Has Life Gotten a Little Noisy??? 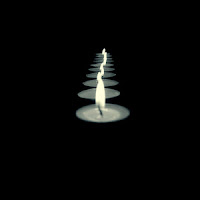 Go into a restaurant alone and sit for a while.  Between the conversations going on around you and the music blaring from a dozen hidden speakers, you may find it rather noisy.  Head into a movie theater and you will hear people talking and cell phone conversations while the movie plays.  Sit in a concert hall and you will probably hear the same thing.  Sit in church on Sunday morning and you hear all sorts of background noise – from the not so whispered conversations to the cries of babies to the sound of kneeler’s and books dropping and paper crinkling.  Most of this noise is accidental.  It is not deliberate.  It is not planned.  It just happens.

There is also a great deal of planned noise around us.  When we turn on a radio or CD player or switch on the TV without sitting down to listen or watch, we are adding planned noise.  It is still background noise but it is not the surprise of a phone ringing or a baby’s cry.  We have been conditioned by the noise in our lives to need that noise.  I know of people who cannot sleep without a TV or radio on.  The sound of silence has become an alien sound to a people surrounded by noise.

Sometimes we added planned noise into the worship service as well.  One writer suggests that we are afraid of losing the attention span of people accustomed to noise so we program noise into the worship service to keep folks from drifting away.  The sound of silence often makes us uncomfortable.  We don’t know what to do during silence.  It is awkward to a people whose lives are defined by noise and activity.

There was a time when silence was more common, when lives were filled with the sound of nothing.  Before work became a 24 hour activity, before electricity made lights and sound cheap and accessible, and before we found a constant need to be entertained, people of all ages knew a good bit of silence in their daily lives.  The down time we cry for has become a foreign and uncomfortable reality.  Silence leaves us too exposed.  So we plan noise.

Churches often plan with the idea that folks are excited to be there, look for the good seats, and expect to excitement – expect something worth clapping their hands to or for.  So many try to give what they think folks expect.  It may be what folks expect but is it what they need?

I wish that I could get away with planning 15 minutes of silence into the Sunday liturgy.  I know that even I would find it awkward - at least at first.  But we need such “down time” to think, to reflect, to meditate, to ponder.  The Gospel is not light entertainment but the story of sin and grace, death and life, loss and redemption.  God has entered space and time with a purpose and plan that will not be complete until suffering has suffered and death is dead.  This is a profound message with great consequences for us.  Isn’t it worth a few moments of quiet reflection?

Amid a world filled with so much noise, it might be intimidating to listen to the sound of silence but it could be very fruitful.  As one author put it, “there was a time when our job was to be quiet, to think about God, to ponder our sin, to pray for forgiveness...”  Instead of rushing to stand up and say something, maybe we need to take that extra time for some quiet.  In the face of such a powerfully story of suffering, death and resurrection it is unnatural and naive to think that we can rush on into the next part of the service.  When God welcomes us with the voice of grace and forgiveness, perhaps the most significant thing we can do is to sit quietly as the Spirit works within us the fitting response of faith.

Advent is a great season for some silence.  Alas, we have trouble with silence and when it occurs in the liturgy I see people look around, wondering, “Who missed their cue?”  But I urge you to take a chance and turn off the radio, turn off the TV, close your mouth, and sit in silence... for a little while anyway...
Posted by Pastor Peters at 5:48 AM

"The Sound of Silence" is an oldie,
but goodie song of Simon & Garfunkel.
But a closer examination of worship
in the Old Testament Hymnbook and
Prayer Book, namely, the Book of
Psalms reveals there was not much
silence. Selah was either a
musical interlude or a silent pause.
But we know there were musical
instruments and much singing, the
people of God in the Old Testament
did not gather to be silent, but to
praise Yahweh.

Something I saw in a Catholic church: after the homily the priest went to his seat, and there was silence for about a minute. After the communion he did the same thing. Not quite your fifteen minutes, but it definitely gives time to reflect on what has just transpired--the forgiveness of sins in word and sacrament.

We do something similar in Evening Prayer, with a half minute or so of silence after each psalm and after the reading (or group of readings, if there is more than one), and we have a somewhat longer silence before the conclusion to the Litany. In other words, we really observe the places where silence is indicated in the office.

Following up on Joe's comment, this past year I spent time in England and made a point of involving myself in the C of E's observance of the daily offices, where possible. The singing of the psalms was most interesting at Durham cathedral where the psalms were song antiphonally and after each half verse a prolonged moment of pause was observed. For me, it had the effect of forcing me to slow down and adjust my own busied and hurried pace to that of the church - timeless, unrushed, patient. It was beautiful!

When I was a little child,
I heard the preacher say,
"Take time to listen for the Lord,
when you kneel to pray,

Be very still and quiet,
for sometime you may hear,
The voice of Jesus whisper,
a message in your ear.

If you do the talking,
He never will get through,
To let you know what it is,
He would have you do."

I did not heed the lesson,
the preacher gave that day,
I hurried through my prayers,
and wandered, on my merry way.

As years went by, I realized,
the many times I'd missed,
A perfect opportunity,
to fill my Lord's request.

If I could retrace my steps,
so many things I'd do,
To be the kind of person,
that my Lord can use.

Now that I am older,
my hearing almost gone,
In the silence I can hear,
a different kind of song.

In a gentle whisper,
from the throne above,
I'm joyfully reminded
of my Savior?s love.

I've finally got the message
the preacher gave that day,
I take the time to listen now
when I kneel down to pray.
Madura Kulatunga

The singing of the psalms was most interesting at Durham cathedral where the psalms were song antiphonally and after each half verse a prolonged moment of pause was observed.

This method of singing the psalms goes back at least to the Middle Ages. I've found references to it among early Lutherans. The long pause occurs only in the middle of the verse; at the end the second choir almost trips over the first one in its haste to get on with the next verse.

When I sing Compline with students (at Concordia, Nebraska) we divide into two choirs for the psalm and insert about two seconds into the middle of each verse. It doesn't work so well with the LSB tones if they are accompanied, but we use an authentic Gregorian tone and sing unaccompanied.