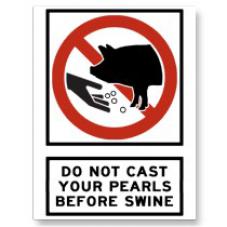 Read a recent account of a visit to a "mega church" on Sunday morning.  A couple of the paragraphs of this Christianity Today story are quoted below (emphasis mine):
To say that the service was religiously "dumbed down" is not quite right. In fact, I wish that were the case, since the goal of comprehension sometimes demands that complex ideas be simplified. No, it seemed rather that the presentation aimed at finding a theological and cultural lowest common denominator in order to attract and engage the greatest number of people. As a result, there was no need to be a Christian to understand most everything that was said or sung.
While church leaders rightly want Sunday services to be accessible, they should also be asking about the limits of this strategy. Ironically, a common complaint 20 years ago was that churches alienated visiting nonbelievers with too much Christian jargon. This was a legitimate criticism. But now it seems the impulse toward accommodating the surrounding culture has pushed churches into making the opposite mistake. Has a passion for inclusiveness deluded churches into supposing that doctrinal or liturgical particularity threatens their mission to a religiously pluralized world?
The apostolic and post-apostolic churches—those nearest to the New Testament era—took a different approach. Modeled after the Old Testament tabernacle, the church was where believers encountered the "Holy of Holies." Thus worship could not be open to everyone. The churches of the third and fourth centuries observed what was called the disciplina arcana (the rule or practice of secrecy) with regard to worship gatherings. This was to ensure that only baptized Christians partook of the Lord's Supper and confessed the church's creed. Hippolytus, a third-century theologian, kept a list of vices and professions that would disqualify one from baptismal eligibility. In a great many churches, the un-baptized, even catechumens preparing for baptism, were dismissed before the church celebrated the Eucharist and confessed its creed.
At some point, style of presentation affects the substance of Christian identity and teaching, often by blunting its sharper edges. It is probably no accident that many contemporary churches offer a diet heavy in biblical images and metaphors, leaving actual biblical theology in short supply.

When the apostle Paul became "all things to all people so that by all possible means I might save some" (1 Cor. 9:22), he did not reinvent or re-orient the faith of which he said, "I delivered to you as of first importance what I also received" (1 Cor. 15:3, ESV).

I do not fault the zeal of those who insist that anything and everything must be done in the Name of Christ to grow the Church and get the Word out.  But I do question the methodology which often takes our theology captive for the sake of the higher cause of saving the lost.  Specifically, I wonder if the means by which we make the Church grow may, in fact, forsake the Church and we will have attracted people to an idea but not to Christ, to a feeling but not to a place, and to a spirituality but not to the Spirit (who works through the means of grace).

I believe that the lost are lost, that those who die outside of Christ will answer to His judgment.  But I also believe that God has elected unto salvation those who will be saved and that we can, should, and must provide the means of grace (Word and Sacrament) so that they may hear and respond by the aid of the Spirit.  What I am uncomfortable about is the take no hostages approach to evangelism in which guilt and shame are used to move us, in which the liturgy and worship in general must be structured as openings for the unchurched to enter, and for the presumption that the Pastor is primarily an evangelist with a little side job of caring for the baptized people of God.

It disturbs me when there are empty pews.  I soul search all the time to reflect upon me and what I have done to make sure I am not putting myself as an impediment against the work of God.  I want my parish and my Synod to grow in numbers as well as in faithfulness and service to the Lord.  But all of this must live within a certain tension of the catholic and apostolic faith, the liturgy which serves as the framework for the means of grace, and the equipping and support of the work of the baptized in worship, witness, prayer, mercy, and service.

What is the greater scandal is when we trivialize this work of God by using gimmicks or bait and switch tactics to mask who we are by methods and worship forms out of step with our Confessions -- all in order to get people in so that we can count their numbers and go to bed at night with a clear conscience.  I bet I am not alone in this...  Lutherans are certainly not on the cutting edge of this but we seem to be excellent followers of those who are.  We are always one generation away from losing the very thing that the Reformation sought to restore and preserve and exchanging our Confession for the practical domain of what will pack them in.  I am not at all suggesting that Christian witness is unimportant or less important than the other aspects of our calling as the Church.  What I am suggesting is that we must be careful to make sure that actually have the authentic Gospel to offer to the people we seek.
Posted by Pastor Peters at 8:48 AM

One of the tendencies of MegaChurches
is to have a sermon series on Old
Testament heroes like David, Daniel,
Esther,etc. The problem is that
these heroes are set up as role
models for daily life, but there is
never any mention of Jesus Christ.

"In this process, however, it seems to me that the church caters to short attention spans and relies heavily on stimulating emotional highs during the service. Instead of facilitating an encounter with the living God, the methods themselves become the overwhelming focus." My question: How can LCMS congregations that have pastors under oath to teach and practice according to the Scriptures and Confessions go down this road and still think themselves faithful?

I pray the following paragraph from The Necessity of Prayer by E.M. Bounds helps to explain how accepting one hour a week devoted to the Lord as being in the faith is not acceptable. If one hour a week is enough than keeping the Lutheran pearls safe is all we can expect along with eternal damnation of us swine in the pews.

“In primitive times preachers were charged to preach by their lives, or not preach at all. So, today, Christians, everywhere, out to be charged to pray by their lives, or not to pray at all. The most effective preaching, is not that which is heard from the pulpit, but that which is proclaimed quietly, humbly and consistently; which exhibits its excellencies in the home, and in the community. Example preaches a far more effective sermon than precept. The best preaching, even in the pulpit, is that which is fortified by godly living, in the preacher, himself. The most effective work done by the pew is preceded by, and accompanied with, holiness of life, separation from the world, severance from sin. Some of the strongest appeals are made with mute lips – by godly fathers and saintly mothers who, around the fireside, feared God, loved His cause, and daily exhibited to their children and others about them, the beauties and excellencies of Christian life and conduct.”

Perhaps it was 10 years ago that
Bill Hybels admitted that his seeker
model did not work. Christianity-
Lite was a failure for his Willow
Creek parish. Hybels concluded that
in-depth Bible Classes for his
members was the only way to correct
the problem. Hybels himself never
attended a seminary and simply was
a "Youth Minister" from the school
of experience. His sermons have no
Gospel content. Sad.