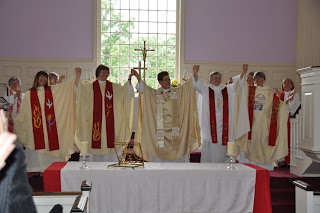 A friend slipped me a link to a Baltimore Sun article on the so-called ordination of more self-proclaimed Roman Catholic women priests.  There is much we could write about here but I noted in the story this claim to legitimacy:

Roman Catholic Womenpriests traces its origins to the so-called Danube Seven, a group of women who were ordained aboard a ship in the river in 2002 by three male bishops. Two of those bishops were never publicly identified, while the third, an Argentine named Romulo Braschi, was called a “founder of a schismatic community” by the Vatican. The seven women were excommunicated, but RCWP believes their ordinations were legitimate, providing the “apostolic succession” that made all subsequent ordinations legitimate.

Therein lies the problem.  Legitimacy lies with those who have the right lineage.  It seems like we have heard this before.  Could it be the claim of the religious leaders challenged by Jesus?  God could make sons of Abraham from these stones...  Jesus clearly rejected lineage as the claim for legitimacy and insisted that line means faith.  St. Paul speaks of the new Israel and the children of Abraham by faith -- in what must have been a personally painful expression given his desire to see his fellow Jews come to faith and their rejection of Jesus.

Apostolic succession is not merely a line of hands but a line of faith.  The mechanics of hands is all well and good but ultimately meaningless unless the faith is maintained.  Luther and real Lutherans have genuine respect for line and succession but where such lineage and such apostolic succession stands in the way of the faith, the faith must triumph so that the Gospel  may be proclaimed.  It is the sad but tragic necessity when line and faith become opposed to each other.

I personally have great respect for apostolic succession and yet this story of so-called Roman Catholic women's ordination shows us the weakness of succession which is but a line of hands without the accompanying faith and community.  These women can claim a line of hands but their breach with the faith sets them outside the community of the Roman Catholic Church.  They have the right family tree but it is on a limb broken off and set apart from the tree.

The issue hits us as Lutherans when any Lutheran Pastor or parish does something that constitutes a break with the faith and with the Church and then claims legitimacy from other sources.  "Schizmatic communities" abound all over the Christian landscape and Lutherans are not immune to them.  Just as the line alone does not guarantee legitimacy, neither does the refusal of the line guarantee orthodoxy.  In the end, it is easier, perhaps, for Roman to disown the actions of such sectarian folks because they have one who speaks for their whole church.  We Lutherans, on the other hand, have no one voice who speaks for us all (even within a specific denomination) and so those who break with the faith but claim the lineage tend to be harder for us to disown.

In any case, confession is never a matter of the right parentage or the even right words but the lineage with the faith once for all delivered to the saints, clearly and faithfully confessed, and rightly ordered and practiced.  Such is the striving of all the genuine Christian congregations and clergy.  Even if these women could show that they were ordained by hands in unbroken succession, their office would be null and void since they have by that very act betrayed the faith they claim.
Posted by Pastor Peters at 7:40 AM

This is another case of seeing something from the outside and not seeing it as it is itself.

These ordinations are invalid on purely Catholic grounds. It is not a matter of ex opere operato. And even when that applies, for any sacrament to be valid in Catholicism it must be correct in matter, intent and form.

Here, the defect is form. Christ does not call women to be pastors in His Church, and even if a woman is ordained by a thousand bishops in apostolic succession no sacrament is confected. Similarly in marriage, also an RC sacrament, the rite of marriage may be correctly performed, but, if one of the parties is in fact already married -- the defect of form -- no sacramental marriage happens.

The argument that these are in fact valid ordinations is that Christ indeed can and does call women to be priests, that maleness is not essential to the priesthood but like celibacy simply a human regulation, therefore, if the church holds these human regulations to be on the order of divinely established essentials, one can in Christ step outside them.

Catholic women priests is a non sequitur! I spend some time over on the Catholic Answers Forum where the Catholics have oft reminded us Lutherans not to be too critical of schismatics as Martin Luther was a schismatic.
They do have a point, I guess.

Why would a Lutheran waste one second on a "Catholic Answers Forum", or Catholic anything else?

They do have a point, and, as usual with Rome, it completely misses the point.

"Schismatic" according to who? The RCC of course, which as an institution has been schismatic from the Gospel for centuries.

Judas H Priest in therapy, were I to join a group that holds to what the RCC taught me was the Catholic Faith to depart from which is schismatic, I would be in a group the RCC now calls schismatic.

The hallucinations of any aspect of the RCC have utterly nothing to offer us. Whatever.