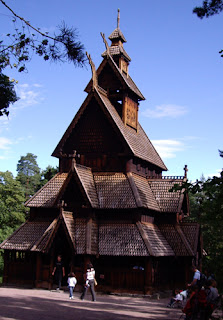 Old news, perhaps, but worth a mention:

In an unprecedented move this week, the Norwegian Parliament voted unanimously to abolish the national Church. Considering that 72% of the population (3.6 million people) are non-believers, it may not be a very surprising move, but it’s still noteworthy.


This amendment  will start with the following steps:
The following things will not be changed:
"The Committee notes that the constitutional changes resulting from the settlement the church intends to clarify the Norwegian churches free position as religious communities. This means that the religious activities of the church will no longer be the state’s task. However, it is government’s task to support the church as a religious community, and to support other religious and philosophical alike. The Committee endorses the understanding that the changes represent a new basis for the development of the Norwegian Church as an independent religious communities. The Committee would also emphasize the importance of establishing security for the changes contribute to the preservation of the Norwegian Church’s mission to be an open, inclusive and democratic national church.”

What intrigues me most is the name.  The People's Church?  Really?  That is the best you could do after waiting, well, nearly 500 years?  So if you had a naming contest you would have gotten a better name than The People's Church.  Did a committee pick this name?  Geesh... and I thought the Lutheran Church-Missouri Synod could have been better named.  Why not the Lutheran Church-Norway Synod?

Or, perhaps, this is exactly the name that befits a church no longer Lutheran?  Oooops.  Did I say that outloud?
Posted by Pastor Peters at 6:00 AM

Despite the fact that German princes saved Lutheranism, the nationalization of churches in
Europe have added to their decline in theology.

Perhaps the name People's Church is a poor translation. There is a history of this name connected with (and contrasting with) the state church, Statskjerka. Norges Folkekirke, or Folkakjerke, could also be called the popular church of Norway. Of course to everyone else it will still be the church of Norway, since there are other free churches.

I would argue that the churches in Norway have become museums.

Why have most Scandanavians decided in recent years that religion is trite and unnecessary?

I believe that, even when the State Church becomes disestablished, there will still remain a legal requirement that the monarch remain a member of the "People's Church" (which sounds like an institutional title taken from Aldous Huxley's *Brave New World*).

More generally, this is the product of a long series of manoeuvers on the part of the liberal elite in Norway to subordinate the State Church to the consensus of bien-pensant public opinion. As early as 1938, in the "Lex Mowinckel" (which opened all civil service positions to women) it became legally possible to ordain women, but the bishops refused to act on it -- and because the State Church bishops accrued a great deal of moral credibility due to the stance and actions during the Nazi occupation (1940-45) it was hard for the State to exercise coercion upon them (as happened in Sweden over WO in 1957-60) or to expect their supine acquiescence to whatever the civil authorities might decide (as happened in Denmark over WO in 1946-49), so the State had gradually to undermine the Church by

(1)fanning a controversy over the universalist teachings of a State Church bishop in the early 50s, who was made to appear "open" and "forward-looking" in the face of obscurantist colleagues;

(2) pushing the WO issue (in the press especially) in the face of opposition from the vast majority of the 10 State Church bishops, so that eventually 2 bishops were willing to proceed on their own to "ordain" the first women in 1961 (although opponents of WO still continued to be appointed bishops as late as the early 1990s they had become a small minority by then, and the last of them retired in 1998;

(3) attacking (and eventually prosecuting and defrocking) pastors who opposed, and organized opposition to, the liberal abortion law that was enacted in 1975 or 1977 (a great number of pastors and some bishops opposed this law), and so intimidating the clergy into silence and turning the bishops into quislings;

(4) appointing the first woman bishop to the Hamar diocese in 1992, despite her relative unpopularity there, as compared to other, male, candidates -- and subsequently beginning to make life difficult for opponents of WO in the State Church (pastors in the State Church opposed to WO had a degree of legal protection, more than in any other Scandinavian Church, but parishes or congregations opposed to WO had none); &

(5) from ca. 1994 onwards subjecting the then majority of the bishops (7 out of 11) to pressure and ridicule over the policy of not ordaining openly "partnered" homosexuals or allowing already ordained "partnered" clergy to be appointed to pastoral positions such that, in the end, the bishops capitulated on that issue, too, 4 or 5 years ago.

One Norwegian Cabinet minister in Norway declared, around the time of the appointment of the first woman bishop, that on these issues "the State must lead, the Church must follow;" and another politician later stated that the State had the task of "bringing enlightenment" to the church on these matters. A cynic might observe that the Norwegian State "used" the Church of Norway in a manner analogous to the way in which a client "uses" a prostitute, with the exception that the Church of Norway received no payment "for services rendered."

How about The Church of Nothingness

nice posting.. thanks for sharing.