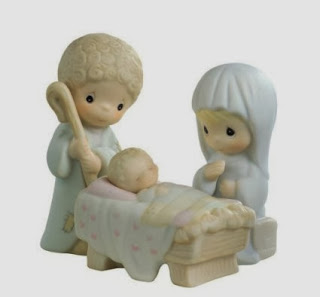 For Bart Gingerich, a fellow with the Institute on Religion and Democracy and a student at Reformed Episcopal Seminary, becoming Anglican was an intellectual journey steeped in the thought of ancient church fathers. He spent the first 15 years of his life in the United Methodist Church, where he felt he was taught a “Precious Moments” version of Christianity: watered down, polite, and unreal. His family joined a nondenominational evangelical church when Gingerich was 16. Some of the youth he met were serious about their faith, but others were apathetic, and many ended up leaving the church later on.

In the American Conservative, author Gracy Olmstead argues that Millenials are fed up with the Christianity Lite or "Precious Moments" Christianity of sentiment over truth and feeling over liturgy. That is true enough, to a point.  It is not simply liturgy that wins them over but doctrinal truth, unchanged and unchanging, which is expressed on Sunday morning in the ancient and catholic liturgy of the Church that is making Millenials take notice.  Whether the Western Catholic form and content or the Eastern Orthodox faith and liturgy, Millenials are searching for truth that is true for all and forever and for worship which not only mentions this truth but conveys its grace in the reality of sacramental forms (water, bread, and wine).

“If you ask me why kids are going high church, I’d say it’s because the single greatest threat to our generation and to young people nowadays is the deprivation of meaning in our lives,” Cone says. “In the liturgical space, everything becomes meaningful. In the offering up of the bread and wine, we see the offering up of the wheat and grain and fruits of the earth, and God gives them back in a sanctified form. … We’re so thirsty for meaning that goes deeper, that can speak to our entire lives, hearts, and wallets, that we’re really thirsty to be attached to the earth and to each other and to God. The liturgy is a historical way in which that happens.”

The sad truth ix that folks from my generation have let our preoccupation with self and feelings turn faith and worship into the certainty you cannot know for certain except in how you feel and what you want.  Our truth is only one person wide and one person deep.  Our worship services are shaped by the extensions of our preferences and desires with the assumption that if we like them, God will, too.  Our children and grandchildren cannot abide the kind of "Precious Moments" Christianity long on sentiment and entertainment and short on objective truth and reality.

The desire from the Millenials is not for form without substance but for substance which has a form and churches dare not confuse this as one more program or methodology to fill the pews.  Lutherans should be well poised to capitalize upon the changing landscape but we are not.  The folks my age are still trying to turn our garage rock groups into praise bands and afraid of ceremony and ritual as if these were the undoing of religion.  We long for a simple religion which is casual and flexible instead of the mystery of the Holy Trinity and of the Incarnation.  Where Lutherans are healthiest, Lutherans are really Lutherans and not Protestants with a twist.  Where Lutherans are Lutheran, young people are attracted.  Where Lutherans are Lutheran in faith and worship, there is a vibrant church with something to offer a people no longer content with casual, come as you are Christianity Lite.

The millennial generation is seeking a holistic, honest, yet mysterious truth that their current churches cannot provide. Where they search will have large implications for the future of Christianity. Protestant churches that want to preserve their youth membership may have to develop a greater openness toward the treasures of the past. One thing seems certain: this “sacramental yearning” will not go away.
Posted by Pastor Peters at 6:00 AM

I pray God that this is true and our LCMS would encourage all of our pastor's and leaders to read that article. I'm tired of the contemporary worship efforts. We had an Easter Service that was so loud with a praise band acoustical guitar/drum/microphoned singers etc that our pastor actually encouraged those with hearing aids to go across the hall and enjoy breakfast on the church. Imagine?!!! Egg Casserole or Holy Communion. Take your pick. What has happened to us?

I believe it...it is what brought me back to the Lutheran church. I find so much comfort in the traditional, solid word and solid worship. I don't want it to change. Even the traditional worship service reminds me that God is the same, yesterday, today and always. Just because the world changes doesn't mean He has or will. And a plus side to the Lutheran service, that I love, is the respect given to the Lord's alter, table, house...Too many people have lost all respect/reverence for the sanctity of the Lord's house and sacraments and a resurgence of that reverence would be nice to see!

Every summer, we plan these crazy youth conferences where liturgical worship services are using our hymnal. Accompanied by an organ. 3-4 times a day. Young people are challenged to learn, in-depth, about their faith from any number of angles. We do all the things that the "experts" say doesn't work to attract young people, and it's amazing to youth respond to it, very favorably.

First of all let me commend you on an excellent article which certainly contains a lot of talking points which need much more time and space.

You have hit upon a conundrum within the whole Christian Church and that is why so many young people are leaving our churches. You may be walking on slippery soil by attaching other Christian denominations while missing the plank in your own eye? Many of our Lutheran youth are not attracted to our form of worship, which some could say is archaic and belonging in past generation

When Luther came on the scene he immediately translated the bible into the language of the people, and so should it be with worship.

To be stuck in the past with music some say reminds them of a funeral dirge, rather than a joyful expression of true faith, misses the true meaning of the Universal Church of all ages.

Enough said, I agree wholeheartedly with our Liturgy being passed down through the ages, but Lutherans need be less judgmental, especially when we are a shrinking denomination.