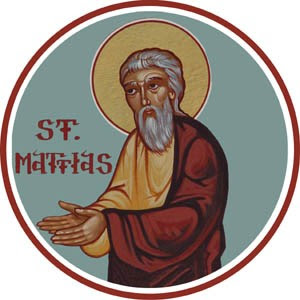 
Matthias is the most unremarkable of the Apostles. We remember him only because of Acts 1 and we take Scripture seriously.  We know next to nothing about him, where he served, or what he did from that moment in time forward. His symbol is an axe because we believe he was beheaded – the presumption is for his faithful proclamation of Jesus Christ.  But even in death he is an enigma to us.

Funny thing is that we know more about the other name the apostles put forward than we know of Matthias.  Joseph called Barsabbas, also called Justus.  Both of these were followers of Jesus, witnesses of the resurrected Jesus.  Matthias is but a footnote in God’s history, chosen by lot to fill the open spot of Judas among the Twelve and to preach the Word and administer the Sacraments of Christ.

We all want exceptional pastors, dynamic preachers, charismatic leaders, and giants among men.  What we get are ordinary men whom God calls to do the work of ministry.  We all want special people to serve us but God largely uses ordinary people to do His extraordinary work of Word and Sacrament.

Matthias was a follower of Jesus and a witness to the risen Lord and that is all we know of him.  He would hardly make the final cut on any call list today.  We look for more than a name.  But the Lord has given not spectacular pastors and leaders to His Church but a spectacular Word that delivers what it says and spectacular Sacraments that bestow what they sign.  That is enough.

If those given responsibility for the flock of God will preach the Word of God faithfully and administer the Sacraments of God faithfully, God will do the rest.  He will call people to faith, nurture the faith of the new believer, strengthen the weak, sustain those under trial, equip the faithful for good works, multiply the Gospel through their many voices, and finish His new creation.

No doubt the early Church was shocked and dismayed at Judas’ treachery, deceit, and self-inflicted death.  They were surely looking for someone who would turn out better than Judas.  Did they get him?  We do not know.  What we do know is that Matthias was chosen by God’s lot.  We know that God knew and understood the right person for this time.  We know that even Judas did not prevent God’s noble purpose but in his wickedness his terrible work of betrayal was used in the plan of God hatched from before the foundation of the world, to save the heirs of Adam and Eve from sin and its death.

We find this little episode strange.  Why would God call Matthias if He had planned to call Paul as an apostle?  Why would we be told of this only to have the name and the person disappear into history?  God does not explain Himself to us.  But surely if this whole story seems strange to us, how do you suppose Matthias would see a congregation, church council meeting, call committee, seminary, admissions committee, etc...  Would these not seem even more strange to the early church than this little story is to us?  What might Matthias think of the way that I was called to Grace Lutheran Church?

Matthias is not a prototype of how the Church is to select pastors.  His election is the only time in the whole of the New Testament where lots are cast to select an apostle or a pastor.  After the coming of the Holy Spirit this method disappears.  The apostles raised up pastors, training them in the Word and setting them apart by the laying on of their hands (ordination).

If there is anything we get from the election of the unknown Matthias it is this.  God will work to build His Church.  The means are the means of grace.  The men are tools through the means of grace are manifest to the people.  We have confidence in the office, in the means of grace, and not in the man.  And that is enough to know...  Matthias did what the Lord called him to do.  We have no clue to what it was except the common call to proclaim the kingdom of God.  But no matter where or through whom that call comes, people hear and repent of their sins and believe in the Lord Jesus and have life and forgiveness in His name... for now and for all eternity.  To this all we can say is Thanks be to God!
Posted by Pastor Peters at 6:00 AM

“What we do know is that Matthias was chosen by God’s lot.” Every time I see this phrase repeated, I am astounded at how people can, in total piety, repeat something that is so obviously false. It was not “God’s lot”; it was Peter’s. By the time it came to casting lots, God’s only choice was between two people. Had Peter said, “Let us cast lots to see if we should choose who will replace Judas” there might never have been a controversy. But, I believe, there is a reason why all of this happened:
In Acts 1:8, our Lord tells His disciples, “But you will receive power when the Holy Spirit has come upon you …” They received this power, which has remained unique in the history of the Church, on Pentecost. Until that time, they were just like you and I, ordinary Christians, who had just received the Holy Spirit forty days earlier. Although they loved their Lord, they made mistakes. But the Church could not wait for the years that it normally takes people to reach spiritual maturity, so the Lord endowed them with special powers. That first chapter of Acts is given to us so that we would not despair of our faith because we are not like the Apostles after Pentecost. We do not have those special powers.
In John 15:16 our Lord defines how Apostles are chosen, “You did not choose me, but I chose you.” But Peter could not remember those words.
Check out the Scripture Peter quotes in Acts 1:20 to support his actions. It will immediately become clear to you that the second passage does not support Peter’s action.
Acts 2:14, the next chapter after the election of Matthias, “But Peter, standing with the eleven …” Not the twelve.
On 16 occasions St. Paul, who was definitely called by our Lord, calls himself an Apostle. Was he wrong, or could there have been thirteen Apostles? Revelation 21:14, “And the wall of the city has twelve foundations, and on them are the twelve names of the twelve Apostles of the Lamb.”
There is no doubt in my mind that I will never be as good as person as Matthias was, but I also believe we have something in common: neither one of us is an Apostle.
Peace and Joy!
George A. Marquart

Marquart: I'm somewhat confused. Are saying that the Apostles should not have attempted to replace Judas?

ginnie: yes. But I am also saying that it happened for our good, just like many other “bad” things that happened in Scripture, that are recorded for our good.
George A. Marquart