We always presume that we are so smart an that we can do what cannot be done.  So we decry the costs of one energy source in pursuit of that which is safe and cheap and easy (sort of like sex).  Everything worked fine in the test except for the fact that we cooked some birds in the process.  No, I am not opposed to solar -- just to the idea that we are smarter than God or that we can find a way that is pure, righteous, and holy.  We live in a sinful world, with a creation groaning in expectation of the new and eternal day, and until then we are not as smart as we think and we cannot find the pure path without cost and safe for everyone and everything.  Maybe we should not stop trying but maybe we ought to surrender our hubris that we are at least as smart as God and better at figuring His creation out than He was in making it.  Read about it here or check out the snippets below.

Supporters of renewable energies hope that new advances in solar technology will figuratively set the world on fire, but for hundreds of birds in Nevada last month, that scenario became a literal reality. Nearly 130 birds were set alight mid-flight during tests for the new 110 megawatt solar array plant in Tonopah, Nevada.

The Crescent Dunes Solar Energy Project uses 17,500 heliostat mirrors, each the size of a garage door, to direct sunlight to a central tower rising 1,200 feet above ground level. The combined energy is transferred to molten salt held in the tower, which is circulated and produces steam to generate electricity. Excess heat is stored in the salt, allowing electricity to be generated for up to ten hours without sunlight...
On January 14th, about a third of the plant was brought online for testing. Unfortunately, about two hours into the test biologists and engineers on site began to notice “streamers” – trails of smoke and steam caused by birds flying into the field of solar radiation. Any moisture on the birds was instantly vapourised, whilst some of the birds themselves burst into flames even as they flapped away. Nearly 130 birds were killed or injured during the test... 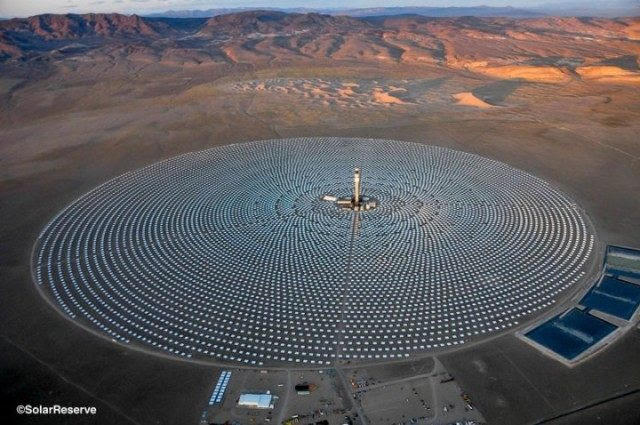 Federal wildlife officials have begun referring to the solar arrays as “mega traps” for wildlife, despite protestations by Ivanpah officials that the streamers are floating rubbish or insects straying within the field. But biologists believe the streamers are caused by a chain of reaction, as insects attracted by the tower’s bright light in turn attract bird species.
Posted by Pastor Peters at 6:00 AM

When fully operational the 110MW Crescent Dunes Solar Energy Project will reduce the nation’s reliance on fossil energy supplies by only 0.03 percent.

One would need over 300 such solar projects to reduce the nation’s reliance on fossil energy power plants by 10 percent.

These cooked carcasses would mostly land on the solar mirrors, necessitating a large enough night crew to clean and repair the mirrors and dispose of the (dead and injured) burnt birds.