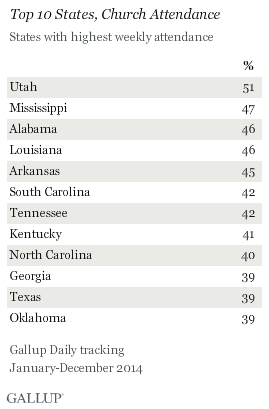 There are states with respectable numbers with regard to church attendance. It is always a good thing when say 40% church attendance happens.  I am fortunate to live in one of them, Tennessee, and am surrounded by others.

We should cite these as relevant statistics in the arguments of whether or not Americans are a religious people and whether or not faith is vibrant and vital in this land.

We should not be content with these statistics or let them define for us whether or not the work of the kingdom is done.  God does not watch statistics but has called us to proclaim the Gospel to every corner, to call the world to faith in Christ, to repentance of their sins, and to deny themselves, take up their cross and follow Him.  That does not stop because of good stats and it does not become more urgent because of bad stats -- it is what the Church does because of who she is.  Period. 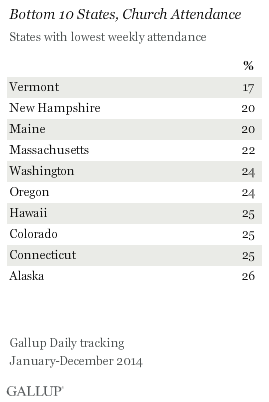 There are places where religious adherence and where faith is less vital than in other places.  Sadly, these are the very places where faith brought our forefathers to this nation, where the halls of government and the leaders of our country are located, and where many of the esteemed institutions of learning are found.  None of this is good.

It is a sad state of affairs when the oldest of the colonies have become places where the faith and the faithful are the least vigorous -- thinking that one of the basic measurements of vitality is actual church attendance and not simply the numbers of names on a membership roll.

It is also a dangerous thing when the institutions of higher education, schools that receive disproportionate respect and esteem, are located in pockets the least friendly to the faith and the least tolerant of the faithful.

The ugly is this -- the Gallup organization does not differentiate between orthodox Christianity or sectarian and distorted or false expressions of Christianity.  So the numbers for Utah, for example, are highly affected by Mormon church attendance though Mormons reject Nicene Trinitarian doctrinal formulation and the Christology of Chalcedon which would be basic for any Christian orthodoxy.

The ugly is also this -- the reporting of church attendance is highly subjective and requires the people being surveyed to remember for themselves and to recall accurately how often they attend.  I fear here that too many people have a faulty recollection that favors a higher church attendance than is true simply because people tend to think this way.  So, good or bad, the actual numbers may not be even as high as was reported here. . .
Posted by Pastor Peters at 6:00 AM

I agree with you. Church attendance is subjective because a large apostate body may have a false message and a huge following, while the little church off the beaten track may be a real church which follows Jesus in spirit and truth.

...that does not change the fact that proclamation isn't happening, and this *might* be a factor behind the stats. We're nit to become overly involved with statistics, but they shouldn't be ingored, either; perhaps we should condier them a latter-day Balaam's ass?

Rather than statistics on "Church Attendance," the Gallup data are what people, via random-digit-dialed landline and cell phones, claimed about their attendance at a church, synogogue, or mosque. The margins of error for individual states was no greater than ±6 percentage points, and are ±3 percentage points in most states.

Here is a link to a U.S. map showing the Leading Religious Bodies, 2000, in all counties.

Here is a link to a U.S. map showing the Largest Participating Protestant Christian Denomination by County, 2010.

From the maps, one notes that the LCMS is the largest Protestant denomination in Perry County, MO, but the Roman Church is the largest religious church body. OTOH, in Lee County, TX, where Rev. John Kilian (a classmate of Walther) and the Wends settled around the Serbin area, the LCMS churches are twice as large as the Romanist churches.

The map of the Largest Participating Protestant Christian Denomination by County, 2010 also shows the LCMS is the largest Protestant denomination in Del Norte county, the most northwestern county in Caifornia.

It seems that the LCMS contribution is entirely due to the one LCMS church, Grace Lutheran Church, in Crescent City.

But this doesn't tell the whole story, where the religious organizations with the top percentage of religious adherents are:

However, only 21% of Del Norte County residents are adherents to any religious organization.