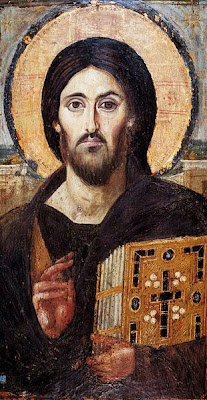 Once while explaining the Ascension in catechism class, a youth said it finally made sense to her.  The world is in such a mess because Jesus left and went to the right hand of the Father.  That explained everything to her, if only Jesus had stayed, things would not be so bad today!  And maybe sometimes we feel that way as well.  If only we could see Jesus, talk to Him, hold His hand... If only Jesus were still here in visual shape and form to lead and guide us things might be better.

Of course, she was confusing what Ascension means.  Jesus was not leaving a forwarding address and bidding good-bye to His church.  He was not exchanging one geographical location for another but was taking His rightful glory at the right hand of the Father, who after Christ’s death and resurrection, placed all things under His dominion.

Is there any one of us who has not longed for a closer walk with Jesus -- not the one by faith but one like the disciples had when they accompanied Jesus in His earthly ministry?  But that is the point, Jesus has not left us but has come to us in the means through which He will build His kingdom.

In this respect, Jesus was exchanging one form of His presence for another, giving up His visual form for His sacramental presence in His Word, the water of His baptism, the voice of His absolution, and the bread and wine of His meal.  Jesus has not left us alone or on our own but is exactly where He has placed His name and His promise – in the means of grace.  He is there not only for the benefit of those already His but to bring those not yet of His kingdom into the fold of His sheep.

This is so that we might never have to wonder where is Christ.  He is always where He has promised to be – His Word is the sound of the Good Shepherd’s voice still calling to His own and calling His own out from the ways of danger to the good pasture and still quiet waters.  His water has His Word and promise in it so that it never fails to do what He said.  It matters not if it seems that the troublesome child who went down into those waters seems the same kid who came up.  Behavior is not the only nor even the primary measure of God’s work.  Faith and trust are the fruit of the Spirit’s working through the means of grace.  We need never wonder if it is merely bread and wine for wherever Christ’s Word addresses the bread and cup it declares these to be what He has promised: His flesh for the life of the world and His blood that cleanses us from all sin.

But there is one more place where Christ lives.  He lives in you – oh, not in the way the old song says “because He lives within my heart.”  This is surely well and good when our hearts are full, our joys complete, and our lives happy but when feelings fail us we need Jesus more than in a feeling.  Christ lives in us because in baptism we died and He created us anew, a new creature, to live in Him, with Him, under Him, in His kingdom without end.

Christ lives in you and, as St. Paul reminds us, it is Christ in you who brings forth good works.  The good that I do is not me but Christ in me.  Christ lives in you and is even now in you – not because you feel Him or even sense Him but because He has promised this.  You are His new creation whom He cannot abandon and through whom He works to bring for the good fruit of His kingdom that endures forever.

We do not see this.  We can see no line of moral progress or growth in holiness but that does not mean it is not there.  Our focus is upon Jesus and upon the means of grace where He is accessible to us.  Others may glimpse this growth in sanctification but God sees it and recognizes it as Christ’s own righteousness bearing its fruit in us and through us.  We don’t have to see it and we should not or we will be tempted to think we are doing okay and the cross will no longer be our hope.  But they are there because we live in Christ, we are connected to Him by faith, we receive Him in the means of grace, and He always does what He has promised.

"But we all, with unveiled face, beholding as in a glass the glory of the Lord are changed into the same image from glory to glory, even as by the Spirit of the Lord."   (2 Cor. 3:18)

Salvation is the purest and holiest of gifts.  But it is not a thing nor is it a pass on our sins.  Salvation is a living gift that enlivens us.  The old man was dead in trespasses and sin but the new man has been raised to new and everlasting life.  This new creation is Christ in us so that we might cooperate with the Spirit in the good works that God is doing in us and through us and the end result of this is that we attribute all to the action of God working as He has promised in His grace and mercy and not to our own distinct wills and power.

". . . God makes willing  people out of rebellious and unwilling people through the drawing power of the Holy Spirit, and how after this conversion of  the human being the reborn will is not idle in the daily practice of repentance but cooperates in all works of the Holy Spirit that He accomplishes through us."  SD FC  II:88

So do not fear that Christ has left you.  He has come through the means of grace to deliver to you all that He won by His obedient death and His glorious resurrection.  He has ascended to the right hand of the Father to plead for us, to claim us as the children of our heavenly Father, and to bring us with Him when He finishes His new creation.  And when you look into the mirror, look with your eyes of faith to see what the eyes in your head too often miss – You belong to Him and He is at work in you bringing forth the good works of Him who has called us from darkness into His marvelous light.  For your glory, yes, but more importantly, for His glory forever more.

nce when explaining the Ascension of our Lord to catechism students, one youth remarked that it all made sense – but not in a pleasant way.  Jesus left and that is why the world is in such a mess.  If Jesus had stayed, things would be better.
Posted by Pastor Peters at 6:00 AM

Hi i was browsing your blog and i found it really interesting! i too have a website.Kindly check it out here guide to full disclosure

Very awesome!!! When I seek for this I found this website at the top of all blogs in search engine.
ascension with earth