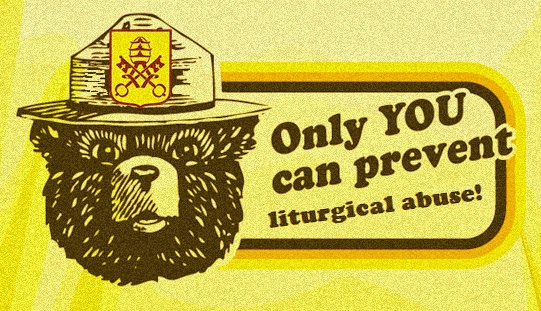 For the last forty-five years or so, the Roman rite has known many Eucharistic Prayers. Four Eucharistic Prayers are appointed for the Mass and there are two additional available for reconciliation masses and three for children's masses (I was never sure what exactly the point of these were). Though the GIRM had instructions on the intended use of these Eucharistic Prayers, the practical reality was that they became part of the personal preference of the presider and, too often, were chosen for the sake of time considerations and little else. It may come as a surprise to many that this was not always so. For some 1600 years pior to the aftermath of Vatican II, the Roman rite knew but one Eucharistic Prayer and it was not even routinely called a Eucharistic Prayer but simply the Roman canon. Roman Catholics are debating this issue and will for some time and well they should. The point of my mention is that liturgical change did not evolve incrementally in the 1970s but took giant steps that not only incorporated significant change but also put in place significant choice.

Lutherans were not far from Rome in this matter. Where the hymnals of 1941 and 1958 left Lutherans with one text (albeit with several musical options in SBH), the Divine Service was uniformly consistent and the other options for Sunday morning were either a "dry mass" (ending with the offertory) or Matins. That all changed for Lutherans when the ILCW began sending out options for trial use in preparation for the expected joint Lutheran hymnal. From the get go this was understood to be the same kind of radical change that Rome had already introduced. The LCMS had already seen several versions of the Eucharist introduced in 1969 with the publication of the Worship Supplement. What also impacted Lutherans was the fact that the photocopier and the beginning of desk top publishing had left them unofficial options for introducing change and diversity -- unintended but still very real and very popular.

Liturgical change prior to the 1970s was almost always incremental. The mass evolved slowly and deliberately and those generations apart would recognize clearly what was familiar and common to both. All of that changed when the myriad of options came with both official sanction in the worship books published and unofficial practice. LW tried to slow this pace by offering a somewhat altered tie to the past in a Divine Service that mirrored page 15 of TLH. LSB was much more deliberate in including as close as possible the familiar common service Missouri version. At the same time, however, it added options -- the Divine Service, Setting Four, which absorbed the modern format of the Deutsche Messe as well as Divine Service, Setting Five, which followed the familiar Luther version of that mass in which hymns replace the ordinary.

Unfortunately, the changes of the 1970s that were due to desk top publishing and printing that now mirrored the quality of professional publishing houses has only broadened the diversity that happens among Lutherans on Sunday morning. For what its worth, I am NOT referring here simply to the reintroduction of ceremonies or ritual from Lutheranism's past but the actual restructuring of the Divine Service or the replacement of that order with another. I consider the use of a more elaborate ceremonial within the parameters of the Divine Service not the same kind of liturgical change as, say, the replacement of the hymnal order (or orders) for the loosely organized liturgy of a seeker service or the adoption of a generic Protestant style liturgy of the Word. While some may argue with me here, when the ordo or pattern and words of the Divine Service remain, albeit enhanced with items that had been missing from more recent incarnations of that liturgy, it is not at all the same as the replacement of one liturgy for another of non-Lutheran (or to use a more confessional term, non-catholic) form.

Ours is a much different situation than Rome. We do not have a GIRM which requires adherence but a long standing congregationalist tradition of local adaptation -- one that was fueled by the rapid character of the official liturgical evolution of the hymnals but which has left even this diversity in the dust by giving free reign to whatever the local congregation and pastor choose to do. If Rome's complaint is that such liturgical giant steps and diversity of practice has created chaos for their people and the understanding of their piety, how much more is this true for a Synod like Missouri which knew relatively little liturgical diversity until the 1960s at the earliest and the 1970s for officially sanctioned change.

Liturgical development is best when it is incremental, when it builds clearly upon the past and does not institutional radical departure from that past, and when it eschews the personal freedom of the pastor and parish for the sake of a commonly recognized order that mirrors our confession and gives high value to our common life and walk together. The reason for this is not simply institutional health but the preservation of the identity of the church and the faithful with the church and the formation of a piety which is shaped by, flows from, and returns to the Divine Service. If this is true from Rome, it must also be true for Wittenberg.
Posted by Pastor Peters at 4:00 AM

I agree with your thesis that "incremental" changes are much better, but only where necessary and with wisdom. The changes you described in the worship service and liturgy, when offered as "optional"......result in chaos and confusion, and disrupt the identity of the church. I believe some changes are good, but sometimes changes are not necessary in the first place. Historians say that every generation of people have a desire to redefine and change the way we live....and new technology aside....the results can be considered questionable by the previous generation still living.