The fruits of modern higher criticism of the Bible. . . 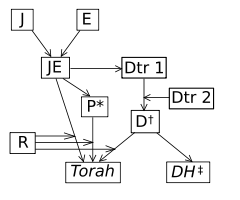 Some folks are offended by the very idea of textual criticism.  They should not be instinctively antagonistic toward this discipline.  It is not the same as the higher critical movement which has decided the individual parts are worth more than the whole of the Biblical text we have now.  Further, it is a legitimate discipline in which the edge is still with the authenticity and accuracy of the received text of Scripture.  In contrast, the modern higher critical methodology has done little but undermine our confidence in the received text, has contributed pretty much a big zero to the preaching and teaching task, and has left us less than convinced that the readings on Sunday truly are the Word of the Lord.

B16, the former and better than current pope, is a fine scholar and has written more than a little on the limits of modern higher criticism and its undoing of the text.  You can read some of it here. . .  He finds the problem with this approach is that “it did not pay sufficient attention to the final form of the biblical text and to the message which it conveyed in the state in which it actually exists.”  The basic charge with modern exegetes is that they forget that “the text in its final stage, rather than in its earlier editions … is the expression of the word of God."  The missing element—the central fatal flaw—of the method is its unwillingness to realize that “faith is itself a way of knowing.”

He certainly gets it.  Unfortunately, many Roman Catholic exegetes have joined the ranks of the liberal Protestants who think that the chief job of the Biblical scholar is to undo the text, undermine what it says, and undercut the confidence of the people of God in the Word of the Lord.  Would that more Roman Catholic exegetical theologians listened to Bp Ratzinger and Benedict XVI.  The end result of most modern higher criticism is not a conclusion except the one that says what we thought we knew was wrong but we have nothing but fragile theories to replace what we thought we knew.  Meanwhile the rest of us know that this is not enough.  Faith is its own way of knowing.
Posted by Pastor Peters at 6:00 AM

The correct biblical tension that saving faith is both the duty of man and is the gift of God through regeneration is a
doctrinal position - pray it be so, Amen.

Pope Benedict was indeed a great scholar , his book Jesus is a fine example of his brilliance and respect for the scriptures.

Too bad he stepped down.

Higher Criticism is the most dangerous threat to the LCMS. Here is a perfect example: