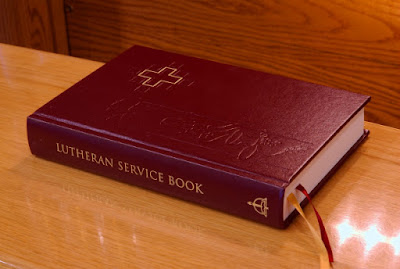 It is easy to shoot for what is familiar and safe.  Too often that is all we aim for.  I have been in congregations where the same couple of dozen hymns were sung over and over again.  The rationale was often put in the context of that is what people like, that is about all we can handle musically, or that is what is easiest.  None of these is a particularly good reason for choosing the hymns of the service.

I know that there are people in my parish who do not like that we sing as many hymns from the hymnal as we can through a given year.  I know that there are those who would be happy as a clam if we sang the same couple of dozen hymns they like -- the only problem is getting everyone to agree on which couple of dozen they like!  I know that some people groan when they turn in the hymnal and find out it is a two page hymn or one with a gazillion stanzas.  I don't choose the hymns to make people angry but because it is a good thing to know the whole hymnal, hymns are chosen for text and with the three year series we have a lot of texts to connect with in choosing hymns for the day, and because we need to learn a new hymn every couple of weeks to expand the realm of the familiar (if only by baby steps).

There are pastors who complain that not all hymns in Lutheran Service Book are of great quality.  I suppose that this is true.  I am not as bothered by the use of hymns less compelling than others -- at least not as bothered as some folks who regularly vent their frustration on the internet.  We even sing "Earth and All Stars" every now and then.  No, you will not get me to say you should narrow the numbers of hymns you choose and sing on Sunday morning.  Naturally we do have an affinity for Lutheran hymns -- if we don't sing the great chorales, who will???  But that is not all we sing.  We regularly add hymns not in LSB (including some that did not make the cut from either TLH or LW) as well as newer hymns not even written when LSB was published!  I have written some hymns (not nearly as easy a task as some might make it out to be). Singing requires effort and voices need to be stretched -- and our repertoire needs expanding as well.  This is a not a bad thing.

The same is true of the choir.  Too often Lutheran choirs never even venture to sing the compositions of great Lutheran composers of the past or present.  Too often Lutheran choirs sing what is easy and popular (way too much contemporary sounding stuff that is more at home in another denomination than our own).  Yes the choir is a volunteer group and they do not all read music and some of them complain loudly when asked to work a little harder than they would like.  But go for it!  Our choir is a group of about 30-35 folks of varying musical ability and yet they regularly sing the great music of the masters (the old ones and the modern folks -- from Rutter to K. Lee Scott).  They regularly surprise themselves by doing a credible job with music that IS difficult to sing.  Our best for His glory, that is the point.

I will admit to some frustration that Lutherans tend to be infatuated more with the music of other traditions.  Why does the church that produced Bach find itself loving spirituals and American Gospel songs more than the great Lutheran chorales????

When our new Associate Pastor is installed, the choir will sing Parry's "I Was Glad" (Psalm 122), Mendelssohn's "How Lovely Are the Messengers" and a Rutter piece as well.  We will find the money for some strings and brass players to make sure this is a blessed occasion in which the various components of the liturgy are up to the glorious event that is taking place.  And we will do it in mid-July, to boot!!

If you are doing worship planning, stretch the boundaries.  Do not skip the hymns with challenging melodies and thoughtful texts to find those which are easy and popular choices.  Do not presume that your people are incapable of doing more challenging music.  Give your people the chance -- in the pew and in the choir.  We can only do what we are challenged to do.  Stretch the boundaries!!!  But do so in the pursuit of that which has some theological and musical integrity and not because it is trendy, faddish, or cool.  You might just be surprised!!!
Posted by Pastor Peters at 6:00 AM

One of the most difficult things I am learning as a Lutheran convert are the wonderful hymns. Baptists have a few good hymns (usually older, often borrowed from the Presbyterians or Anglicans). The hymnody of the Lutheran church is magnificent. The words are (for the most part) a lesson in sound doctrine. The melodies have been a little more difficult for me (alto), as most are borne on a very diffferent blood than most American/Revivalist melodies. I love the words and music. They are not easy, they are challenging. We love sports challenges, but seem to disdain mental ones. Music is perhaps the best aid to memory. This is one of the reasons I simply do not understand people's reluctance to sung Liturgy. If the Liturgy is important (and it IS), what better way to memorize our part in it? Also, since it takes more time to chant/sing the words, I get to hear clearly every word of the parts that belong to the presider. No mumbled prayer with an, "In Jesus' Name..." tacked on at the end; instead I hear wonderful words, many penned centuries ago from Christians in the stream of time that flows from Christ's death, burial, and resurrection! Allelujah!

The Church Growth crowd loves to say, "Get out of your comfort zone!" Somehow or another, that doesn't extend to learning unfamiliar Lutheran chorales.

I'd be more worried about the hymns that are contained in the LSB that are not Lutheran. I can understand including hymns from the traditional church up to the Reformation, but why would the hymns of the Wesleys or modern "feel-good" hymns even be permitted to grace the pages? I never understood that.

Lutheranism in the English speaking world is an alien presence with almost no history. If there are English hymns which are doctrinally sound there is no reason not to use them.