We are the products of our rites. . . 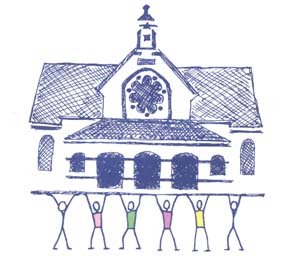 It was Churchill who famously said that we shape our buildings and then they shape us.  I know I have quoted it here before.  But it is a truth that applies equally to our liturgical rites.  We shape them and then they shape us, or, more accurately, our children and their children.  Certainly Rome is awaking to the fact that the changes made post-Vatican II have significantly impacted much more than the worship life of their church but also its doctrine and piety.  If we Lutherans are honest, we would agree that the liturgical changes of the 1970s have had a profound impact upon us and even more upon our children.

My own parish has a kind of lost generation -- some of the boomers who bought into a casual church in which the music mirrored the sounds of the radio and the participants in the rites were accorded their roles by estimations of equality and egalitarian ideals.  They have followed their ideals to their logical conclusions and now their attitudes toward the faith itself has become somewhat casual and distant.  They go when they feel like it and do not feel like they are missing much when they are absent.

Some of their children and grandchildren gave up on the church at the same time as their parents and grandparents and remain largely unchurched or underchurched.  They have come to define nearly everything by personal preference and judge everything according to its entertainment value.  On the other hand, some of their children and many of their grandchildren have rebelled against their casual attitudes toward church and worship.  They have sniffed around for authority and legitimacy in transcendence rather than relevance and the old patterns of liturgy have called them home to a place they never knew existed before.  In Rome and in Lutheranism younger folks have shown a definite affection for liturgical worship and doctrinal preaching.

Our renewed rites with their focus on the catholic ceremonies we once knew and the doctrinal certitude we once espoused have fostered a faith that, God willing, will raise up a new generation without the blinders of preference and relevance to betray them the way my own generation was.  We are the products of our rites.  Just as we grew apart from the transcendance of the Holy One and the worship shaped by awe, reverence, and transcendence, so we will grow again into a renewed understanding of the Mighty God who delivered up His only Son into our flesh to redeem us from sin's curse and its despecible child of death.  We are the products of our rites.  That very same principle which worked against us and the Lord's purpose will now become the rootes and foundation of a new generation of people who want the thing signed more than the mere sign, who insist upon the full counsel of God's Word, who believe that words mean something and that doctrine does not change or transform to fit cultural norms.  Yes, we were the products of our rites and we shall be still.

I am personally encouraged by young men coming from our seminaries expecting to be Lutheran pastors and expecting their parishes to be Lutheran in doctrine and practice.  I am hopeful that just as we were once led by a spirit at odds with our catholic identity, we will be led anew by the a spirit which is insistent upon the Word yesterday, today, and forever the same the worship which proceeds from this conviction.  That is why we must work to support those who will lead us into a new generation of faithfulness.  Sure, they will make mistakes and people will rebel against their leadership and some will raise untrue suspicion against their commitment to be fully Lutheran and confessional.  But they will prevail if we who get it support them and insist that this is who we are, who we have always been, and who we must be if we have a future.  We are the products of our rites -- both for ill and for good.  A little child shall lead them and this child begins our journey on Sunday morning.  Come, let us follow...
Posted by Pastor Peters at 6:00 AM

I hope you are correct, and pray forthe best for these seminarians. Do also pray that our DP's repent of their spinelessness and support said seminarians when they start catching flak from the ruling Haugenistas and other public nuisances ruling our congregations.

These faithful new pastors will largely have to stand on their own, as most District Presidents in the LCMS, especially in salt water districts and several others are not supportive of the ideals you state so well. We need a renewal of leadership in the LCMS districts badly.

"On the night of 10th May, 1941, with one of the last bombs of the last serious raid, our House of Commons was destroyed by the violence of the enemy, and we have now to consider whether we should build it up again, and how, and when. We shape our buildings and afterwards our buildings shape us. Having dwelt and served for more than 40 years in the late Chamber, and having derived fiery great pleasure and advantage therefrom, I, naturally, would like to see it restored in all essentials to its old form, convenience and dignity. I believe that will be the opinion of the great majority of its Members. It is certainly the opinion of His Majesty's Government and we propose to support this resolution to the best of our ability.

"There are two main characteristics of the House of Commons which will command the approval and the support of reflective and experienced Members. They will, I have no doubt, sound odd to foreign ears. The first is that its shape should be oblong and not semi-circular. Here is a very potent factor in our political life. The semi-circular assembly, which appeals to political theorists, enables every individual or every group to move round the centre, adopting various shades of pink according as the weather changes. I am a convinced supporter of the party system in preference to the group system. I have sewn many earnest and ardent Parliaments destroyed by the group system. The party system is much favoured by the oblong form of Chamber. It is easy for an individual to move through those insensible gradations from Left to Right but the act of crossing the Floor is one which requires serious consideration. I am well informed on this matter, for I have accomplished that difficult process, not only once but twice. Logic is a poor guide compared with custom. Logic which has created in so many countries semi-circular assemblies which have buildings which give to every Member, not only a seat to sit in but often a desk to write at, with a lid to bang, has proved fatal to Parliamentary Government as we know it here in its home and in the land of its birth.

"The second characteristic of a Chamber formed on the lines of the House of Commons is that it should not be big enough to contain all its Members at once without over-crowding and that there should be no question of every Member having a separate seat reserved for him. The reason for this has long been a puzzle to uninstructed outsiders and has frequently excited the curiosity and even the criticism of new Members. Yet it is not so difficult to understand if you look at it from a practical point of view. If the House is big enough to contain all its Members, nine-tenths of its Debates will be conducted in the depressing atmosphere of an almost empty or half-empty Chamber. The essence of good House of Commons speaking is the conversational style, the facility for quick, informal interruptions and interchanges. Harangues from a rostrum would be a bad substitute for the conversational style in which so much of our business is done. But the conversational style requires a fairly small space, and there should be on great occasions a sense of crowd and urgency. There should be a sense of the importance of much that is said and a sense that great matters are being decided, there and then, by the House."

" They have sniffed around for authority and legitimacy in transcendence rather than relevance and the old patterns of liturgy have called them home to a place they never knew existed before. " So, these younger people have their preference, and it is the liturgical style.