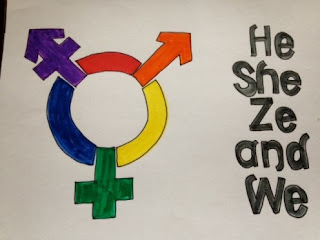 Apparently we are still replaying the old rebellion game first begun in Eden.  God created them male and female and this has proven insufficient for the modern world of personal preference.  Lets just add a few to the categories of God's creation -- for now -- or lets just do away with God's ideas entirely and let every person decide for themselves which gender they are and how the self-identify.

Harvard University's largest academic division is allowing students to register for the new academic year as male, female, or transgender and choose which gendered or genderless pronouns they prefer, school officials said Thursday.

The Ivy League school's arts and science college, which enrolls about half of Harvard's 21,000 students, will give them the chance to indicate whether they prefer to use the traditional pronouns "he" and "she" or alternatives including "ze," "hir," or variants of "they."

You can buy the clothes you want, where you want (provided you can afford them and they fit you -- although the latter is flexible).  We all choose what kind of house to call home (or no house at all) and we purchase our own fashion statement for the furnishings of that domicile.  We do so many things according to taste or personal preference -- but not enough of them!  Nope, Harvard has decided that gender is an evolving concept and that it is a flexible statement for the person to identity and change as ze desires.

How strange it is that this would become the chief occupation of youth!  Oh, well, what significance have the grave problems of society in general when I am not sure at this moment who I feel like or how I want to be addressed???  Perhaps the most damning of the fallouts of original sin is the fickle character of our whims and wills.  We are not sure about anything except that the way things are is not what we desire.  And everyone did what was right in his (her, zer, whatever) eyes.

It makes me wonder if Harvard has been holding administrative meetings in Colorado (aided by recreational encouragements an oddity legal only in Colorado!).  There is no sense common to us anymore and there is no commonness worth sacrificing any nuance of personal desire, preference, or choice to preserve.  Nope, we have found Adam and Even insufficient in their rebellion against the Creator and His order so now we must continue our foray into the realm of creator and refine what God began (because He just did not get it right for us).  The only part of simil justus et peccator that I struggle with is the justus part.  The peccator seems painfully obvious.  Jesus was surely correct -- will there be faith on earth when the Son of Man returns in His glory???
Posted by Pastor Peters at 6:00 AM

And parents of prospective college students may chose to refer to Harvard as a university, tuition blackhole, or educational cesspool.

Time for your weekly bashing of LGBT people! Don't you get tired of it? This is quite a preoccupation of the LCMS.
-- Christopher

And time for Christoropher's weekly reiteration of the Liberal Lie: "All beliefs are to be tolerated, except those that are not tolerant."