The Lord sends; we pray 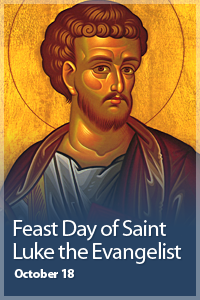 Today is the Festival of St. Luke, and therefore, it’s only appropriate that I begin with some basic information about the man we commemorate. According to tradition, Luke was a physician and an artist. We know from Scripture that he was a travel companion of St. Paul. Of course, Luke is most widely known as an evangelist, a proclaimer of God’s Good News through the gospel that bears his name.

Luke’s Gospel is one of the three Synoptic Gospels, the other two being Matthew and Mark. These gospels are called synoptics because they record the life, death, and resurrection of Jesus in a similar way. All three retell some of the same events in Jesus’ life, but there are some differences. One of these is the sending out of the 72. Only Luke records this event.

I. After Jesus taught about the cost of following Him, He sent 72 men out ahead of Him in pairs to each of the towns that He would stop at as He made His way to Jerusalem for the last time. He sent them out with several instructions. They weren’t supposed to take with them a money bag, a knapsack, or an extra pair of sandals. They weren’t supposed to stop on the road and great people. These instructions showed the urgency that these men were to perform their task with. They weren’t supposed to worry about the things of this world, the things that distract us. The message they were to speak was too important to stop and greet people, it was too important to get side tracked with material gain.

This message was the message of God’s peace and the coming of His kingdom. When they came to a house, they were to say, “Peace be to this house!” (Lk 10:5). They were told to heal the sick and say, “The kingdom of God has come near to you” (Lk 10:9). These words are nothing else but the declaration of God’s Gospel, the Good News of His salvation. The kingdom of God, His rule and reign, had come to the people in Christ Jesus, and these 72 disciples were announcing His coming. They were proclaiming God’s salvation in Christ.

The work and message of the 72 wasn’t anything new. God has always appointed and sent men to announce His Words and salvation. In the Old Testament, He sent prophets to call His people back in repentance and to herald His forgiveness and mercy. This is exactly what the prophet Isaiah proclaimed. The healing of the blind, deaf, lame, and mute; the renewal of the land is the pronouncement of God’s salvation in Christ.

Likewise, Jesus’ apostles spoke these same words. Jesus sent His disciples out to the nations to baptize and teach them all that He said. St. Paul only proclaimed Christ and Him crucified on his travels and in his epistles.

When Jesus sent out the 72, He warned them that their task would not be an easy one. They were being sent “out as lambs in the midst of wolves” (Lk 10:3). There would be times when these messengers would be rejected. Their peace would be returned, unwanted. People would hear of the coming of God’s kingdom and not want anything to do with it. They would respond in anger and violence. This rejection and violence also was nothing new for God’s messengers. His prophets were persecuted and killed, and Jesus’ apostles suffered oppression and mistreatment. Paul was imprisoned and suffered numerous times for the Gospel.

But we also need God’s pastors to proclaim His Gospel to us. We need to hear His absolution when we repent and confess our sin. We need to receive the new life in the waters of Baptism that are joined to God’s promise of salvation. We need to be fed with Christ’s body and blood which were given and shed on the cross for us for the forgiveness of sins. We need to hear and receive God’s peace, graciously given to us.

We need to hear this message of God so much that He not only sends His pastors, but He also sends His saints, and this includes you. He sends you, His forgiven child, to share His peace and kingdom to others in your vocation, in words and deeds. Parents: you do this when you bring your children up in the faith; bringing them to the waters of Baptism; bringing them to church and reading scripture to them at home; when you live out God’s forgiveness in your lives, forgiving your children and forgiving your spouses. Children: you do this when you forgive others, your friends and your parents; when you share your faith, when invite your friends to church. You do this when you tell others about Jesus and how He died for them to take away their sins. And all of us together, as God’s saints, do this through the support of the church; when we bring our tithes and offerings, when we speak about our faith with family, friends, and neighbors, and when we join and help different organizations in the church, like LWML, as they help in different ways to spread God’s Gospel.

Of course, this isn’t always easy. Just as it was difficult for God’s prophets, the 72, and Jesus’ apostles, it is still difficult today. God’s messengers and saints are still being rejected. We’re still sent out as lambs in the midst wolves. The Christian message of salvation in Christ is still attacked. People lash out and respond in violence. It seems like every day a new story is reported about the persecution and killing of Christians throughout the world, sometimes in very gruesome ways. Because of this persecution, we often avoid sharing the saving message of Christ to others. We don’t want to suffer, so we cower and keep silent.

III. Therefore we must pray. We must pray for the Lord to continue sending His laborers. We must pray for the help of the Holy Spirit to strengthen our faith so that we can share it with others. We can’t reap the harvest on our own. We can’t make people believe, we can’t put faith in Christ in people’s hearts. Only God can do this. And He does it through the work of His laborers. God promises to create saving faith in people through the proclamation of His Word. He has done this through His prophets and apostles. He has done this through His evangelists like Luke. He does this through pastors and through you His saints.

THE LORD SENDS OUT HIS LABORERS AND WE PRAY that God will continue to send His laborers, so that we, and others, will continually hear the saving message of His peace and kingdom in Christ. In Jesus’ name...Amen.
Posted by Pastor Peters at 6:00 AM