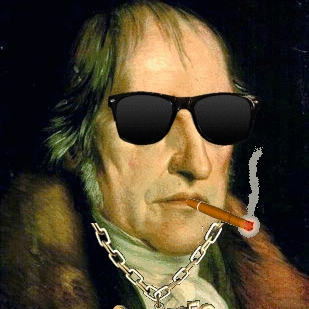 I am amazed at how the up and coming voices in contemporary theology from my youth are no longer spoken of but that does not mean their influence has not been influenced.  Jurgen Moltmann (who even talks about him anymore) took Hegel's philosophy and put into a Christian system.  In this response to the lofty distance of a transcendent God, God's existence is involved in human history -- an unfolding participation.  God is Spirit (Geist) who wears the suffering of His people while at the same time leading history to its full progression.  Revelation is therefore not complete but ongoing.

In Hegel and in Moltmann, God suffers with the sin and suffering of His creation and is changed by this suffering.  God evolves as does history itself, pouring out His love and mercy in response to and because He suffers with His creatures.  Thus the Hegelian version of the Gospel preaches a God who cannot actually save but whose salvation is that He suffers with His people.  This is a God who is found in our tears, who does not wipe away every tear because it is in the act of suffering that we experience Him and He is God.  Hegel insisted “God is not God without the world.”  Even more than this, God requires our sin and suffering for Him to be God.

Given the fact that the Enlightenment seemed to leave God so distant and transcendent to the point where it was questionable that God could ever be known or experienced.  So Hegel made God close to us -- as close as our sufferings.  To save us God takes death into His own nation and in our suffering and death we meet the eternal and the divine in history.  Salvation is not a single act but a process.  For Hegel and his followers, the way we know God is to project upon Him our sin and suffering.  God becomes the very unfolding of history itself;  God enters history and we enter into His divine line through our authentic existence in time.  Hegel postulates a God who is the Absolute but who is known relatively.  Faith becomes the search for greater self-understanding looked at through the lens of his divine love as it unfolds in human history.

Have I put you to sleep yet?  My point is not to bring us what probably is best forgotten (both Moltmann and Hegel as well as others who have headed down that road).  My point is that much of what passes for Christianity is unmistakably bound up in the Hegelian construct of a God who is changeable and who changes for and because of us -- as opposed to a God who changes us.  So history becomes important since nothing is really immutable but all things are becoming.  God's Word is not objective truth but an unfolding truth in which today is always fuller than yesterday and not as full as tomorrow.  The Spirit is at work in history and we are progressing with God.  In this perspective, nothing is set and everything is up for redefinition.  There is no conflict here since God is changing and changing in response to and for the benefit of you and me.

God is doing a new thing.  How many times haven't we heard people say this?  God is doing a new thing but it does not matter if this new thing appears to contradict the old thing He did.  No, God is always changing and mostly in response to our changes.  This is ultimately the worst form of heresy because it makes the Redeemer into the one who is redeemed.  God needs me and my sin and my suffering or He cannot be God.  God's work is to incorporate me into Himself but it ends up being more so that God is transformed and not me.

History becomes the prime revelation of God -- a God who is always in movement, changing, and transforming.  So Hegel works well with those who push for the ordination of women, the redefinition of marriage and family, the adoption of the latest and greatest expression of sexual gender or behavior, and the shifting of the rules (the Word) to fit the changing landscape of our lives.  One listens in vain to hear of the sinner who must be redeemed, of the lost to be found and restored, or of sin and death as enemies, indeed a prison from which we must be set free.

In our world in search of a truth to fit the moment, in its glorification of the victim, and in its quest for a diversity in which everyone and everything is right in their own time, Hegel seems to be the right voice for philosophy and the Hegelian theologians the right voices for Christianity, at least as it is now.  In the end, however, we don't even need Hegel to figure this out.  It is exactly what went wrong in Eden.

Well said, and a great charaterization of open theism.

Thank you for your insightful analysis. Well-done.

Amen. Fascism is alive and well, in the Church, unfortunately.