Vatican Monsignor Comes Out. . . Is Booted Out 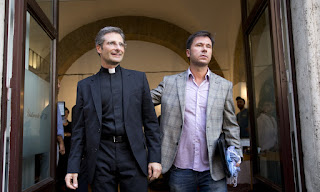 "I want the Church and my community to know who I am: a gay priest who is happy, and proud of his identity. I’m prepared to pay the consequences, but it’s time the Church opened its eyes, and realised that offering gay believers total abstinence from a life of love is inhuman.”  So said Monsignor Krzysztof Charamsa, a 43 year old Pole who has lived in Rome for 17 years.  After his coming out, he was fired by the Vatican from his posts. But he was not just a priest, he has been a member of the very prominent Congregation for the Doctrine of the Faith since 2003, assistant secretary of the International Theological Commission of the Vatican, and taught theology at the Pontifical Gregorian University and the Pontifical Athenaeum Regina Apostolorum in Rome.

I think it can be safely said that never before has a priest with such a high-profile role in the Vatican come out in such a public manner. The impact of this notable priest's coming out story will be known as the days unfold.  It is clearly more than a coming out but a direct challenge to the doctrine and faith of the Roman Catholic Church.  In fact, he is pictured in public with his boyfriend -- he is not only gay but actively pursuing the gay lifestyle.  I am sure that this was no secret in Rome.

When confronted with the words of the Catholic Catechism, the priest responded: “The Bible says nothing on the subject of homosexuality. It instead speaks of acts that I would call “homogenital”. Even heterosexual people may perform such acts, as happens in many prisons, but in that case they are acting against their nature and therefore committing a sin. When a gay person engages in those same acts, they are instead expressing their nature. The biblical sodomite has nothing to do with two gays that love each other in modern-day Italy and want to marry. I am unable to find a single passage, even in St Paul, that may be seen as referring to homosexual persons asking to be respected as such, since at the time the concept was unknown.”

Clearly the issue has not been resolved by the somewhat muddled process and outcome at the recent
Synod or the meeting prior.  In fact, it may have rejuvenated those groups who are pushing for a change in moral teaching and a departure from the historic Christian perspective on same sex relationships.  Unless Pope Francis takes the public action of demoting or removing those who pushed for this so publicly at the two meetings of bishops and deals firmly and decisively with this individual and others like him, Rome will find itself in an even greater muddle.  Firing him is a start but his challenge must be publicly and strongly answered and his priestly faculties removed.  Since Lutherans get a cold every time Rome coughs, there is not a little interest from the Lutheran side in this as well.

“The Bible says nothing on the subject of homosexuality. It instead speaks of acts that I would call “homogenital”. Even heterosexual people may perform such acts, as happens in many prisons, but in that case they are acting against their nature and therefore committing a sin. When a gay person engages in those same acts, they are instead expressing their nature. The biblical sodomite has nothing to do with two gays that love each other in modern-day Italy and want to marry. I am unable to find a single passage, even in St Paul, that may be seen as referring to homosexual persons asking to be respected as such, since at the time the concept was unknown.”

The problem here is equivocation: if this poofter-priest actually read Scripture, he would see absolutely no reference to motivation or feelings in the condemnations of homosexual behavior in those passages he questions. Wehn one pile son the passages regarding the creation order and mandate, prohibition of transvestitism, etc, his case sinks like lead. Finally, his observation about acting according to one's nature could onhly come from one who denies the noetic effects of the Fall; ie his homosexual nature is evidence for total depravity rather than one given by God; his argument really comes down to an attack on God.

Kirk, there are none so blind as those who will not see.

Janis, let's pray that that doesn't describe the LCMS.

Everyone has a free will and "Monsignor Krzysztof Charamsa" decided he wants flesh now and the fires of hell eternally.

He said he checked out the Bible and there was nothing that said he couldn't enjoy his boyfriend. Really he must be blind. Matthew 15:14 says "And if the blind lead the blind both will fall into the pit." If you are gay do not follow this Monsignor of Satan.

Check out Romans1:26-27..."and similarly,the males also, abandoning the natural use of females, have burned their desires for one another: males doing with males what is disgraceful, and receiving within themselves the recompense that necessarily results from their error. In addition look up: 1Cor.6:9-10, 1Tim.1:8-10, Jude 7, Leviticus 18:22 AND Leviticus 20-13. For this monsignor not to find any of this in the Bible I would suggest he is a liar. Therefore, he is a Child of the Father of Lies.