My students are know-nothings. . . 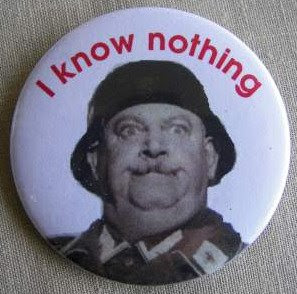 In what became almost a slam to the Know Nothing party, Patrick Deneen of Notre Dame University has written of the hegemony of the present and of preferences among those attending college today.  You can read it all here.  You can also read another similar perspective by Myron Magnet here.  Finally, there is one more voice of complaint; read it here.  The complaints are about those who seek not information nor training, least of all how to think, but mere affirmations of their own prejudice, self-centered world views, and whims.  A educational ship that is adrift on a sea of the moment, without anchor in the past and without a course toward a future.

I offer this because it is a problem not merely for the university but for the parents who pay the bill, for the employers who will hire them, and for the society that will depend upon them when the challenges of the world and the issues of the day will be laid in their lap.  It is surely not an indictment of every college student but it is symptomatic of the failures not only of the students but of those who have allowed them to live in such isolation from reality.  Words worth your attention!

Christians are wrestling with a faith adrift from Scripture and tradition, morality is adrift from its anchor in God's creative will and purpose, and education is adrift from its once noble purpose of serious thought, reflective upon the past and directed toward a noble future.


My students are know-nothings.  They are exceedingly nice, pleasant, trustworthy, mostly honest, well-intentioned, and utterly decent.  But their minds are largely empty, devoid of any substantial knowledge that might be the fruits of an education in an inheritance and a gift of a previous generation.  They are the culmination of western civilization, a civilization that has forgotten its origins and aims, and as a result, has achieved near-perfect indifference about itself….


We have fallen into the bad and unquestioned habit of thinking that our educational system is broken, but it is working on all cylinders.  What our educational system aims to produce is cultural amnesia, a wholesale lack of curiosity, historyless free agents, and educational goals composed of contentless processes and unexamined buzz-words like “critical thinking,” “diversity,” “ways of knowing,” “social justice,” and “cultural competence.”  Our students are the achievement of a systemic commitment to producing individuals without a past for whom the future is a foreign country, cultureless ciphers who can live anywhere and perform any kind of work without inquiring about its purposes or ends, perfected tools for an economic system that prizes “flexibility” (geographic, interpersonal, ethical).  In such a world, possessing a culture, a history, an inheritance, a commitment to a place and particular people, specific forms of gratitude and indebtedness (rather than a generalized and deracinated commitment to “social justice”), a strong set of ethical and moral norms that assert definite limits to what one ought and ought not to do (aside from being “judgmental”) are hindrances and handicaps.  Regardless of major or course of study, the main object of modern education is to sand off remnants of any cultural or historical specificity and identity that might still stick to our students, to make them perfect company men and women for a modern polity and economy that penalizes deep commitments.  Efforts first to foster appreciation for “multi-culturalism” signaled a dedication to eviscerate any particular cultural inheritance, while the current fad of “diversity” signals thoroughgoing commitment to de-cultured and relentless homogenization.

Above all, the one overarching lesson that students receive is to understand themselves to be radically autonomous selves within a comprehensive global system with a common commitment to mutual indifference.  Our commitment to mutual indifference is what binds us together as a global people.  Any remnant of a common culture would interfere with this prime directive:  a common culture would imply that we share something thicker, an inheritance that we did not create, and a set of commitments that imply limits and particular devotions.  Ancient philosophy and practice heaped praise upon res publica – a devotion to public things, things we share together.  We have instead created the world’s first res idiotica – from the Greek word idiotes, meaning “private individual.”  Our education system excels at producing solipsistic, self-contained selves whose only public commitment is an absence of commitment to a public, a common culture, a shared history.  They are perfectly hollowed vessels, receptive and obedient, without any real obligations or devotions.  They have been taught to care passionately about their indifference, and to denounce the presence of actual diversity that threatens the security of their cocoon. They are living in a perpetual Truman Show, a world constructed yesterday that is nothing more than a set for their solipsism, without any history or trajectory.

As a high school English and Russian teacher, I see a wide variety of student behaviors and levels of real-world and cultural awareness. I hear troubling echoes of their belief system (whether motivated by upbringing or peer-pressure). These are young folks who cannot help but by into a world which promotes cultural righteousness (i.e. which golden calf to choose in November).

Students today fall into what Christian Smith coins as moralistic therapeutic deism. Ready for the next charismatic leader who can convince them his/her way is right and best. We are ripe for a new wave of something tantamount to fascism. Today's students are ready to follow a charismatic messiah with the morals, direction and knowledge convincing enough to be "true" to them. The old saw about repeating history fits.

How can the libs control people without keeping them down, dumb, and dependent; and what better means of control is there than government schools? Christians, pay heed.