The Living Lutheran. . . born of the dead The Lutheran magazine. . . 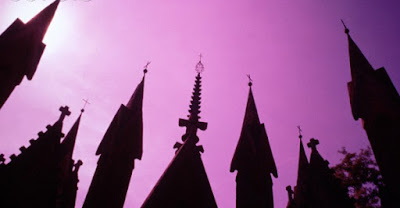 I opened my mail and found a new magazine -- well, it is really not new but the name is.  The Living Lutheran is the new flagship publication of the ELCA.  The Lutheran had been in decline for a while (not unlike many, if not most, denominational magazines).  That said, however, The Lutheran was a strange mix of official periodical striving to maintain some editorial objectivity and distance.  I watched as this translated more and more into advocacy for the lefter side of the ELCA equation.  Most folks did.  The stories seemed to feature GLBT folks in greater proportion than one would find them in the pews of the ELCA congregations.  They also advocated diversity to the extreme -- I had already mentioned the kind of welcome one article fostered in which sensitivity to other religions meant refraining from anything anyone might find objectionable.

Living Lutheran will never be accused of upholding any confessional doctrinal integrity (except perhaps their loyalty to diversity, feminism, and the GLBT agenda).  The first issue did not disappoint me.  There were articles on water renewing the earth and the church, autism friendly activity bags, a Lutheran/Methodist partnership, eco-evangelism, healthier living, etc...  Peter Marty explained that the greatest achievement of Easter was not freedom from death but freedom from our fears.  It seems that sin is an also ran among the problems of mankind.  I found that the ELCA bishops are discussing the future of their church body by trying to assess where they are now and what God has in store for them. I read of the sacredness of creation (of saving butterflies and Flint, MI).  I read of a smiling face on worker priests (now called bi-vocational clergy).  But the page I spent the most time on is the list of deaths where I tend to see the names of pastors I have known or those who served parishes with which I have had a passing familiarity.  All in all it does not speak well of the living part of the Living Lutheran now does it.

Now this might appear that I am down on denominational magazines.  I am not.  I have consistently championed The Lutheran Witness in my own parish and on this blog.  What commends a good denominational journal is less the flash than the substance.  Yes, good graphics and a winsome appearance helps but what people look for and what builds a great journal is the meat and potatoes of what we believe, why we believe it, how we practice this faith, and what challenges lie before us in all of those areas.  The journals that are dying generally have forgotten that they are vehicles for the faith and for the church.  Instead of advocating what Scripture says, what they confess, what the creeds say, etc... too many journals have taken to questioning the faith, disputing what has been believed, taught, and confessed, and advocating largely for liberal social positions.

The church and Christianity have enough skeptics outside the faith.  We do not need to provide internal agencies to raise the same kind of doubts about what the Bible says, what the creeds confess, and what has always been believed, confessed, and taught through the ages.  Yes, the church press needs to be objective and its job is not to gloss over wrongs or lie on behalf of the institution but the real crying need is for journals who advocate FOR the faith and not against it.  Our people are inundated with material from sources unfriendly to the faith or who offer a novel approach to Christianity inconsistent with creed and confession.  Our people listen to pop Christian music, popular radio and TV preachers, and read internet theology from questionable sources.  They don't need to find this stuff in a church sponsored monthly magazine.  They need a source that draws them back to Scripture and catechism, hymnal and prayerbook.  Do that well and you have not only a top notch denominational journal but a real asset for folks in the pew.   I am happy that The Lutheran Witness does this well.  Living Lutheran, well, the best I can say is that they were not off to a great start.
Posted by Pastor Peters at 6:00 AM

There was a time in the 80's where The Lutheran Witness missed the mark on conveying doctrine, but since then the staff at LW has done a very good job at Lutheran theology. This is especially true in the last couple of years in confronting questions the Millenials are asking. I would put up the LW against any other denominational periodical.

"The Living Lutheran is the new flagship publication of the ELCA."

Like its XXXA predecessor, the Living Lufauxran cannot compete against the softness of Charmin.

- Much lower visibility compared to Evangelicals
- Poor catechesis of its people
- Problems with reaching out to non-WASP folks
- Most important - Too bookish and doctrinal for this anti-intellectual and feelings-oriented times
- Also most important - No more social pressure to stay in same church, it's all individualism now

1. Participate in unionistic worship services, revivals, and other unionistic religious work,
2. Accept the theology and practices of the charismatic movement,
3. "Sheep-steal," and
4. Identify with American Evangelical politics and political organizations.

In a section, "Demythologizing the Mission: The Brutal Facts of the LCMS Forty-Year Decline," in his President's Report (2016 LCMS Convention Workbook, pp. 2-3), President Harrison stated:

"Folks, the LCMS has been declining for some forty years. No LCMS district has shown any increase in the number of the baptized in nearly twenty years. A couple of years back, I requested our internal Rosters and Statistics people do a thorough study on the performance of each district over the past forty years, with a focus especially upon the last decade. While districts vary in the percentage of decline, the trend line for all of them is the same. It’s even the case in the two largest districts (Texas and Michigan), which have planted the most congregations over the past forty years. We noted that the decline of the two Iowa districts was identical from 2002 to 2012. This was intriguing because Iowa East tends to be quite conservative and Iowa West less so. This and other factors has led me to believe that our decline could hardly be pegged to closed Communion or worship practices, much less our doctrine or our biblical positions on social issues."

After discussing the results of two more studies, the President’s Report continues:

"After the third study was done, I asked for just a little more information. I asked for a county-by-county report on the birth rates for each district area of the LCMS. Guess what? The district/state with the highest birth rate in the past ten years (South Dakota), happened to be the best performing district of the LCMS (only a 4 percent decline from 2002–2012). New Jersey had the lowest birth rate over the past decade, and the district accordingly showed the greatest losses over ten years (33 percent). What’s more, the performance of each district lines up almost exactly with the birth rate of each area.….

"The brutal fact is, we could elevate our evangelism performance to that of the Mormons, and we would still be looking at numerical decline in 33 of our 35 districts. Sober facts. These are not excuses. These are facts."