Who laid the egg that Luther hatched. . . 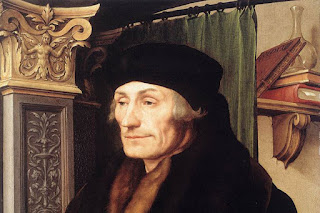 Five hundred years ago this year, in February and March of 1516, a Swiss-German printer in Basel named Johann Froben published a volume of some 1,000 pages titled Novum Instrumentum Omne, “the whole New Testament.” This was the first officially published edition of the Greek New Testament, and it was the work of Desiderius Erasmus of Rotterdam. Next year, the scholarly world will commemorate the 500th anniversary of the Protestant Reformation, with much attention devoted to Martin Luther and the hammer blows heard in Wittenberg on October 31, 1517. Before then, however, it is good to glimpse Erasmus in the annus mirabilis of 1516, the year before the storm broke loose.

With those words Dr. Timothy George began his well written introduction to man about whom it was once claimed he laid the egg that Luther hatched.  It is a good introduction, sympathetic and yet honest, to a man whose importance can hardly be over estimated and yet who has become a largely forgotten figure except within the halls of the university and the conversations of intellectuals.  Yet this is probably the way it was supposed to be.  Erasmus demurred over taking sides in the Reformation, was more at home among books than people, and spent his nights and days dreaming over an intellectual world of learned people in deep discussion of ideas.  Look around you.  We have not had suffered an abundance of intellectuals and learned folk in deep discussion of ideas.  In fact, for all Erasmus' dreams, we find ourselves more where Luther was -- in the conflict of desire and virtue, the frustration over the difficulty with virtue, and the fear that either God is real or irrelevant.

If God is real, then too much of what we thought will have to rethought and our lives are oddly out of sync with the Creator and all His creative will.  If God is irrelevant, then what of religion and faith and the existence of anything greater than whim or want?  As Bainton put it, Luther entered the monastery (religious life as a whole, we might say) in pursuit of the good works that would save his soul.  Erasmus entered the monastery in pursuit of the good books that would satisfy his interest and curiosity.

Dr. George is exactly right about the profound impact of Erasmus' 1516 Greek New Testament and the subsequent refinements of his original edition.  He was smart enough to dedicate it to the Pope and that curried some favor for him but then Erasmus was never much for the dirty work of reforming the church -- no matter how sympathetic he might have been to some of Luther's points.  No, the impact of Luther is the man and the impact of Erasmus is the book, the edition of the Greek New Testament that opened the way to everything from Luther's vernacular edition of the Bible to the intellectual pursuit of the Bible as just another book.

At the very end, Erasmus’s final words were murmured not in the classical tongues he knew so well but rather in his native Dutch—just two words he must first have heard from his mother in Holland, “Lieuer Got,” he said, “O, Dear God.”  Contrast this with Luther's last scribbles, We are beggars...  It seems rather clear on this alone who got it and who was still looking for it.  Luther depended upon grace and when chest pains and death came near, his first and final question merged into a deference to the mercy of God in Christ.  On the other hand, Erasmus ended his life with the same thing I might say if somebody had the nerve to mix some 15 year old Glenlivet with a root beer.  O, dear God, indeed!

The world was changed by Luther.  Whether you are happy about this or not, you know it is true.  Erasmus had a hand in it all but when the moment came to step up to the plate and own his position, Erasmus was all too ready to play spectator.  That said, it would be foolish for us to remember Luther without some small curiosity about the fellow who gave Luther some of the raw material to turn the Scriptures into a book for everyman.
Posted by Pastor Peters at 6:00 AM