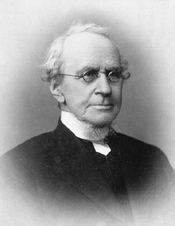 Writing in First Things, James Rogers turned our attention to Mercersburg theology -- a very small but significant strain of evangelical Calvinists named for the German Reformed Seminary at Mercersburg, Pennsylvania.  Some rather well known names were associated with this movement, people like John Williamson Nevins and Philip Schaff.  The movement was born of the rise of an individualism and the pietism of antebellum revivalist Protestantism which was seen by the Mercersburg theologians as a betrayal of true Calvinism.  It is a movement that will instinctively resonate with confessional Lutherans.

The Mercersburg theologians challenged what they called “the Bible plus private judgment.” According to its adherents, this individualism which put the reason of the individual above Scripture was the single most difficult enemy facing the church in its day.  In his Principles of Protestantism, Schaff wrote, “the most dangerous foe with which we are called to contend is not the Church of Rome but the sect plague in our own midst; not the single pope of the city of seven hills, but the numberless popes, German, English, and American – who would fain enslave Protestants once more to human authority, not as embodied in the church indeed, but as holding in the form of mere private judgment and private will.”

Rome insisted that the church came first and then the Christian.  What the Mercersburg theology exposed was the idea now almost uniform in evangelicalism and Protestantism, namely, that the individual comes first and creates the church. Though we certainly welcome any Calvinist who promotes a high view of the Eucharist, a view of the Church as a divine institution (as opposed to merely human), and a catholic, as opposed to sectarian, orientation, the reality is that Lutherans still find it necessary to insert another component -- the means of grace.

We might say that the means of grace (the Word and the Sacraments) create the Church and in this sense the Church gives birth to the individual Christian.  While some might quibble with this, the point of it is to draw attention away from the sacerdotal system in which the bishop or pope or even the priest is the Church.  The means of grace are the effective means and power through which the Holy Spirit is at work and certainly this presumes and implies the pastoral office but again as media and not hierarchical source.  The pastoral office is of divine establishment (not just the functions of that office as WELS would say) and it is an office which Christ gave to and so it belongs to the church (here I would suggest that congregation is too narrow a term) to fill that office and confer upon the pastor the authority to preach and administer the sacraments and by the call to place this man in a local place.

There is little room in Lutheranism for private judgment and for the role of reason as a magisterium above the Word of God.  Indeed the whole claim of the Augustana is that we introduced no new thing and tolerate no novelty but confess and practice that which is the true catholic tradition of doctrine and practice.  Part of that catholic doctrine and tradition is the affirmation of the Church as God's divine creation, as the office of the pastor as given by God to the Church and conferred by call and ordination upon the individual pastor, and from this exercise of the means of grace God works to call, gather, enlighten, and sanctify those whom He calls His own and to whom He imparts the full benefit and blessing of Christ's incarnation, righteous and obedient life, sacrificial death, and life imparting resurrection.  The means of grace are then the markers that show us where that Church is as well as the means by which we are incorporated into the Body of Christ, the Church, and sealed with the promise of everlasting life.
Posted by Pastor Peters at 6:00 AM

Given Nevin's writing on the Eucharist I'm a bit puzzled as to why you say that the means of grace need to be added to Nevin. I'm not sure about Nevin's take on absolution, which might be absent from his theology so there might be that.

Again, highfalutin verbiage w/nos substance: your acceptance of the FC was an act of private judgment, as would be perverting to Rome or its lookalkikes. There is no escaping private judgment, so the question is morethe how/what/why of it.