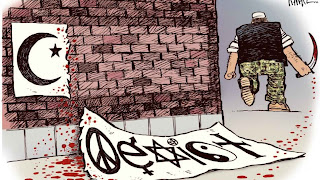 President Obama insists that to call terrorism a threat of Islamic extremism will do nothing to aid in the end of its violence.  In fact, he appears to go one step beyond and defend Islam against the charge that it is cause or trigger for acts of terrorism.  Instead he calls such things hate crimes against the GLBT community.  More than this, he and so many others describe the events of Orlando as national tragedy.  It is also unfortunate terminology.  A tragedy is when someone swims out to a drowning person and themselves drowns after saving the individual.  The events in Orlando were not tragic in this way but the deliberate act of violence perpetrated in the name of Islam, according to the man's own description of what he had done and his own words owning the crime.  His hate was not strictly upon the GLBT community but upon a whole nation in which freedom allows such a night club to exist.  His intent was not in taking out some gay people but in threatening a nation and a society in which such freedom tolerates what some abhor.

Since Pres. Bush first suggested it in the aftermath of 911 we have come to speak of Islam as if it were a good religion hijacked by extremists.  Some have pointed out that this extremism is at least tolerated by the Quran -- if not mandated by the Quran as the "extremists" claim.  While some try to equate the violence called for in the Quran with the Old Testament, it is not the same.  The violence prescribed by God in the Old Testament was limited to a particular time and a particular people. God gave no authority and there was no precedent for the continuance of this practice past God's command. The Quran actually prescribes violence and condones military jihad in the promotion of Islam. At no time in the Bible does God command His people to kill unbelievers in order to promotion of biblical faith. In its earliest years, there is no question that Islam was promoted by the sword. This stands in stark contrast to early Christianity where many early Christians were severely persecuted and martyred for the sake of Christ. As one philosopher put it, “Both Islam and Christianity were spread by the sword, but the swords were pointing in opposite directions!”  Islam has nothing to compare with the solemn warning of Jesus that those who live by the sword shall die by the sword.

However, my point here is to look at the difference with which Pres. Obama and most liberals view Islam in contrast to their view of Christianity.  By their refusal to old Islam accountable and to name the connection between the terrorists and their cause and justification for violence, they effectively give Islam a pass on the very command and requirement of violence in the Quran which cannot be mistaken.  On the other hand, the President and those liberals give no such deference to Christians who refuse to adopt the full social agenda of liberalism in changing the definition of marriage, advocating for the GLBT community and its full acceptance and incorporation into every aspect of American society and culture as a civil rights issue, and threatening the very existence of church schools and universities who do not abide by the same rules that must apply to secular or public institutions.  Here the Christians are demonized as homophobic and irrational even though these seek nothing  more than the full rights of the law guaranteeing no obstruction against religious liberty and practice.  The deference toward Islam, the willingness to grant equivalence between the Quran and the Old Testament, the refusal to inflame Islam by holding Islamic nations accountable for their treatment of Christians, and the sensitivity to religious images that offend Muslims all stand in stark contrast to an administration which belittles the Little Sisters of the Poor in their fight against Obamacare as no big deal.

My point is this.  Images matter.  Symbolism matters.  Words matter.  I fear for the future of orthodox Christianity when Islam is allowed to forego scrutiny of its own complicity in the violence of its adherents and Christianity is demonized.  I understand the political realities -- why Pres. Bush would suggest that Islam was in reality a peaceful religion and why Pres. Obama refuses to call ISIS Muslim terrorists.  I just do not get why in exchange orthodox Christianity must be demonized when it refuses to cooperate with the social justice and GLBT advocacy of liberalism.
Posted by Pastor Peters at 6:00 AM

Islamic Extremists Are the True Muslims

"Islamic extremists who carry out acts of terror are simply applying what their faith requires of them, according to Jesuit Father Henri Boulad, an Islamic scholar of the Egyptian Greek Melkite rite.

"In an interview with the National Catholic Register, Father Boulad said that 'Islam is an open-ended declaration of war against non-Muslims' and those who carry out violent jihad are true Muslims who are applying exactly what their creed demands.

"Those who fail to recognize the real threat posed by Islam are naïve and ignorant of history, he said, and unfortunately many in the Church fall into this category.

"The priest also stated his belief that the West is in an ethical and moral debacle, and its defense of Islam is a denial of truth.

“By defending at all costs Islam and seeking to exonerate it from the horrors committed every day in its name, one ends up betraying the truth,” he wrote.

"To back up his argument, Father Boulad enumerated a number of texts from the Koran that call on Muslims to employ violence in their conquest of the world for Allah."

Excerpted from "Jesuit Scholar: Islamic Extremists Are the True Muslims."