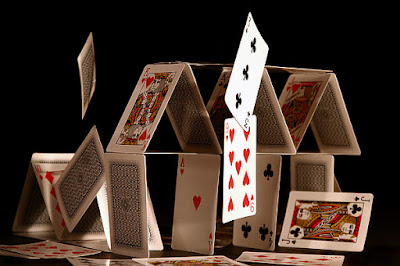 Liberalism tends to regard anything else as a weak and fragile construction of faith and piety in conflict with reason and common sense.  So the conservative is seen as someone who requires something extra to justify and bolster a faith that cannot stand on its own merits of reason and fact and science.  Think especially of those who ridicule the whole idea that God could or would create all things ex nihilo in six days or that Mary was truly Virgin Mother in fact as well as spirit or that the miracles of Jesus displaced the rules and laws of science.  How can it be?

How interesting then when one of those liberals with all the requisite credentials of academia and scholarship awakens to the fact that it is liberalism that is a house of cards, disconnected from the catholic history of Christendom, and wavering precariously on every whim of science and bowing before the altar of reason (and the idea of human progressive understanding)!


Thomas C. Oden is a is an American United Methodist theologian and religious author who was Henry Anson Buttz Professor of Theology and Ethics at Drew University from 1980 - 2004.  He is a prolific author who was once a prominent practitioner of the kind of liberal, modernist theology modern Methodism is known for.  Then something happened.  He began an exhaustive reading of the  Church Fathers and realized that his faith represented a clear disconnect with the faith they confessed.  Far from following the path of a typical liberal in discounting what he read, Oden did an about face.  He began to embrace orthodox, historical Christianity.  His story is told in A Change of Heart:  A Personal and Theological Memoir.

Oden's journey is remarkable since he began as an enthusiast of Bultmann and his demythologizing -- even writing a volume on Bultmann's ethics!  Though Oden hung out with Bultmann, Hans Gadamer, and Wolfhart Pannenberg, he was conversant with and an early proponent of a Christianizing of psychoanalysis and of group therapy within pastoral care.  Oden's popularity and influence was to suffer a severe blow when a challenge by Jewish historian Wil Herberg forced him to find out what Christianity was and is from its historical practice in early Christendom.  This became his own personal reformation and with it came a new path of life and a new career -- even a new set of friends!  He wrote of this in part in a book called After Modernity... What?

This journey reminds us that one cannot be Christian with any authenticity and believe and live in conflict with doctrine and practice of historic and orthodox Christianity.  While I would not yet call Oden a Lutheran, it is an illustrative look at the fragile construction of modern liberal theology, how this has captured the identity of most mainline denominations, and how it is possible to rediscover the faith from the writings of the Church Fathers.  Remember what Hermann Sasse said:
"It is always a sign of deep spiritual sickness when a church forgets its fathers."  (From Fathers of the Church, German original in Lutherische Blaetter 6:36 (May 10, 1954) pp58-69.)
Posted by Pastor Peters at 6:00 AM

The very moment after reading this posting my heart felt saddened for this man who took such an arduous path. If I could share anything with him it would be this hymn:

1 Holy Father! Thou hast taught me
We should live to Thee alone;
Year by year Thy hand hath brought me
On through dangers oft unknown.
When I wandered, Thou hast found me;
When I doubted, sent me light;
Still Thine arm has been around me,
All my paths were in Thy sight.
2 In the world will foes assail me,
Craftier, stronger far than I;
And the strife will never fail me,
Well I know, before I die.
Therefore, Lord, I come, believing
Thou canst give the power I need,
Through the prayer of faith receiving
Strength--the Spirit’s strength, indeed.
3 I would trust in Thy protecting,
Wholly rest upon Thine arm,
Follow wholly Thy directing,
Thou mine only guard from harm!
Keep me from our own undoing,
Help me turn to Thee when tried;
Still my footsteps, Father, viewing,
Keep me ever at Thy side.

And yet, this man remains a Methodist. How can anyone read the Church Fathers, I mean really read them and digest them and still remain a Protestant? It's like someone going through the five stages of grief and being perpetually locked into the first stage of denial. "Oh, those fathers were right, but I can't be anything but a Protestant so there must be something wrong with them."