The oldest, most complete Gospel book is in Ethiopia. . . 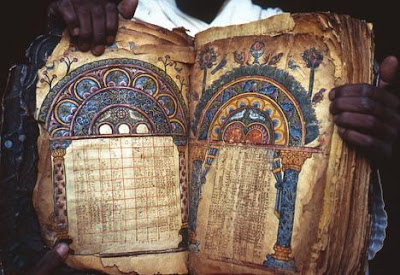 The oldest known bound, complete, and illustrated copy of the Gospels, the so-called Garima Gospels, has actually been kept safe and secure for centuries in a remote Ethiopian monastery.  The Garima Gospels are believed to be the earliest surviving example of book binding still attached to the original pages.

The volume is astonishingly beautiful.  They were named after a monk, Abba Garima, who arrived in Ethiopia in 494, from Constantinople. The story goes that he copied the Gospels in just one day when God delayed the sun from setting so the monk had time to finish his work. Whatever the legend, the truth of this incredible relic has lain upon the shelves of the Garima Monastery, near Adwa, in northern Ethiopia at 7,000 feet, ever since! 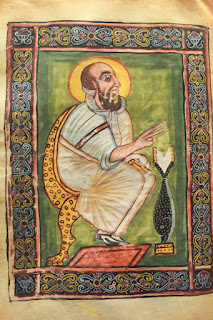 The books survival is most impressive when one considers that throughout its history, the country has suffered invasion after invasions and the monastery itself suffered a devastating fire in 1930 that destroyed the monastery’s chapel.  The carbon tests upon the paper in the book have given a date somewhere between 330 and 650, a date which fits with the time when Abba Garima arrived in Ethiopia.

Now this text is not a new discovery.  Travelers to the monastery mentioned this volume often -- even some well connected folks. But the date was wrong and most suspected this manuscript to have dated from the 11th century, at the earliest, and not as early as the mid-fourth century as carbon dating has posited.


So why does this matter?  Because the claim of the so-called scholars is often that the canon of the New Testament was not a given but the result of a conspiracy of folks from Constantine on to put a political and theological agenda above the truth.  These skeptics have suggested so often that the Jesus of history is far removed from the Christ of the Gospels to the point where many wonder if 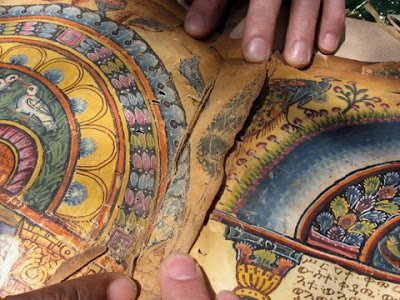 we can have any confidence in the New Testament and in the Gospels in particular.  Every time we discover something new, rather something old, the evidence points not in favor of the skeptic but in favor of the claims of the New Testament itself.  Since everyone is prone to talk about the things which support this conspiracy theory and the idea that we can never know much about the real Jesus, it is important for us to herald and acknowledge such things that point us with confidence to the truthfulness of the Biblical record.  Besides, the volume is simply beautiful to the eye!  This is its own testament to the value placed by the monks upon the written Word of Christ.
Posted by Pastor Peters at 6:00 AM

It is minor compared to the amazing preservation of the book, but the art would make ANY art student/artist drool. We'd rather fill the margins of our Bibles with our musings and 'inspired' notes today. The teaching value of illumination is inestimable. In addition, when the ancient reader's mind wandered from the text, there was beauty (not simply penned or printed words) there on the page to busy the mind till it came back to the text.

When I was a child, Bibles (even for adults) included pictures. I am thankful the Lutheran Study Bible has included the wonderful artwork it has, but as an artist/art student/crafts person, I long for color, and pages filled with gorgeous art, related to the subject of Scripture (Jesus). We'd probably have to use rolling suitcases to carry such a tome, but at least mass printing would make it affordable. If skilled artists' work filled the pages, I don't think mass production would cheapen the value?

There is ample evidence from 2nd century manuscripts and the early Church Fathers that the recorded life of Jesus is accurate. Constantine was in the 4th century. It is only people that try to fit their agenda with an alternative history that come up with the Roman state theory.