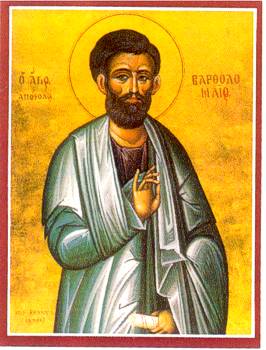 Sermon preached for St. Bartholomew, August 24, 2017, by the Rev. Seminarian Coleman Geraci (preaching on what was my 37th anniversary of installation as a pastor - Pastor Peters)

Grace to you and peace from God our Father and the Lord and Savior Jesus Christ. Amen.

What about the disciples? Who is the greatest from among them? Is it Peter? Seems like a worthy candidate, worthy enough that a part of the church would base its authority completely on him. Or what about John the beloved disciple? Maybe Bartholomew, or other wise known Nathanael? Sounds really good for today since it is his feast day. He is the disciple in whom there is no guile. Or Philip —first evangelist telling Nathanael about Jesus? Or, my personal vote, Thomas, who gives the greatest confession of Christ in Scripture: My Lord and My God?  In our text today, the disciples are trying to determine for themselves: Who is the greatest?

Just prior to our passage for today, Jesus has just instituted His supper with the disciples. He has just declared to them the promise of His body given into death for them; the new covenant in His blood poured out for them. Then He reveals the shocking news that one of the disciples will betray him. They begin to question one another, which of them could it be who was going to do this? But then, strangely the dispute changes. The disciples shift from determining who the worst one would be to disputing who should be regarded as the greatest among them. The disciples, as per usual, can’t see the forest for the trees.

The disciples miss Jesus in all of this. In their self centered mindset, they question who is the best and who is the worst amongst their ranks. They are worried about their position in line; about their own importance; about how much they mean to the ministry: Each making their claims, wanting to make their mark, wanting to be remembered as the greatest —not wanting to be the one who betrayed Jesus.

It’s easy for us to stand 2,000 years removed from this event and point fingers, but the reality is we have those same disputes. We inherently see ourselves as the center of the drama. We want our recognition —to be regarded as great. We want to know how great we are in our charity; how important we are to advancing the kingdom. We most certainly don’t want to be the ones who are regarded as betrayers of Jesus. But how often do we betray him? How often do neglect Jesus to justify our own desires? How often do we neglect to hear His Word and hold it sacred? How often do we neglect His supper that He gives to us? Neglect the community He has given to us? How often do we see those in that community as means to validate our own “greatness”?

In the midst of the disciples’ dispute, Jesus tells the disciples that they must become as servants. They must rid themselves of their own desires and ambitions and give themselves over to one another.  He tells them that they must become servants because He is among them as one who serves. Jesus demonstrates this service by going to onward from that supper to Calvary —to the Cross where He would give His body and blood for the life of the world. There He would become the greatest by being the servant to all. Three days later He would vindicated as the Greatest by His resurrection.

But Jesus does not leave them with only a commandment. Jesus gives more. He makes them a promise. He assigns a kingdom to them —but more than that, a table in His kingdom of which they may eat and drink. A table, His table, where He would continue to serve them.  That table, His table where He serves, is this table prepared for you today.

Even in the midst of our betrayal, our self-centeredness, Jesus still serves us and calls us to Himself. He prepares a table for you today in spite of your self-centeredness and selfish motivations. He prepares a table with all the angels and archangels and all the heavenly hosts for you here —to serve you here with that same Body and Blood given into death for you —to forgive you of your sins. He gives Himself to you once again that you would be reminded of who you are as His own. He serves you here that you would be forgiven and renewed. He serves you here that you when you depart, you would go on to serve others.

We depart from His table, having been nourished that we would be kept steadfast in the faith in both body and soul to life everlasting. We depart from this table as servants going in peace, in His peace, to return to a world in which we serve our neighbor—to support our neighbor in every physical need; to speak well of our neighbor and put the best construction on everything.  We depart this table knowing Jesus’ Word has been fulfilled, that our own eyes have seen God’s salvation that He has prepared in the sight of every people. We depart that we might bring that Word of promise and hope, that light to the nations, to those who are in need.

Always, always always....remember that the Lord hates pride, especially spiritual pride and arrogance. When you hear public figures or even the neighbor next door bragging about themselves, remember that only the humble in spirit will inherit the kingdom of God. Those who put themselves on a throne of their own imagination leave no room for the Lord of Glory. John 3:30, one of my favorite verses, says plainly, "He must increase, but I must decrease." Also, the Bible says, "Let another man praise you, not you yourself, not from your own lips." A man or woman can achieve great things and accomplish much, yet still remain humbled and down to earth, never arrogant or prideful. Remembering that we remain throughout our lives "sinners saved by Grace'" enables us to keep our true character in mind, and causes us to appreciate Our Savior even more.