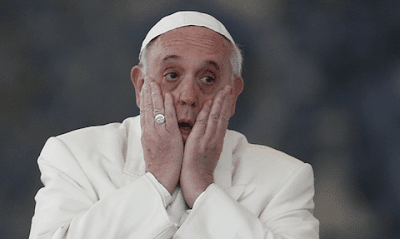 Though a Lutheran would prefer no pope, a bad pope is not good for any Christians.  The current pope may be good or bad, depending upon your perspective I suppose, but he is definitely bad in one sense.  He has an agenda, tolerates no question or disagreement, and has worked around the structures in place (when he was chosen in part to reform them) and even the people in place (some of whom he appointed!).

I meant no disrespect in calling him "Frank."  He has cultivated a humble and casual culture as pope.  He does not wear fancy shoes or vestments.  He does not live in the traditional papal apartment.  He loves the photo op and informal question.  He delights in raising questions about doctrine and solving them by changing practices so that they are inconsistent with doctrine.  He loves to party with the Lutherans -- even more it seems than he loves to play with those Roman Catholics more in tune with Benedict XVI than him.  He seems to want to loosen everything up in the Vatican except papal control.  He seems to delight in micromanaging when it seems things are not going his way and to ignore the very people he has placed in office.  He does not explain himself and appears to be above the details when it is in the details his purpose is being advanced.  What do we make of him?

For many years Roman Catholics stood with Missouri Synod Lutherans and others well outside the Roman Church to present a solid witness against the culture of death advancing across America as it has in Europe.  From abortion to euthanasia to assisted suicide, there have been many challenges we have faced together.  But now it seems there is a strange softening of this pro-life stance and an equivalence between these sins and the sins of oppression.  In fact, in the stand for marriage as a life-long union between man and woman, Rome has become somewhat muddy.  On the one hand, the desire to regularize the many divorced Roman Catholics and the kind of accommodation to same sex marriage and the GLBTQ agenda promoted by Fr. James Martin, S. J., and its seeming suggestion that homosexual unions are no more or less sinful than heterosexual unions, leaves us wondering about our partners in witness against the prevailing morality of the world.  On the other, it appears Rome is no longer the reliable and uncompromising voice for the pro-life cause.  Read here how Frank has reshaped the most important pro-life institution in Rome.  In the case of the recent and well publicized status of baby Charlie, the Vatican statement was a master of waffling when a clear voice was needed.  You can read it here and the commentary here.

At the very time when the Church needs solidarity (in Wittenberg as much as in Rome), we have waffling voices who seem unwilling to say this is what Scripture says, tradition witnesses, and we believe, confess, and teach.  Frank's style of governing is not good for Rome but it is also not good for Christianity in general.  His willingness to live with fuzziness when clarity is required means that real Lutherans and real Roman Catholics are further apart and not closer.  Who knows what will survive if his papacy is long and it continues on this course?  What we do know is the cause of life and the voice of truth in marriage and family have been muddled by Frank to the disappointment of many outside of Rome and, sadly, not nearly enough within Rome's umbrella.
Posted by Pastor Peters at 6:00 AM

I meant no disrespect in calling him "Frank."

Compare to the Smalcald Articles, in which Martin Luther stated: 14] ... Therefore, just as little as we can worship the devil himself as Lord and God, we can endure his apostle, the Pope, or Antichrist, in his rule as head or lord. For to lie and to kill, and to destroy body and soul eternally, that is wherein his papal government really consists, as I have very clearly shown in many books.

And compare to the Treatise, in which Philipp Melanchthon wrote: 41] This being the case, all Christians ought to beware of becoming partakers of the godless doctrine, blasphemies, and unjust cruelty of the Pope. On this account they ought to desert and execrate the Pope with his adherents as the kingdom of Antichrist; just as Christ has commanded, Matt. 7:15: Beware of false prophets. And Paul commands that godless teachers should be avoided and execrated as cursed, Gal. 1:8; Titus 3:10. And he says, 2 Cor. 6:14: Be ye not unequally yoked together with unbelievers; for what communion hath light with darkness?

42] To dissent from the agreement of so many nations and to be called schismatics is a grave matter. But divine authority commands all not to be allies and defenders of impiety and unjust cruelty.

Frankie is a waling, talking, disaster for the Christian faith as a whole. He is no Christian, and he is no catholic. Instead, he is a Jesuit Marxist, bent on the destruction of Christianity and the entire western way of life. The sooner he is gone, the better.

No one will accuse Pope Francis of being an intellectual theologian.
Before he became Pope, he was a populist and political Roman Catholic
leader in South America. He appeals to those cafeteria Catholics who
like to pick and chose what to believe.

You are using the term "Marxist" so loosely as to render it meaningless. It would be closer to the truth to write "Peronist." See Tracey Rowland's recently-published book Catholic Theology (London, 2017: Bloomsbury Publishing) especially the subsections of Chapter 5 ("Liberation Theology and the Papacy of Francis") entitled "Popular Culture as Locus Theologicus (pp. 179-184) and "Situating Pope Francis" (pp. 191-200). The pope is evidently an adherent of an Argentinian version of Liberation Theology entitled "Teologia del Pueblo." However objectionable in itself, and calamitous in its effects, it may be, its "populism" is not Marxist, however similar it may be in some of its outcomes. Rather, to a large extent reflects the notions, and even recycles the "axioms," of a 19th-Century Argentinian military dictator, Juan Manuel de Rosas (1793-1877).

There is no one coherent school of Liberation Theology. The late great Eric Mascall devoted a whole chapter of his final, alas unpublished, book - the manuscript (ca. 1985) is now in the archives of Pusey House, Oxford - The Overarching Question: Divine Revelation or Human Invention to Liberation Theology, making an extended comparison of the ideas of two liberation theologians, Gustavo Gutierrez and Jan Sobrino. He concluded than on all points of Catholic doctrine the former - whose views Cardinal Müller also believes to be orthodox - is orthodox (whatever one may think of his politics), but that the latter has jettisoned Christian orthodoxy for Marxism.

I don't agree with Francis on the issues described above, but I believe some of his motivation is that he is against church leaders who say the right things, "give out the correct talking points", and get promoted, and become self-serving. We all do it to some extent. It is part of our fallen nature. We are meant to help people, and share the good news of Christ. If we do "dialogue", it is not to cover up grievous sins and behaviors, but to show concern, and the love of Christ to other people.