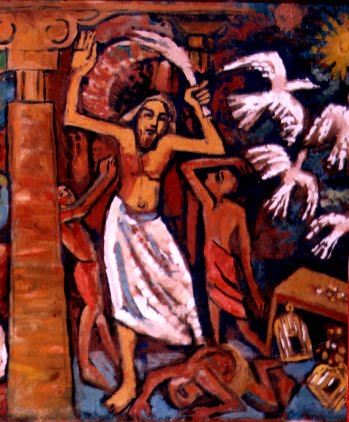 It is always interesting where the individual Gospel writers place things.  Matthew, Mark, and Luke all place the cleansing of the Temple right before Jesus is betrayed, suffers, and dies upon the cross.  It is chronological.  It is when it happened.  But John’s Gospel does not look simply at the timing of it all.  John is interested in what it means.

So today we see the cleansing of the Temple from a slightly different perspective.  Put right after John the Forerunner calls Jesus the Lamb of God and Jesus calls His disciples and does the wedding miracle at Cana in Galilee, turning water into wine.  John makes this one of the pivotal events that both inaugurates and defines Jesus ministry.

The synoptic Gospels record this final act of Jesus’ preaching and teaching of the kingdom before Holy Week, the Upper Room, the betrayal, the arrest, the trials, the condemnation of death, the suffering, and the death of Jesus.  But John wants us to see that this was the whole shape and direction of Jesus’ ministry.  He is come to cleanse the Temple from its business as usual.  He is to restore the house of God as a place of prayer.  But more than this, He is come to tear down the Temple and raise it up again on the third day.

Of course no one got this when Jesus did it.  The disciples did not understand what Jesus was saying or doing.  The Pharisees were only interested in using Jesus’ words against Him so that they could rid themselves of Jesus.  John admits all of this.  He tells us that only after the resurrection did Jesus’ disciples remember what He had said and how He was speaking of His body and not simply a building of stone.  So John has the perspective of those who now realized what Jesus was doing and what it all meant and means.  And we do, too.

Jesus warns the Jews of a religion of hands without heart.  He warns them of the coming destruction of Jerusalem.  He throws it back at the women who wail on His way to the cross. He weeps as the hem who would have gathered them like chicks under His wing but they would not.  He is the prophet to end the line of prophets and to keep all prophecy.

Jesus is received as the King of David with the Hosannas of Palm Sunday and welcomed as the rightful heir to the eternal throne of David.  The people saw it clearly.  Blessed is He who comes in the Name of the Lord.  Blessed is He who sits upon David’s throne.  Hosanna.  Save us, they cried.  It would have been blasphemy if it were not true.

As important as these two offices were, nothing was so sacred to the children of Israel as the Temple.  This was the House of God that David desired but only his son Solomon would build.  This was the place desecrated by conquering armies and rebuilt over and over again.  This was the holy of holies where the sacred blood of sacrifice was poured out over altar and people.  This was the house of prayer where incense rose without beginning or end to the Father on high.  This was where Jesus was brought as a baby and presented.  This was the most sacred space in Palestine.  And still is.  On the Temple mound, the ruins of nearly 2000 years, Jews still gather to wail and lament and pray.  But the building has been gone since 70 AD.

John begins Jesus’ public ministry at the Temple.  He is the High Priest after the order of Melchizedek.  He is the Lamb of God who will not be spared by a ram caught in a thicket. He is the priest who offers and the offering given for the sins of the whole world.  He is the one who binds Jew and Greek, slave and free, male and female together before the Lord to be His own and to live under Him in righteousness and holiness forever.

Christ is the Lawgiver who puts Himself under the Law in His incarnation.  He may be God of God and Light of Light and true God of true God as we confess in the creed but He is also flesh and blood, able to suffer and to die.  He was the voice to inaugurate time itself and He is the King of the ages who is come to fulfill all things for us and our salvation.  He was conceived and born without sin and yet He became sin for us even to death upon a cross.  He became the scape goat sent into the wilderness of death to put our sin as far from us as the East is from the West.  He is the sacrificial Lamb whose blood was shed upon the altar of the cross to pay in full the price of sin and its death.  He is the holy incense whose sweet smoke tells the Father it is done and announces to us as well that atonement has been made.  He is the Passover Lamb whose flesh is to become the food for a pilgrim people moving through the wilderness of the world toward the eternal land of promise God has prepared for them.  He is the obedient Son whose obedience counts for all the disobedient and whose righteousness is big enough so that all may be made righteous.

This is no small thing.  It is the end of an age.  The priestly tribe must surrender to the Christ who is High Priest forever.  The altar of the Temple gives way to the altar of the cross.  The sin of Adam is undone by the new Adam who does for all what Adam could not do even for himself.  Now this God who is too big to dwell in temples made by man has come to dwell in the temple of Christ’s flesh so that we may all be temples of the Holy Spirit by baptism and faith.  The house of God offers no new sacrifice but recalls the sacrifice offered once for all and eats of this bread and drinks of this cup and so participates in the holy offering of Christ and is rendered clean, forgiven, and fed and nourished to eternity.  It may be our weakness to think of Jesus more as a fixer than the One who ushers in the new day of salvation.

And that He does.  He ushers in a new day, the eighth day, the beginning.  But the beginning is not finished.  We are born again but still sin.  We are redeemed but still must be restored.  We are fed but must eat again and again until this journey is complete.  What is it that is said every Sunday:  May He who began this good work in you bring it to completion on the day of our Lord Jesus Christ.  The day of salvation is come but the last day is still coming. So we must be vigilant by faith, near the Lord who speaks in His Word and feeds at His table.

The Lord has not come to repair a broken age or flash the dripping roofs that leak or tuck new mortar into old bricks.  He has come to make all things new.  And starts with the Temple, with the House of God.  What we long for is begun here but not made complete until Christ is the Temple and its Light in heaven forevermore.  All things are being made new.  Even you and me.

So do not grow too attached to this world.  Do not despair too greatly its passing away. We are not destined for a band-aid.  God will make all things new.  We are citizens of an eternal city but for now we must live here.  So we will not succumb to the love of treasures that are passing away or indulge ourselves into the passions of lust and desire.  We are to live as a people who belong to heaven.  And that is our mission today.

We who hear this Gospel bear the responsibility of keeping this Gospel ever before us and presenting it to the world around us.  As those who belong to Christ, we have a high calling in this world to sweep clean the path of Jesus with the preaching of the Law and to pave the highway of our God with the preaching of the Gospel.  He is coming.  Amen.
Posted by Pastor Peters at 6:00 AM

Amen. Thanks for sharing.

Thank you for preaching this powerful word, this means of grace. Keep on keeping on.