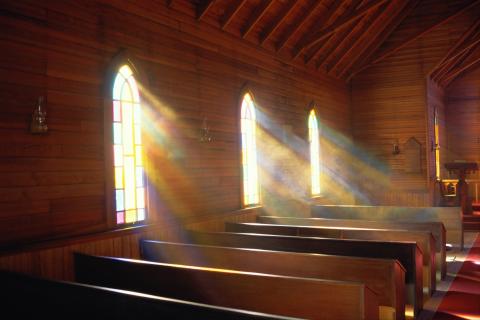 Apparently the deep and long standing tensions over the ordination of women may lead to an exodus from the Anglican Church in North America (ACNA) for the Anglo-Catholic minority.  In a scene quite familiar to those with history in the Episcopal Church, the petition of those against the ordination of women to put that practice on hold until the whole ACNA had come to one mind resulted in the suggestion that those opposed to women's ordination might just hop the next train to Rome.  In the end, some of those signaled that they got the message and the Bishops of the Anglo-Catholic ‘Missionary Diocese of All Saints‘ have said that they are considering doing just that -- except Rome is not the destination but, well, Poland.  They are going to look at uniting with “Non-Papal Catholics” (specifically the Polish National Catholic Church (PNCC).

The ACNA has preserved the broad/low church and anglo-catholic tensions that were such a problem in the Episcopal Church.  It turns out those leaning more Protestant than catholic are very wedded to the ordination of women and have determined that this is a non-negotiable point.  In the end, it may not be a one stop shopping trip for a destination.  It seems that the Diocese of All Saints has clergy searching a variety of options -- from the Personal Ordinariate of the Chair of St Peter to the Western Rite Orthodox Vicarate for the Russian Orthodox Church outside of Russia (ROCOR), as well as the PNCC.  It is not known at this time what the outcome of the 35 parishes might be.  In any case, it is a wake up call for the ACNA.

And why does this matter?  Because we generally like the idea of the ACNA, the LCMS has had conversations with the ACNA, and, depending on who you talk to, those conversations seem very fruitful.  No, we are not even close to any fellowship agreement but we have spoken at length and in depth and have issued a few common statements.  The real question is always, who are you talking to?  It turned out the Rome was talking to a sliver of Lutheranism in the RC/Lutheran dialogues in the US because the church of most of those participants in the dialog ended up in the ELCA, a decidedly most uncatholic church when it comes to social positions and doctrinal integrity (even with the Book of Concord).  It could turn out that we were talking with people who did not fairly represent the ACNA.  I cannot say.  But it is the problem inherent with ecumenical dialog.  As much of a problem as it is, it is not enough of a problem to end such conversations -- only a warning and a caution before proceeding in the ultimate goal of agreement in the Gospel and all its articles.
Posted by Pastor Peters at 6:00 AM

"... except Rome is not the destination but, well, Poland. They are going to look at uniting with “Non-Papal Catholics” (specifically the Polish National Catholic Church (PNCC)."

Well.... actually not Poland, but Scranton, PA, which is the PNCC headquarters.

"Because we generally like the idea of the ACNA, the LCMS has had conversations with the ACNA, and, depending on who you talk to, those conversations seem very fruitful."

"The theologians of 17th-century Lutheran Orthodoxy taught that, as the Church becomes visible through the means of grace, she is seen to be the 'synthetic' or 'composite' Church (ecclesia synthetica), composed of laity and clergy. ACNA likewise teaches the biblical doctrine (1 Cor 3:9; Phil 1:1b) of the divinely willed distinction of laity and clergy who are to work together in the mission of the Church."

This statement contradicts the Lutheran Confessions, as understood by Lutheran theologians, Kirche und Amt, and officially by the Missouri Synod. The invisible Church does not become visible. The marks of the Church are visible. In his Christian Dogmatics, J.T. Mueller states: "All who affirm that the Church is either wholly (papists) or partly (modern Lutheran theologians) visible destroy the Scriptural concept of the Church and change it from a communion of believers to an 'outward polity of the good and the wicked'."

And despite the ACNA/LCC/LCMS spin-the-bottle games and the wishy-washy tapdancing, the ACNA still allows the ordination of women.

The ACNA/LCC/LCMS mash note, "On Closer Acquaintance," starts out (p. 2) admitting that "neither side of our dialogue expects to achieve altar and pulpit fellowship with the other in the foreseeable future". But later, the report proclaims (p. 6):

"The remarkable convergence of our two confessions on this point of doctrine [justification] on which Luther comments, 'When this article stands, the Church stands; when it falls, the Church falls' (WA 40 III. 352, 3), gives a strong impetus to our churches to implore the Lord’s assistance toward our achieving the degree of consensus that would make full church fellowship possible."

It appears here that the LCMS signatories are claiming the ACNA/LCC/LCMS church bodies have only to achieve some unspecified (Is it the magic 85%?) "degree of consensus", rather than full agreement in all articles of doctrine, for altar and pulpit fellowship between the LCMS and a small (130K) church body that permits the ordination of female pastrixes, and shows in its September 2017 official statement no significant desire to recant such heterodoxy.

Going well for whom? It seems to me that ACNA is delivering exactly what the mildly conservative evangelical Episcopalians (who are the great majority of its founders) designed it for. ACNA is a snapshot of low-Church Episcopalianism in the late twentieth century: a doctrinally flexible, non-confessional, middle-of-the-road Protestantism with some Catholic trimmings but little Catholic substance. That is exactly what most of ACNA's founders wanted, and they got it. For them, things are going fine.

In my view, most serious Anglo-Catholics had already left ECUSA for Rome, Orthodoxy, or Continuing Anglicanism in the 1970s and 1980s due to the ordination of women. (Honesty compels me to note that this opinion is biased in that I was myself one of those A-Cs who left at that time and for that reason.) Of those A-Cs who stayed in ECUSA, a large part were liberal Catholics who were able to reconcile themselves first to the ordination of women and later to homosexualism. The Anglo-Catholics who were traditional and orthodox were few, and when ACNA was formed they were lost in a sea of happily Protestant Anglicans.

If they are now beginning to look for a more congenial home in places like the PNCC or Western-Rite Orthodoxy, I can only say "what took you so long?".

As for the conversations between ACNA and LCMS, I've always regarded them as something of a long shot. What makes the relationship plausible is the idea that both denominations are Biblically conservative and traditional with respect to liturgy and sacrament. But we have both parts of that common ground only with the Anglo-Catholic part of ACNA, and if they are peeling off we are left with no one to talk to. In my view, an ecumenical relationship that was always tenuous then becomes untenable.

ACNA waited too long before leaving ECUSA. As a consequence, they brought the ECUSA-virus with them, and they are thoroughly contaminated.

For Anglo-Catholics, Rome is not really much of a choice at all. I have looked hard at Rome (I am an Anglo-Catholic), and there is just too much there that is bogus. In many respects, the Anitochian Orthodox are an attractive possibility, but there are problems there as well. Being an Anglo-Catholic at this point just about forces on into the Continuing Anglican movement, such groups as the Anglican Catholic Church, the Anglican Church in America, the Diocese of the Holy Cross, and a few others.

Rule of Thumb: When an ecumenical church wants to join a dialogue, it is in order to neutralize orthodoxy or better yet, to bury it.

Estimated membership of the ACNA: 112,504 members. If the Anglo-Catholics leave for Rome, for the EO, or for the 26,000 member Polish National Catholic Church (PNCC), then what will become of the remaining part of the ACNA?


In other news, the UMC will "officially" become a liberal church body: