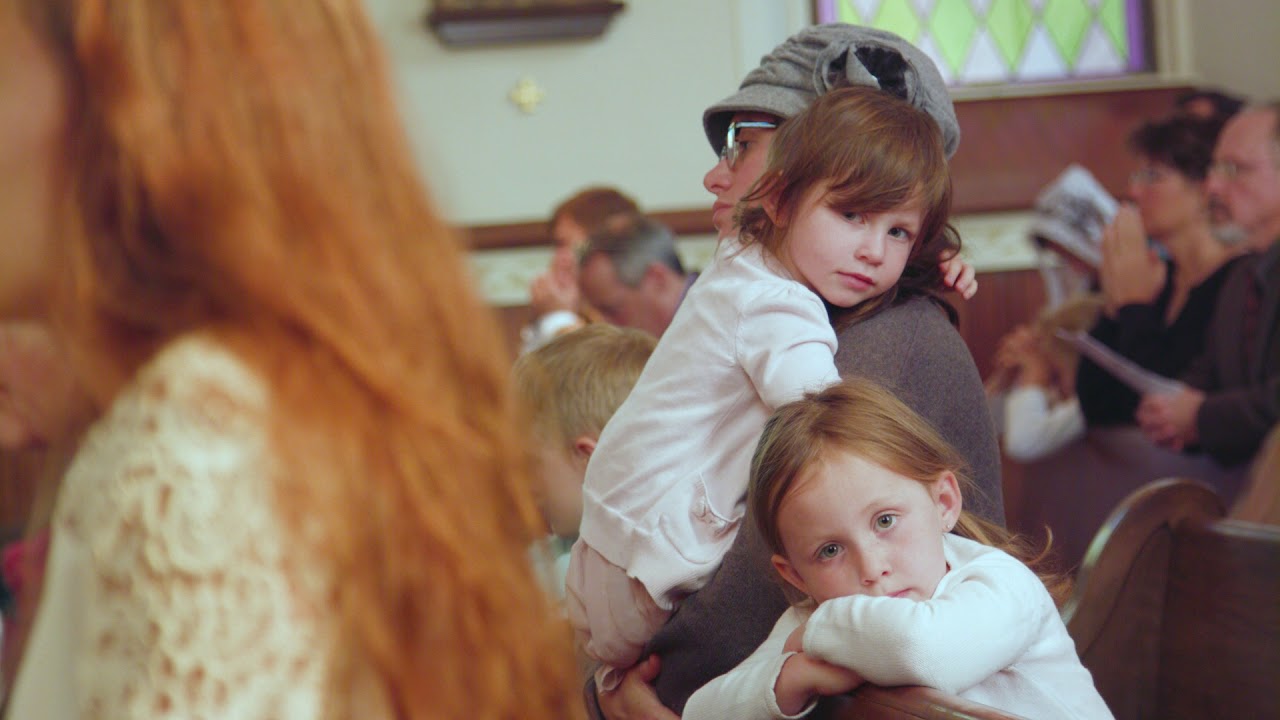 I will gladly admit that our Sunday liturgies are filled with the sounds of children fidgeting, talking, and often enough crying.  They distract some who believe that the liturgy should be a refuge of silence.  But there is a difference between the noise of adults who cannot keep their mouths shut and small children who are being, well, kids.  Sometimes we forget that.

Oh, sure, there are times when a parent has forgotten that discretion is the better part of valor and waited too long to take out an uncooperative child for a little pep talk or to be able to find out what is wrong without involving the rest of the congregation.  I get that.  But I will gladly cut any parent the slack they need.  Having kids with you in the pew is not the stuff for cowards or the faint of heart.  In the past it was rather common for the folks around a struggling parent (especially a parent who is in church alone with his or her children) to give them a helping hand.  Today it is often feared that there is an agenda at work here.  It should not be.  Would that we could gladly extend a bit of help to a parent or parents struggling with an unhappy child and it would be seen as a gracious thing and not one of judgment or fear!

The truth is that sometimes such young families have things that cause them to be late.  An unexpected diaper change or wardrobe malfunction or the like.  It is not that they intend to be late but sometimes they are.  I, for one, am happy that they chose to be late rather than not to come at all.  Maybe there are those who get frustrated but, hey, what is the goal here?  To have pews with children of all ages AS WELL AS adults.  So count me happy to see them when I am sure there is a story to tell about everything that went wrong in their attempt to make it on time.  The sad fact is that we have adults who are habitually late as well but because they have the advantage of being more discreet, they can get away with it without the raised eyebrow or wagging head of those who want the family to know "Hey, you're late!"

I also realize that kids move around.  That's okay.  In my family my wife (a single parent in the pew anyway) was quite adept at handling three small children with a variety of Cheerios or books or a quiet toy while I was blissfully ignorant up there in the chancel.  She did a yeoman's job of making sure our kids were dressed and in church.  It can be done.  Kids are kids so cut them so slack.  She knew when the movement was too much and when they were being kids.  The parents need to know that we understand.  Hey, I have had a quick footed child wander away and into the chancel.  The roof did not cave in and, though the parent was dying of embarrassment, I wasn't.

Kids are sponges.  They learn by watching and listening.  Don't stick a small child in the back pew where an odd assortment of behinds are the only things to see and where they can sometimes miss what is being said.  Give them a good seat, up front, so they can watch and listen. . . and learn the liturgy.  My kids were singing the liturgy with all their hearts and all the volume their lungs could muster -- often on long car trips!  They learned by doing and by hearing.  St. Paul had something to say about that.  Kids will learn anyway so why not give them the Divine Service to learn???

If the church ain't cryin', the church is dyin'.  I read that somewhere.  Now surely we are just as glad over a 99 year old in church (and we have 'em) as we are a 9 year old or a 9 month old.  Nobody is picking one group over the other.  The best congregation is when there is a mix of those with years of faith and those new to it -- together in the Lord's House on the Lord's Day!  There is nothing sadder than a church without kids.  Believe me.  I have been there.  I have been the youngest person in the congregation at age, well, over 50, shall we say.  Most of those grey, white, and no haired folks would have rejoiced to see the face of a child.  Don't stick them away in children's church either.  Nurseries are there for the odd emergencies and not for normal Sundays.  And, if you will let him, let your pastor give them a hug or a tickle on their side so that they learn that this guy is their pastor just as he is their parents.  Oh. . . and Happy Valentie's Day!

Thanks for writing this. As a once single dad trying to faithfully inculcate the faith of his children, often in competition with competing views from outside the home, this cannot be overstated. We need to intentionally cultivate the faith of our children both at home, but also in the corporate setting of the Church.

Our parish has both a "Cry Room" and a Nursery during the
worship services. In the "Cry Room" a mother can take her
baby and still observe the worship service and hear it.
This room has several of the best oak-made rocking chairs
you will find.