Is it the Tower of Babel all over again. . . 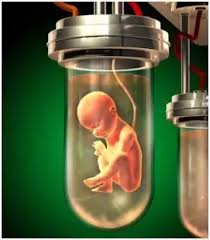 Early on in Genesis is the story of a people who built themselves towers into the heavens so that they could be like God.  You know the outcome of it.  Not only the towers came down but the confusion of the tongues left us with a world without a universal language until Christ came.  Perhaps the towers were too obvious.  Perhaps God is not in the heavens.

Modern man has decided that the place to find God and be gods is inside, specifically in the DNA that defines us as people.  The path to the divine then is not in the control of the heavens but the ability to manipulate our DNA.  In theory, man can now edit the genes of any child at will to create  babies to order with specific characteristics and traits considered desirable by the parents.  It began with reproductive technology that took the whole thing from husband and wife and placed it into a lab and a dish.  It led to the divorce of children from marriage and then sex from love until these things became ends in and of themselves -- not related parts to a whole but bits and pieces shaped by desire and want on the part of people.  Spouses were no longer essential to having a child anymore than marriage was essential to adulthood and life.  Children optional led to children shopped for and created by whim through the miracle of modern technology.  Where is God in all of this?  Have we not become gods who can command life and design it?

The first and most important ethical principle of medicine is Primum non nocere.  First, do no harm.  That lies pretty much forgotten on the trash heap of a world in which life is not sacred but a commodity.  It is not enough to prevent the conception, we must be free to wash away the baby from the womb and, if that will not do, cut up the remains and kill the child so that it can be flushed away.  It is not enough that we no longer value age.  We must be free to decide for ourselves when life is no longer worth living and when the lives of others are not worth keeping.  We have lied to ourselves often enough that we truly do believe that there are some lives not worth living, that there are things worse than death, and a life unwanted is better prevented or ended.  Do no harm.  Indeed.  We have convinced ourselves that we are not doing harm but have a higher good that forces us to let go of past understandings of right and wrong and to silence the voices of those who try to hold us accountable to the ancient wisdom.

How are we not like the people of Babel?  How are we not like those who find God a mystery to be cracked so that we can displace the Lord of Creation and become Him?  And what was God's response to some buildings that betrayed an ego out of control?  Can we look forward to such judgment now?  These are questions not be pondered by those who insist we have the technology, we can make and do things better, and we really do know what we are doing.

I look at my granddaughter, fearfully and wonderfully made and I cannot help but wonder whether we have a clue what the ethical parameters are for this penchant to tinker with the lifeblood of those who come after us?  Is it not enough for us to care for them faithfully?  Must we condemn our children and grandchildren to suffer the indignity of being tailored to the fashion du jour?  Who are we to have the power and use it without much thought as change the genes of future generations of persons -- literally once for all?   Has love become so fragile and weak that we will only love those whom we design?  Are we so fearful of that we cannot control that we will risk everything to make the child we want instead of the child God gives?

We cannot create social media that will not spill our information to whomever wants it and we cannot figure out how to make such a platform work without exposing the vulgar, ugly, and hateful things within us.  Who will keep the people in line who work the magic that fixes the things we find problematic in our kids?  I love technology but I fear it more because I know who runs the machines and makes the decisions about what we will do with what we are able to do.  More than this, I fear God.  Not because God will want to punish our pride (though He should) but because it is His track record and duty to save people from themselves.  Lord, have mercy.
Posted by Pastor Peters at 6:00 AM

I agree. Technology has brought arrogance to the forefront. In America and in the West, infanticide is now openly practiced and promoted. What does Our Lord do when civilizations become so debased? He will judge them and correct them, and His judgment and punishment will rain down on the just and the unjust.

Countries like Iceland and Denmark have "cured" Down Syndrome. And the US is not far behind.

Anonymous on February 13, 2019 at 9:13 AM put the word "cured" in quotes. Anonymous was simply using a 1984 Newspeak term that really means "murdered the children in the womb with."

On Sunday in New York, Jennifer Irigoyen, who was five-months pregnant, was stabbed to death by her "boyfriend," who also murdered the unborn child.

The murderer of Jennifer will not be charged with the murder of her child because in January, the Satanic-led legislators in New York voted (Senate:38-24; State Assembly 92-47) for the so-called “Reproductive Health Act” (RHA). Demonicrat Gov. Andrew Cuomo signed the bill that erased the state’s recognition of preborn babies as potential homicide victims.

I join with Martin Luther in his imprecatory prayer that "we, too, pray for our angry enemies [the NY Governor, state legislators, and those who elected them], not that God protect and strengthen them in their ways, as we pray for Christians, or that He help them, but that they be converted, if they can be; or, if they refuse, that God oppose them, stop them and end the game to their harm and misfortune." (E. Plass, What Luther Says, St. Louis: Concordia, 1959, #3517, p. 1100)