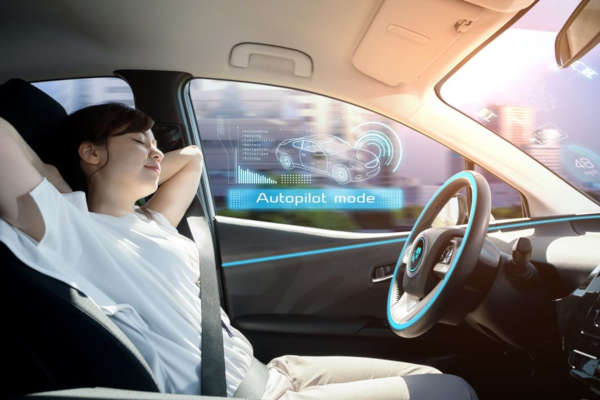 While making an extended trip recently, I rented a car that had lane assist, smart cruise control, and blind spot alarm.  Literally, you could lift your hands off the wheel (which I do not recommend!) and the car would drive itself, centering it in the lane, keeping appropriate distance from the traffic ahead, and monitoring the speed.  Wow.  At first I fought against these technologies.  Later I became more accustomed to them and even welcomed the second tier of oversight of my driving and the driving of those around me.  It is a precursor of that day when the driver of a car will not be directly involved in the moment to moment control of the car but a back up to the self-driving technology that is most certainly in the future.

Christians run the risk of the same kind of auto-pilot.  We can easily presume that we don't have to willfully do anything.  Good works will just happen.  We do not have to consciously work for them.  We will automatically know right from wrong -- we don't need to be guided by God's own words of instruction (the Law).  We will pray when and if the Spirit moves us to pray -- piety does not need to be deliberately scheduled or directed.  We will go to Church when and if we need to -- we do not have to do anything (we are under the Gospel, for Pete's sake, not the Law!).

Yes, there are people who actually think like that.  Too many of them.  Too many of them Lutheran as well.  It is as if our spiritual lives just happen.  For too many Christians, the will does not need to be shaped or directed or constrained.  It will happen.  Apparently St. Paul did not get that memo.  Read the words of St. Paul, the preaching of letters, to Christians where auto-pilot was not working.  He is blunt and sometimes painfully so.  He does not shy from commanding Christians to do what is good and right and true.  He does not presume anything but compels Christians to walk worthy of their calling in Christ.  He does not leave sanctification to chance but tells Christians to listen to the Word of the Lord and then to do it.  The same comes from the writer of Hebrews.  He does not leave church attendance to chance but compels those in his hearing NOT to neglect the weekly assembly around the Word and Table of the Lord.  St. James does not at all deny justification by grace through faith but also is very conscious of the old Adam still lurking in the shadows of the heart and so he says in the most clear of words "faith without works is dead."

We live at a time when people think of their lives in Christ as solitary and individual, where church is optional and where the voice of God speaks more clearly in their hearts than in His Word.  They suffer from the same passivity of the car with such wonderful tools that can fool the driver into thinking he does not need to do anything.  But we Christians cannot afford to be asleep at the wheel.  That is even more profoundly true for Lutherans.  Our heritage and treasure in justification does not preclude nor eclipse the training in righteousness which should and, indeed, must happen in us.  God justifies us without any cooperation on our part but our sanctification happens with the operation of the will.  And the fruits of this show up in our need to be together in the Word, at the Table of the Lord, and in prayer before His throne of grace.  Sometimes I encounter people, sometimes my own lapsed members, who think that church works against their spirituality.  They are on auto-pilot and have bought into the lie that they not only do not have to do anything, but anything they might do could and probably will work against their spiritual comfort.  And that is exactly what sometimes God is doing.  A little spiritual discomfort is the fruit of honest Biblical preaching -- making sure that we do not doubt the certainty of what God has promised but neither taking for granted His gifts by presuming we don't need to do anything to keep them.
Posted by Pastor Peters at 6:00 AM

For those Christians who think that they are doomed simply to remain as they are, but at least they will have correct information, we can encourage them that in fact they are NEW CREATIONS and they have been TRANSFORMED and are being transformed, to WALK in newness of life. This is right now, right here, not merely a "then and there in the sweet bye and bye."

It is GOOD NEWS...anyway you look at it.