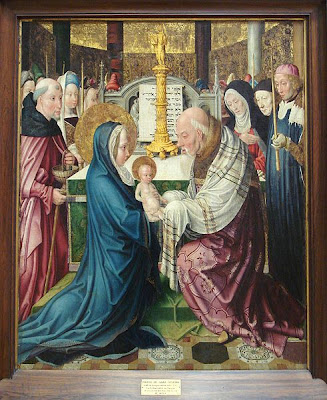 Sermon for the Presentation of Our Lord and the Purification of the Blessed Virgin Mary preached on Sunday, February 2, 2020.

Though you might not come to this conclusion by looking around us this morning, we live in an age in which children are not seen as a gift or blessing of the Lord but burdens we are not sure we want to bear.  Our congregation is an anomaly.  In most places the number of children is shrinking.  While for some this is a problem conceiving, for nearly all the rest it is a choice made.  They have decided children are not necessary, not good, and not morally responsible anymore.  Okay, maybe you can justify one child, but many secretly harbor the fear that some of our presidential candidates openly admit – who would bring a child into a world like ours?  They have decided that children are not simply a burden to their parents but a burden to a world of climate change and carbon footprints.  They have decided that the sacrifice of parenthood is not worth it and better to keep your money and time for yourself than to give it over to your children.

We live in an age in which children are treated as accessories to our lives, toys that we purchase when we can afford them and when we have fulfilled all our other desires of wealth, experience, and accomplishment.  When we are ready and have done all that we want to do, then we may consider having a child.  When we want a child, we will turn to reproductive technology to produce a poster child of all the qualities we desire without any risk of defect.  Until that day when the child we prize is produced in the lab, children are expendable to us, to the tune of 62 million.  As a culture we have decided we will end pregnancy on the government’s dime because now is not a good time, as if there is ever is a good time to have a child.  Birth control freed sex from the possibility of children, divorced sex from love, and took from love the expectation of marriage.

What has happened to us that we no longer value or desire children, that we no longer consider them gifts of God, and that we no longer presume that life is sacred?  This day is a day out of step with the world around us and a stark reminder that the values of the Kingdom of God are not the values of the world.  Maybe they are not even our own values since the reality is that Christians seem to learn their morality less from Scripture than from the world around, from the media, and from a radical individualism which equates marriage with slavery and children as not worth the sacrifice.

On this day we remember that the Lord has come to His Temple, but not as the mighty God who sits on high.  No, He has come as the God in flesh to fulfill the promise of salvation, to offer Himself as the Lamb of God who takes away the sin of the world, and to rise up to bestow upon a people marked for death the gift of eternal life.  Wow, I bet nobody saw that coming when Mary and Joseph slipped into the Temple to do for Mary and Joseph what every Jew did when a child was born.  Oh, wait, somebody did see it coming.  Simeon saw it coming.  He was a righteous man, a devout and pious Jew, who was waiting for the consolation of Israel and on whom the Holy Spirit rested.  He saw it coming.  This was not an ordinary family doing the usual thing but extraordinary.

This stranger to Mary and Joseph grabbed the baby in their arms and raised Jesus to the Lord and began to sing.  Lord, now You let Your servant go in peace, according to Your Word. . .  Mary and Joseph may have thought they were there to offer the sacrifice the Law required but Simeon reminded them that this child was not theirs but the Lord’s own anointed Savior.  He was come to enlighten the Gentiles from the darkness of their unbelief and to fulfill the promise of glory to Israel.  But this was no golden boy who was born with a silver spoon in His mouth.  No, Simeon was solemn.  He shall see to the risen and falling of many.  He shall be a sign opposed.  He shall piece Mary’s heart with sorrow.  He shall expose the sinful hearts of men in order to redeem them.

As if this were not enough, an aged prophetess named Anna showed up.  She took one look at Jesus and shouted in thanksgiving to God for Jerusalem’s waiting was over.  The Savior had come whom God had promised.  Again, you might think that Mary and Joseph would have fallen over in shock but this was the same Mary who receive visits from angels and pondered all things in her heart.  This was the same Joseph who got his own visit from angels and who believed the most important thing of his life was taking care of this child.  They finished doing what the Law required and headed back to Galilee where Jesus grew, became strong, and manifested the favor of God.

The Lord has come to His Temple.  He came as a child born of Mary, to be set apart for the Lord’s will and purpose, saving us by His obedient life, life-giving death, and mighty resurrection.  Mary and Joseph thought they were offering God a sacrifice but God was preparing His one and only Son to be the sacrifice that takes away our sin. As parents, we often think that ours is the sacrifice, the many things we give up in order to provide for our children.  But we are doing nothing that God has not done for us in an even greater way.  The family is not incidental to God but His gift in creation and the most basic place where we learn His goodness and live out His kindness one to another. The home is not just some place where we hang our hat but the place where we live out our baptismal vocation – husband to wife and wife to husband.  Children are not burdens God places upon us but gifts and blessings from the Lord.  They are given to us as sacred trust and responsibility, that we may bring them up to know the God who came to us as a child and whose sacrificial death has brought us forgiveness and life.

Our calling is to do no less for our children than God did for His only Son.  Have you ever wondered what it was that set apart Mary to be the Mother of our Lord and Joseph to be His guardian?  The only qualification noted about them is that they were people of faith, who treasured the Word of the Lord, who knew the House of God as their familiar home, who trusted God’s promises when the world seemed to them a confusing mess, and who would raise their children in this holy faith and fear of the Lord.  Mary and Joseph did for Jesus and for themselves what God in His Word called them to do.  And in that blessed encounter, the identity and purpose of Christ and His life was revealed to them.

Though we live in a world where children are no longer seen as blessings and gifts, you as parents are called to do for Your children nothing less than that which the Word of the Lord requires.  You are to bring them up to know the Lord, to know as familiar home the Lord’s House, to see their Pastors as the voices through whom God speaks His Word, to enjoy the means of grace as the vehicles by which we are made and kept the children of God, and to know what is good and right and do what is good and right – even when it is not popular.  This calling of parenthood is not a sacrifice we must bear but our vocation as God’s people, as husbands and wives set apart for His purpose, as godly families to show forth to the world the goodness of the Lord, and as those who know that who we are is not defined by what we do but what God has done for us.

Mary and Joseph stood for all parents when they brought Jesus into the Temple to do for Him what the Word of God required.  Now is your time to stand with them in acknowledging the goodness of God, the gift of children, your responsibility to bring them up to know the Lord, and to know most of God, that God came as a child under the Law to fulfill the Law for us, to offer Himself upon the wood of the cross that we might be saved, and to rise on Easter morning with healing and hope for everyone captive to sin and its death.  This is YOUR witness before the world and this is your vocation as people of faith.  In the Name of Jesus.  Amen.
Posted by Pastor Peters at 6:00 AM

There is a strong and convincing argument to be made for all professing Christians to actively vote against any and every Democrat running for office in the United States, This is the political party of abortion, and infanticide. Since all unwanted children are worthy of death in the eyes of the Democratic Party, which proudly and arrogantly boasts of this position, it cannot and should not be overlooked or dismissed lightly by those claiming to follow Jesus. If this offends any readers, it is too bad. Murder is murder, and this is what the Democrats, in their unwavering support of Planned Parenthood, are in league with Satan and his minions.