Pitched his tent toward Sodom. . . 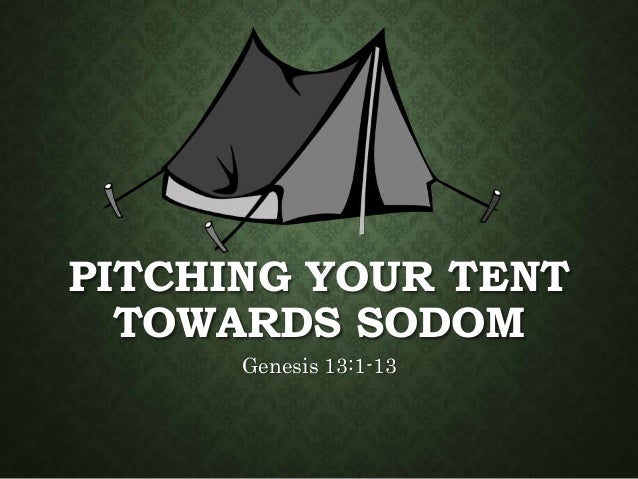 I don't know why I did not see it before.  Read through the account of Lot and Abraham separating their herds and choosing different grazing grounds.

So Abram went up from Egypt, he and his wife and all that he had, and Lot with him, into the Negeb.  2 Now Abram was very rich in livestock, in silver, and in gold. 3 And he journeyed on from the Negeb as far as Bethel to the place where his tent had been at the beginning, between Bethel and Ai, 4 to the place where he had made an altar at the first. And there Abram called upon the name of the Lord. 5 And Lot, who went with Abram, also had flocks and herds and tents, 6 so that the land could not support both of them dwelling together; for their possessions were so great that they could not dwell together, 7 and there was strife between the herdsmen of Abram's livestock and the herdsmen of Lot's livestock.

The land was not able to sustain all their needs for they had an abundance of livestock and servants and were tripping over each other, not to mention the fact that the pastures were being eaten to the dirt.  People were becoming resentful of each other.

Then Abram said to Lot, “Let there be no strife between you and me, and between your herdsmen and my herdsmen, for we are kinsmen.[a] 9 Is not the whole land before you? Separate yourself from me. If you take the left hand, then I will go to the right, or if you take the right hand, then I will go to the left.” 10 And Lot lifted up his eyes and saw that the Jordan Valley was well watered everywhere like the garden of the Lord, like the land of Egypt, in the direction of Zoar. (This was before the Lord destroyed Sodom and Gomorrah.) 11 So Lot chose for himself all the Jordan Valley, and Lot journeyed east. Thus they separated from each other. 12 Abram settled in the land of Canaan, while Lot settled among the cities of the valley and moved his tent as far as Sodom.

Abraham left the choice of locations to Lot.  Lot, however, was moved by the rich ground, pitching his tent toward Sodom.  He was moved by visions of grandeur, of an easier life, and of an abundance that would satisfy his wants.  Abraham left him to the choice and each went their separate ways.

The missing sentence in these quotes is a big one.  Lot was filled with wickedness and the men were great sinners.  It was a sign of things to come.  Lot was captured and his many possessions and great wealth confiscated and Abraham had to rescue him and his family.

Perhaps that is the problem facing liberal or progressive Christianity.  They have pitched their tent toward Sodom, enticed by visions of grandeur.  Instead, the enemy has stolen their identity and robbed them of their treasure.  Their voices are left to lamely echo the sounds of the public square and the authorities of the age have rendered the unique things of the Gospel forbidden and not to be tolerated in public speech.  And now, oblivious to what they have lost, we wait for what we hope will be an Abraham to rescue us and retrieve the church from its captivity.  That is what happens when you pitch your tent toward Sodom or to any political or religious identities that are not the Triune God and the Gospel of Jesus Christ and Him crucified.  But too often we find the vision too tempting and go for broke in our pursuit of an easy relevance and esteem among men.  In the end, the only thing that matters is faithfulness to God, to the voice of His Word and to the tradition each generation has handed down faithfully, from the baptized of one age to another.

In the end, Abraham was blessed beyond imagination and, well, you know how Lot's story ended.


After these things the word of the Lord came to Abram in a vision: “Fear not, Abram, I am your shield; your reward shall be very great.”

Or how about this:

The sin of Sodom was not homosexuality or immorality but the sin of Inhospitality to the visitors sent to Lot. Nice one, no?

Could be the separating of the sheep from the goats? Scripture is always true!