Castro back into the good graces of the church? 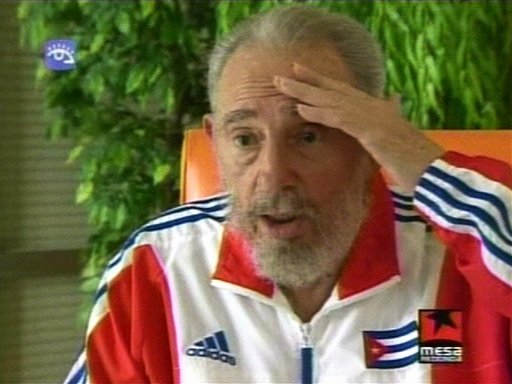 The story has it that Fidel Castro has found Jesus and wishes to return to the communion of the Roman Catholic Church in which he was raised.

Fidel Castro will be received back into the communion of the Roman Catholic Church during Pope Benedict XVI’s visit to the island in March, the Italian press is reporting. If true, this is a remarkable story — and one that has yet to catch the attention of editors this side of the Atlantic.


On 1 Feb 2012, La Republicca — [Italy’s second largest circulation daily newspaper, La Republicca follows a center-left political line and is strongly anti-clerical; not anti-Catholic per se but a critic of the institutional church] — reported that as death approaches, the octogenarian communist has turned to God for solace.

The end of the paragraph seems to put it well.  As death approaches..... [turn] to God for solace...  Death performs us a salutary service when it cuts through accomplishments and legacies, philosophies and ideologies, and forces us to see the very fragile nature of our mortal lives.  Castro is larger than life in so many ways (though perhaps only because Americans and events in history have magnified him) but he is also no larger than any one of us when facing age and the prospect of a death soon to come.

I am certainly not the one to judge him and determine his eternal dwelling place (and both Castro and I should be thankful of this). But whatever the events of Cuba's history or his role on the international stage, Castro has become now what many, if not most, will become -- an old man [person] staring into the lonely face of death.  Where can we go for comfort except to the Lord of life?  This writer is certainly no fan of Castro and is thankful I am not put in the place of deciding Castor's place before the altar, but I cannot help but smile at the prospect of such a man looking at death and clinging to the hope of the Gospel for life.  Would that we all would have such a perspective on our mortality that we, too, were driven into the arms of Him who alone is the Way, the Truth, and the Life...

Here is more from Dr. Tighe:
Posted by Pastor Peters at 6:00 AM

Excellent post. However, it does occur that if Mr. Castro were penitent, and desiring to re-embrace the Church, there are local priests who could handle the matter for him, quietly. Certainly, let a photographer record the event for the record, and he should indeed greet the Pope in public in March as another communicant of the Church.

Something about stage-managing the event, i.e. only the Pope can welcome Fidel back into the fold, feels contrived.

Thanks for the heads-up and your thoughts. Wonderful work as always.

How could the Cuban public be convinced that this would not be an imitation of a phony USA politician proclaiming his love for God?

I would love to see Castro make detailed public proclamations throughout the land regarding his thoughts about Jesus and the Church. Would this mean that the churches could be reopened and rebuilt. Until Cuban leaders actively encourage the citizens to embrace Christianity, I remain skeptical.

Old South is right. There is nothing whatever about Fidel's excommunication that requires a pope, except the staging for a secular event.

Fidel and I share the same type of excommunication -- latae sententiae. Or at least I hope I am so excommunicated. The problem with that kind is you ain't got no papers to prove it!

Maybe I'll ramp it up at Past Elder until they bloody throw me out, maybe even bring back the old bell, book and candle!

Yeah, it's a shame they are so quick to excommunicate over tricky doctrinal issues, yet horse's assism rarely gets public chastizement.

Whether this is PR, grandstanding, or the man is really penitent, and frightened at the prospect of meeting his Maker can be discussed till the proverbial cows come home.

Christ has the place of Judge.

Its no surprise that Fidel Castro was raised by Jesuits--it was the Godless Jesuits who developed Marxism--long before Karl Marx--in fact Karl Marx was trained by Jesuits!

Bowing down to the pope who is [an] antiChrist and whoring oneself to Catholic sacraments--will not save ones soul--Godless Catholicism is a works based religion--as such is not genuine Christianity.

This and this alone will bring a person to God:

9 That if thou shalt confess with thy mouth the Lord Jesus, and shalt believe in thine heart that God hath raised him from the dead, thou shalt be saved.

10 For with the heart man believeth unto righteousness; and with the mouth confession is made unto salvation.