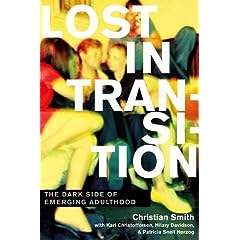 An important 2011 book merits some attention if you have a concern for the state of youth and young adulthood.  It is called Lost in Transition: The Dark Side of Emerging Adulthood (Oxford University Press) by University of Notre Dame sociologist Christian Smith and his research team (Kari Christofferson, Hilary Davidson, and Patricia Herzog). Their extensive interviews and surveys give us not only a picture of the thinking of 18-30 somethings, they also give us some conclusions based on their samples.

Lost in Transition sets the stage by identifying six “macrosocial changes,” building over the past several decades, that Smith and colleagues believe have combined to dramatically alter the experience of life between 18 and 30.

The big six changes, in Lost in Transition’s view, are: (1) the extension of formal schooling into the 20s and the consequent postponement of entry into careers; (2) the delay of marriage; (3) a changing national and global economy that has replaced the prospect of stable careers with frequent job changes, a need for ongoing training, and a heightened sense of insecurity, all contributing to a general disposition in young adults to maximize options and postpone commitments; (4) the willingness and ability of many parents to support their children well into their 20s and even 30s, thus enabling them to take a long time to settle down into full adulthood; (5) readily available birth-control technologies that have severed the link between sex and procreation and fostered uncommitted sexual relationships; and (6) postmodernism, a philosophy that has promoted subjectivism (there is no objective truth) and moral relativism (what’s moral depends on your point of view), both of which now thoroughly permeate the educational ethos, mass media, and youth and adult culture.

As a result of these six converging cultural changes, Smith says, the transition to adulthood today is significantly more protracted, complex, self-absorbed, anxiety-burdened, and dangerous.  It is not all bad.  On the positive side, teen pregnancies and abortions have declined in recent decades, the percentage of youth starting and finishing college has increased, and youth as a whole are less prejudiced against people of other races and ethnicities than earlier generations.

Individualistic in their moral reasoning, focused on material comfort, frequent abusers of alcohol and drugs, disposed to temporary sexual relationships, and civically disengaged—that, without the nuances, is the picture of most (not all) emerging American adults that Smith gives us.

I am not generally a "sky is falling" sort of person but I think the book chronicles the very stuff that most of us have already presumed and surmised from anecdotal evidence and personal observation.  The point is that the change is not without its consequences -- especially bad change.  The consequence for the Church mean that our youth have less in common with their for bearers than we thought and that what religious and moral foundation we provide for them may give them what few ties they do have to generations past.  This is important for so many reasons -- and not just for the future of the faith -- but for the very health and life of those young people.  The bad news in this study chronicles the descent into bad behaviors that can steal away their very lives from those captive to the culture and to the often poor parenting choices we have made for them.  I am not about to blame the young people for all of this -- the bulk of the responsibility goes to people of my generation, to economic and social changes they inherited as well as participated in, and a scientific viewpoint which detaches truth and morality from choices and feelings.

I have not read the book yet but it seems an important work that does more than wave the red flag.  I know that David Brooks in the NYTimes has made this a subject of a couple of columns and I expect we will be hearing more...   What do you think?
Posted by Pastor Peters at 6:00 AM

I, too am depressed by the post-modern disease. Two things give me hope.

1. The linear nature of divine history: History for the Christian is linear. Christ has been coming since the Fall. He came. He is coming in Judgment. These events for God are the line around which all human history spirals.

2. The spiral nature of human history: Human history is in constant flux. We spiral around the divine linear like stripes on a barber pole. We buzz around what God has and will do like bees around a hive.

Post-modernity is not sustainable. Saying you do not believe in absolute truth is a statement of absolute truth. You cannot believe you are the maker of truth and continue NOT walking in front of buses or off tall buildings.


These two things give me hope. Not because humans are smart enough to figure out their own mistakes, but because the solid, stable truth of God's History forces us to come back to it (and ourselves, like the prodigal).

I have not read the book but the summary misses a few things that I am seeing among young people.

2) While there are a number who have delayed adulthood there are also a very large minority of young people who essentially "raised their parents." These kids were born into very unstable homes where drugs, alcohol and sexual behavior were very permissive. As a result, these kids became the stabilizing factor in their homes at a very young age. These young people are looking for something solid in their lives they did not receive from their parents and are beginning to turn to the Church to find it.

3) It is true that many of these young people tend to be individualistic in their moral reasoning. However, when you talk to them, you find that it is often because they have witnessed the Church pointing out the sins of society without actually providing the Gospel. Their experience with the church tends to through legalistic para-church organizations such as focus on the family. As such, they have really been exposed to m oral activism rather than biblically founded doctrine and their reaction against moral absolutes is largely a reaction against legalism.

Many of us older folks look at the problems of today’s world, and particularly at those of our own country, and we do not recognize that since our youth, both the world and our country have changed. Obviously it has changed in concrete ways, but I am referring to the fact that the values of society have changed. Nevertheless, we still try to solve today’s problems as if the world’s values had not changed. Change takes place all the time; it cannot be stopped. But what we are concerned about is the nature, or direction of the change. J. R. W. Stott had an interesting quote in “Baptism and Fullness. The Work of the Holy Spirit today” in which he said words to the effect that “The West has lost the faith, and is therefore loosing its values.”

As Lutherans we know that values follow faith. That’s what Repentance means. But we also know that the Gospel has a role to play in the process in which our Lord gives us faith. Therefore, I conclude that when we look at these unhealthy changes we see taking place in our society, our first concern should be whether the Gospel is being proclaimed among us as it should be. It may sound preposterous at first sight, but I maintain that if the Gospel had been proclaimed properly, neither Soviet Communism nor German Nazism would have happened.


Good. They are the victims

" the bulk of the responsibility goes to people of my generation, to economic and social changes they inherited as well as participated in, and a scientific viewpoint which detaches truth and morality from choices and feelings."

In the 20th century, young kids in their teens and early twenties would gradually abandon reckless party behavior in favor of establishing family, career, and a life with the church. The transition was expected, and it did occur with most kids as they grew older.

In the 21st century, most kids don't care about pursuing those things. They prefer to remain emotionally stuck as teenagers, do drugs, and to hang out with their friends. Sponging off mom and dad as long as possible with no strings attached is encouraged. Church is irrelevant to them. The future does not matter. The moment is all that matters. How would you explain this new mindset?