From the beginning of about the 3rd century there is evidence in the West for some four minor orders in the Church (acolytes, exorcists, doorkeepers and readers). In addition, mention is made of cantors and, as odd as it sounds,  fossores (tomb diggers!). Of these, the overwhelming evidence favors the office of reader as the earliest. There is also evidence that, at least in the West, there was some sort of investiture rite, sometimes called an ordination, in which hands were laid and the individuals were given the instruments of their offices.  It must be said, however, that none of these offices were seen as part of or similar to the the major order of deacon or the highest order of priest and bishop.  It was clearly held that none of these minor orders originated with Jesus or the apostles.  This is likely the structure Luther would have known.  See the chart below. 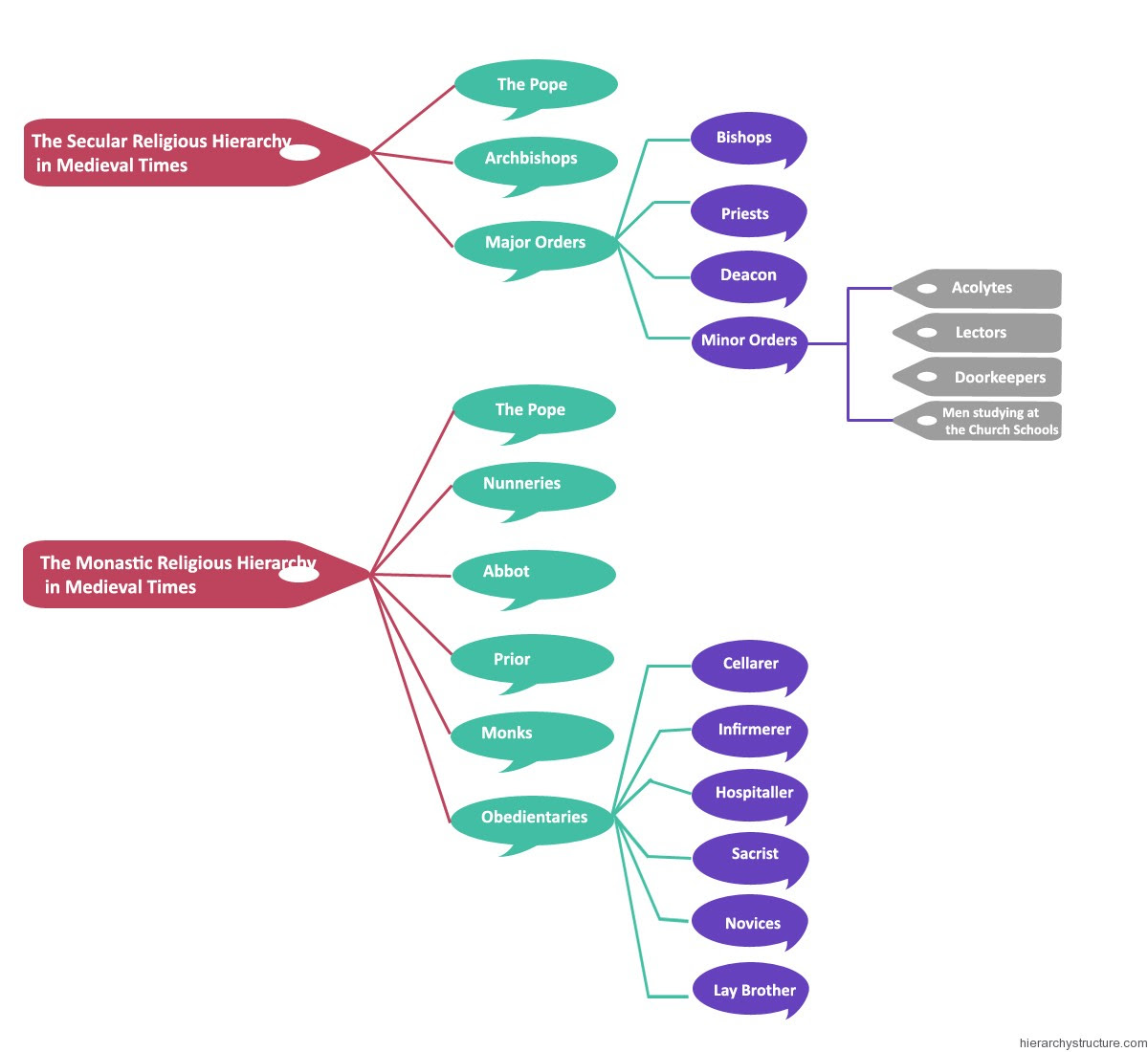 This hierarchy is explained below in descending order. Take a look:

This hierarchy is also described below in a systematic descending order. Have a look –
But in both the hierarchies, every one of these above people, from Pope to doorkeeper, were required to have their hair of head shorn in the Roman tonsure. This was done in a systematic manner. The crown of the head was completely shaved while leaving a small ring of hair unshaved around the head. But nuns normally had their hair cut very petite under their covering.

As to the liturgical functions attached to the various minor orders, they are really but a participation, originally rather indefinite, in the liturgical ministry formerly administered entirely by deacons. This explains why minor orders differ in the Latin Church and in the various Eastern Churches.  This earlier discipline, however, no longer reflects modern custom and law.  In 1972, Pope Paul VI replaced the term "minor orders" with that of "ministries". Two of what were called minor orders, the reader and acolyte, were kept though national episcopal conferences were free to use the term "subdeacon" in place of that of "acolyte".  Candidates for the diaconate and for priesthood were required to have received both ministries and exercise them for some time before receiving holy orders.

Okay, my point in this rather long post.  After the Reformation, we forgot all about these minor orders or ministries.  Maybe it is time for us to reconsider.  No, I am not advocating for changing the Lutheran history of one ordination to one office, the office of pastor, nor am I advocating that we willy nilly jump in and begin it all anew.  What I am suggesting is that we can create and define offices, not really clergy but not really lay, to fulfill specific functions, not to compete with the Office of the Pastor, not to substitute for the Pastor, and not responsible for those things for which only a Pastor is authorized.  Perhaps the issues of lay assistants at the altar, lay readers, etc., could best be solved with such ecclesiastical offices, endowed with limited authority and responsibility, requiring adequate training and preparation, and conferred in some churchly way (a consecration with the symbols of that responsibility, for example).  Okay, lets get talking. . .
Posted by Pastor Peters at 6:00 AM

You forgot subdeacons, possibly the oldest, alongside readers, of the "minor orders." In the East, subdeacons have always been considered a "minor order," but in the West the idea grew up in the course of the Middle Ages, and had become the predominant opinion by its end, that the three "major orders" were subdeacon, deacon, and priest, with bishops being "priests with jurisdiction" that ordinary priests lacked - or, alternatively, that priests and bishops were precisely the same order, with priests forbidden to exercise functions (e.g., ordination) that all "priests" were equally competent to perform. Lutheranism simply "ran with" this medieval view, taking it to its logical conclusion (ordination in the Scandinavian Lutheran churches was never [in Denmark and Norway] or only at a later date [in Sweden, 1786; in Finland, 2002] restricted to bishops, who could and did delegate the performance of ordinations to Cathedral Deans or Theology Professors); in the Scandinavian Lutheran churches bishops could conduct ordinations as soon as they were appointed to their positions, that is, even before their "episcopal consecrations," quite unlike English Anglican bishops).

This was so disputatious a subject in the Catholic Church that the Council of Trent avoided pronouncing on the nature of the distinction between priests and bishops, even though it came up at various times at that council.

"Historically, it appears to be a 20th century phenomenon ..."

I'm not entirely sure of this. I have the impression that in both the West and the East in houses of women religious some women - the abbess or a "deaconess" (where "deaconesses" existed and where the title was not simply one given to the abbess) could read the lessons (at least at the Hours [even readings from the gospels], but maybe not at Mass/Liturgy [certainly not the Gospel reading]). But that aside, it does seem to be "a 20th century phenomenon."

Actually, I left off the subdeacon on purpose. What to do with it? Like the East consider it another minor order or like the West consider it part of the deaconal order, as if it had stages or distinct levels. I could not decide for myself where or how to deal with it so I left it out. Personally, the use of a subdeacon is rather unusual in Lutheran settings so it seemed an easier solution to omit it from my post rather than try to unravel something I was unsure about. Also, the point of it all was less to deal with each specific office or order, minor or not, but to see how some of our modern day discussion about "lay" readers, communion assistants, acolytes, etc., is really a discussion about the vacuum created by omitting orders with rather narrow responsibility and leaving it wide open, at least in Lutheranism.

Dr. Tighe, in the history of Lutheranism, we did indeed have the choir boys sometime read in the office; but never, I think, at the Mass.

This post by Father Peters is a good example of Majoring in Minors.
Who cares what the Middle Ages Roman Catholic Church was doing with
acolytes? In the 21st century women lectors are not forbidden in
Holy Scriptures. It is adiaphoria and this means the local parish
can decide whether to use the gifts of women in reading the lessons.

Pastor Peters feel free to comment and provide instruction. I think the LCMS has a book in print "Women Pastors?" The book disagrees with Anonymous. I will look for your comments if you have time. I know it's Saturday morning in the great state of TN, and you might not have time seeing as you're working tomorrow. Our Lord bless your good works and ministry.