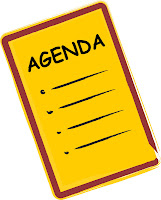 Recently I read some some words from those who were concerned that Pastors came into congregations with an "agenda." This was seen as something bad. Pastors should have no agenda but just serve their people. Well... yes and no...

I have an agenda. It is probably not the one people think I have but I will admit to having one. Usually folks think that Pastors all want to run the church and make everything go their way. Some do. Sometimes I do. But my agenda is not something personal. My agenda is not something I have honed or forged. My agenda is is to proclaim the Word in season and out of season. My agenda is to administer the Sacraments in accordance with Christ's institution. My agenda is to shape this congregation not by majority vote or autocratic rule but by the confessional standard in our constitution -- the Evangelical Confessions of the Lutheran Church as contained in the Book of Concord.

Because for too long Lutherans have forgotten who they are in those confessions, much of what I teach and do sounds like a foreign agenda to some folks. They interpret as a personal agenda of Larry Peters such things as a weekly celebration of the Lord's Supper, the rich use of music from all styles and eras, the incorporation of a rich ceremonial life within the liturgy, an outward identity as a evangelical catholic community, and a vibrant presence in the community as an agency of God's giving love and compassionate care. They do not belong to me. They belong to our identity as an Evangelical Lutheran congregation. My agenda is to help us to be true to who we are by knowing that confession, seeing it flow from Scripture, identifying it in the great tradition of the Church dating back to the early fathers, and by living within this confession and faith in a positive and unapologetic way.

When we built our building, I listened to the congregation (though I think it is a wonderful building, it does not reflect my personal taste nor should it). When it comes to assembling a staff of people to help God's people fulfill their calling, I am well aware that none of them work for "me" but for the "Church." It is not my role to interfere or to make them do things my way but to provide a setting where they work with each other, with the congregation, and with me as effective partners toward this high calling as an evangelical Lutheran congregation living out her confession in worship, witness, and service. When it comes to a budget, the priorities that budget reveals are not to be my pet projects but the faithful, financial support of our confessional identity as Lutheran Christians assembled around the Word and Table of the Lord to accomplish His will and purpose with the gifts and resources He has provided to us.

Without an agenda, a Pastor is left to please the people. While they might like to have a Pastor who does that, such a Pastor will leave them weak, vulnerable, and distracted from their identity as a child of God by baptism and faith and from their vocation to love Him, serve Him, thank Him, and walk in His ways.

An agenda... yes I have one... but it is not a personal agenda. It is the calling into which I was baptized with you, into which I was confirmed as you were, into which I was ordained to serve you, and by which we will both be held accountable... today to the larger Church and in eternity to the Lord whose name we bear, whose faith we confess, and whose grace in which we stand.
Posted by Pastor Peters at 9:58 AM

Well said, brother. May this be the agenda for all of us called and ordained servants of the Word.