Are you lutheran, Lutheran or LUTHERAN? 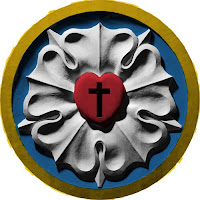 The lutherans within a congregation are the folks who do not attend. They have their names on a membership roll and may or may not be contacted about this, informed of the need to be regular at the Lord's House and Table, or may just be allowed to hang on in this tenuous thread of a connection for, well, ever. These can sometimes be the people who insist that they know more than others what is Lutheran and what is not, and usually, what is going on in the Church today is not their idea of Lutheran. They were once active (some back to their confirmation day and others active until more recently in their lives) but something happened -- no, not the big thing that made them mad and turned staying at home into a protest. Most of these gradually dropped out -- over time -- growing out of the habit of church attendance. These are often the ones who are least informed of what it means to be Lutheran, have an identity of being Lutheran but one that sits on the outside of their lives and does not affect who they are or what they do today, and whose ideology tends to be conservative but is less rooted in Confessions and Scripture than in "that is the way it was when I grew up..."

The Lutherans are those who attend, but irregularly. These are not just Christmas and Easter folks (though some of them are and they will even tell the Pastor at the door, "See you at Easter" or "See you at Christmas"). But that is generally not the only time you see them. They will always be there at baptisms, confirmations, weddings, and funerals. They are friendly and genuinely like the Church. They may even get the Lutheran Witness. They intend to be active and usually see themselves as being active. They seldom realize how long it goes between times when they show up. They know a lot of the folks in the pews. They know the congregation and her history. They have a good idea about what Lutherans believe and teach, less so an idea of what Scripture says. They are informed about the big things but less so little things (both theologically and in terms of what is going on in the congregation), their identity is deeply rooted both in Lutheranism and in the congregation but less so in the weekly gathering around the Word and Table of the Lord, and their ideology tends to be moderate on just about everything (having learned well from St. Paul moderation is a good thing).

Then there are the LUTHERANS who are there most Sundays -- in fact, when they are gone, everyone notices and wonders where so and so are today. These are the folks who sit in the pews week after week, who attend meetings, who volunteer for work days, who teach Sunday school, who sit on Council, who read their newsletter, and who are concerned about the long term future of the congregation and the Synod. Many of these are old time families who have a deep history within the congregation and a deep affinity for things Lutheran. They drink their Lutheran coffee from Lutheran mugs. But many of them are new to Lutheranism -- some having come from churches where the Gospel was not clearly proclaimed and where feelings replaced the Sacraments as means of grace. They have come through the journey looking for and finding a home where the liturgical life is rich, the music is the handmaiden to the Word, the Eucharist is central, the Scriptures are believed and preached, and life flows from and back to the altar (in every program from preschool to evangelism to catechesis to pot lucks). These are the folks who give extra toward the family in need (generally without anyone else noticing) or make sure that little missions are faithfully supported with the big mission (Synod and District). They know the Pastor well, may not always agree with him, but who know how to disagree without conflict and who try, in every way possible to find common ground on most all issues. They are rooted in the past but look for the best of what which comes from today (in music of the liturgy, liturgy itself, and hymnody). If they go to a Lutheran parish with a praise band and only a preaching service, they will participate respectfully but on their way home thank God they have their own congregation to return to. The bring back to the Pastor the bulletins from other churches when they are away from home. They stand at the doorways and greet people (strangers from off the street or strangers to them from among the lutherans and Lutherans listed above). They are informed Lutherans and know what the different acronyms mean, they are Lutheran in identity and informed choice, and their idealogy is based on the Confessions (or as much as they know of them from Bible studies and the Catechism).

Sure you can divide up the folks differently and I claim no infallibility on this division. And I say this not to judge. I love them all. I see many of the lutherans in the community (from soccer to little league to Wal-Mart) and I think most of them want to be LUTHERANS -- and some of them return, often by-passing the Lutheran stage entirely. It is the grace of God at work and the Holy Spirit warming them up -- and a joy for me to experience as their Pastor. I think that most of the Lutherans also want to be LUTHERANS but they have gotten caught up in other things (soccer, little league, the lake house, bad habits, etc.). I know that if they were really needed, they would be there but they see the Church as a fire extinguisher for emergencies and they would be the fire extinguisher in case the Church had a desperate need. I must admit that I spend much of my time with the LUTHERANS, or trying to bring the lutherans and Lutherans to this level of information, identity, and ideology. The LUTHERANS are delighted that I spend much of my time also with new people -- though the lutherans and Lutherans are not so sure why I seem more interested in new people than them -- and sometimes they take it personally even though they genuinely want their church to grow and prosper in size and ministry.

So, on any given Sunday morning we have 72% of the congregation drawn from the LUTHERANS, 20% drawn from the Lutherans, 7% new folks who walk through the door for the first time and other newer folks, and 1% lutherans... my percentages may be off a bit...

Now you see the people from the other side of the pulpit...
Posted by Pastor Peters at 7:07 AM

Last Sunday my pastor said in his sermon that some think church services should be made 'familiar and comfortable' in order to attract those who only occasionally attend. In that case, he remarked, we should have poinsettias and lilies displayed every Sunday.

The LUTHERANS were the ones who chuckled.

Pastor,
A light hearted but quite accurate way to let us know about ourselves. A view from the other side of the pulpit without all the responsibility was refreshing.

You've inspired me to modify my usual: Everyone wants to be a LUTHERAN...they just don't know it yet. :)

Pastor may the 72% understand your mininstry and follow your example.

The LUTHERAN Church does embody the living Christ when the poor are among us. When the Church is no longer a church for the poor, it loses its spiritual identity.

Pastor this made me realize exactly why I liked Grace from the first time I walked through the doors a few weeks ago. Not to mention it is not like other Lutheran Churches that now use this modern technology called powerpoint. I do not feel there is anything LUTHERAN about powerpoint aside from if it was used to accomodate the elderly in worship services but then at the sametime that would eliminate the LUTHERAN stereotype that I grew up with of the old LUTHERAN man or woman who has went to church all their lives and has half the hymnal memorized but still insists on holding it up even though they can barely read it or not read it at all. Powerpoint takes away from tradition.

Excellent observation and division, Pastor. And for barbara_ann_2004, I totally agree about the power point thing. I like to read from the hymnal and look up at the altar and crucifix, not up to some big, bright, glaring screen that diverts all attention. The longer I'm alive, the more I see the immense value of tradition. I'm thinking of the song from The Fiddler on the Roof....TRADITION! TRADITION!