The Nerve of Some People 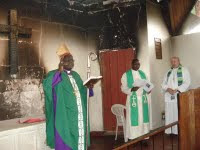 In days gone by when little children heard stories of the mission fields from the missionaries who told their story at Mission Festival (the hottest day of the summer, two services divided by a sumptuous meal or all day at church), we fancied up images of deepest darkest wherever, of half naked pagans only hours away from their last missionary as a meal, heads shrinking in the vat of magic fluid, and spears or little darts marked with terrible poison.... well, I digress...

My point is that at one point in time the civilized, Christian society saw the heathen in these far away continents as the ones who needed to hear what we needed to tell. Generations of missionaries and mission work went forth from America and Europe, too. Like children who are to be seen but not heard, we were not interested in what these people had to say, only that they would listen to us. And listen they did.

They listened and they told others around them what they heard, until the numbers of Christians exploded. The once familiar image of a Lutheran as tall, blond haired, blue eyed, and fair skinned is soon to be replaced by dark skin, dark eyes, and tastes that definitely do not run to sauerkraut and lutefisk. They listened and they believed the Word that was told to them. They took to heart the teaching and they ordered their churches with churchly offices like Bishop. They manifested the heart of Jesus in care for those no one cared for and set up orphanages and schools and hospitals. They learned how to think with the Christian mind and approached issues and problems as we had taught them through the light of God's Word.

Now they speak back to us what we taught them -- but most of us do not want to listen. To a secular Europe from whom missionaries once came, they speak of re-evangelizing Europe and call for faith to be born again among the very people who helped give it birth in Africa and Asia. To a liberal and doubting European Christianity, they speak of revitalizing church attendance, of Bible study, of reintegrating Scripture into their world view now dominated by raw scientific truth and humanistic expression. To a culture inebriated with sensuality and in search of license for their excess, they speak of morality and of self-control, of responsibility and accountability.

Now they speak back to us what we taught them -- but most of us do not want to listen. To an America still in love with consumerism, they call for equity and justice, for raising up the cause of the poor and needy before self, of loving neighbor enough to give up privilege. To an America so enamored with the individual, with individual freedoms and choice, they speak community and order, of relationship and responsibility. To an America where truth is personal and personally defined, they speak objective truth in the Word that is yesterday, today, and forever the same. To an America in which sexuality dominates nearly everything, they speak of modesty and decency, of morality that does not change, of chastity outside of marriage and of marriage that is man and woman.

Now they speak back to us what we taught them -- but most of us do not want to listen. When the come to visit us they bring mitres and copes and staffs and we stand there in our polos and khakis and sandals, texting while they talk and tweeting while they pray. They bring up our ancient creeds and our Confessions but we are more interested in technology and cutting edge ministry, in powerpoints than needlepoints, of music that flows from our tastes instead of music that serves the Word and speaks the Gospel. They are liturgical without being formalistic and we are formalistic in our anti-liturgical desire.

I am thankful for those Anglicans in Africa and Asia who may be the hope for Anglicanism if the children of those who sent those missionaries will listen to the children who came to faith because of those missionaries... I am thankful for those Methodists in Asia and Africa whose very numbers have become an anchor upon the deathward drift of Methodism into the oblivion of a crossless Christ and a Christless hope... I am thankful for those Lutherans in Africa and Asia who have the nerve to tell the ELCA they were wrong to adopt and embrace homosexuality and who have the nerve to tell the LCMS that they need to make friends and come to the Table of the Lord with people throughout the world who share their faith but look and sound different.

I am thankful for those faithful missionaries who learned no new paradigms but proclaimed the cross and empty tomb in word and action, believing that this Word is efficacious and God will bring to fruition the seeds they sowed. I am thankful for the hearts of my grandparents and parents who listened to those missionaries at those Mission Festivals and who raised one day offerings of sacrificial giving to make sure their work went on. I am thankful for those children who were born on the mission fields and still chose church work vocations because their heroes were their parents and the noblest task the work they did to bring Christ to the nations.

I am thankful for the nerve of those, many still dependent upon our dime, to speak to us words we may not want to hear but must... and I pray that we will listen... in Europe, in Scandanavia, in Lutherland of Germany, in Canada, and in America. Lord, help us to hear from them the Word we once taught them...

O Spirit, who didst once restore
Thy Church that (she) it may be again
The bringer of good news to men
Breathe on thy cloven Church once more,
That in these gray and latter days
There may be men whose life is praise,
Each life a high doxology
To Father, Son, and unto thee. Amen

Posted by Pastor Peters at 6:29 AM