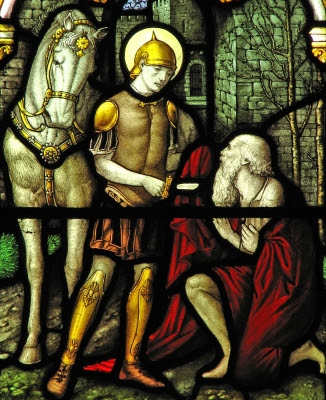 Let me borrow what Paul McCain has up on his blog about blessed Martin of Tours:

Born into a pagan family in what is now Hungary around the year A.D. 316, Martin grew up in Lombardy (Italy). Coming to the Christian faith as a young person, he began a career in the Roman army. But sensing a call to a church vocation, Martin left the military and became a monk, affirming that he was “Christ’s soldier.” Eventually, Martin was named bishop of Tours in western Gaul (France). He is remembered for his simple lifestyle and his determination to share the Gospel throughout rural Gaul. Incidentally, on St. Martin’s Day in 1483, the one-day-old son of Hans and Margarette Luther was baptized and given the name “Martin” Luther. The following is an extended biographical sketch:

Born at Sabaria (today Steinamanger in German, or Szombathely in Hungarian), Pannonia (Hungary), about 316; died at Candes, Touraine, most probably in 397. In his early years, when his father, a military tribune, was transferred to Pavia in Italy, Martin accompanied him thither, and when he reached adolescence was, in accordance with the recruiting laws enrolled in the Roman army. Touched by grace at an early age, he was from the first attracted towards Christianity, which had been in favour in the camps since the conversion of Emperor Constantine. His regiment was soon sent to Amiens in Gaul, and this town became the scene of the celebrated legend of the cloak. At the gates of the city, one very cold day, Martin met a shivering and half-naked beggar. Moved with compassion, he divided his coat into two parts and gave one to the poor man. The part kept by himself became the famous relic preserved in the oratory of the Frankish kings under the name of “St. Martin’s cloak”. Martin, who was still only a catechumen, soon received baptism, and was a little later finally freed from military service at Worms on the Rhine. As soon as he was free, he hastened to set out to Poitiers to enroll himself among the disciples of St. Hilary, the wise and pious bishop whose reputation as a theologian was already passing beyond the frontiers of Gaul. Desiring, however, to see his parents again, he returned to Lombardy across the Alps. The inhabitants of this region, infested with Arianism, were bitterly hostile towards Catholicism, so that Martin, who did not conceal his faith, was very badly treated by order of Bishop Auxentius of Milan, the leader of the heretical sect in Italy. Martin was very desirous of returning to Gaul, but, learning that the Arians troubled that country also and had even succeeded in exiling Hilary to the Orient, he decided to seek shelter on the island of Gallinaria (now Isola d’Albenga) in the middle of the Tyrrhenian Sea.

On Nov. 11, which is both Veterans Day, as well as St. Martin of Tours Day, the Lutheran Church Missouri Synod presents the silver St. Martin of Tours medal to those who have honored our church and our nation by their military service. The award is based on the legend of St. Martin, a fourth century bishop of Tours, France. As a Roman soldier, Martin was converted after sharing his officer's cape with a beggar and later dreaming the beggar was Jesus. Lutherans also remember St. Martin's Day as the date of Luther's baptism in 1483, resulting in his Christian name, Martin.

Posted by Pastor Peters at 7:54 AM