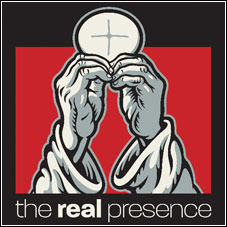 While explaining the Lutheran confession of Christ's presence in the Sacrament of the Altar (generally called the Real Presence), one prospective Lutheran asked me, "How real is real?"  His question sparked a spirited discussion among the people present.  At first I let the others comment to see where folks came down on this.  Some were clearly speaking of only a vague and spiritualized presence in which Christ was clearly not present in the eating and drinking but in the heart and mind.  They were pious enough and very reverential but real did not mean corporeal and the presence of Christ in the bread and wine was mostly absence (not physical or tangible).  Others spoke real presence and affirmed that Christ was there in the bread and wine but not in the same way that we were there in our physical presence -- because we could be seen and touched and smelled and you did not see nor touch nor smell the body and blood of Christ.  Others simply let the words of Christ mean what they say:  Christ is there in and with the bread and wine, His flesh and blood present on the altar, distributed and given out by the hand of the Pastor, received, eaten and drunk by the communicant.

In desperation for a more concrete (real?) answer, the questioner put it this way.  "Is Christ's body and blood present in such a way that it would give a vegetarian pause?"  Now that is "real," isn't it.  He was not trying to get an answer to an impossible, philosophical query but simply trying to nail down the real part of the real presence.  I admit to thinking a bit before proceeding.  In the end I fudged it.  Since vegetarians are concerned with earthly foods (the visible element or part of this sacrament), no, the vegetarian need not be troubled.  But I tried to pick it back up by saying again that the object of the sacrament is not to explain it or to make sense of it.  It is as much as mystery to us how Christ is present in bread and wine as it is that Christ the fully divine Son of God took on mortal flesh from the Virgin Mary and was born a man.  We may attach some statements to the fringes of this mystery in order to deflect those who define it wrongly but we do not unpack the mystery to crack the riddle of how He does it or even how it can be at all.

In, with and under...  Transubstantiation...  They are merely words we struggle to use in an attempt to define the mystery that refuses to be defined.  Christ is there.  Not some spiritualized Christ but the same Lord who was born of Mary, suffered and died on the cross, and rose on the third day.  He is there as His Word says and promises and effects.  His flesh is real food and His blood is real drink.  It is there on the altar, take up in the hand of the Pastor, given and distributed to the communicant at the rail, and received by the faithful who discern the mystery by faith and confess it simply with the "Amen" to what Christ in His Word has said.


Nothing we do affects or effects that presence.  It is solely the work of Christ, whose Word accomplishes its purpose, working through the individual voice of the Pastor speaking that Word over bread and wine.  Our faith does not make it Christ's body and blood and neither does our unbelief prevent that Word from bestowing what it promises within the context of the faithful gathered at His bidding to receive what He has promised.  Real presence people do not receive one thing at the altar the symbolism folks another.  Regardless of what we believe, think or feel, it is what Christ says it is:  My body given for you and My blood shed for you -- for the forgiveness of your sins.

In the LC, Luther says that it is bread "comprehended in (by) God's Word."  In other words, it is bread which God has marked and claimed for His sacramental use and those who comprehend it in/by God's Word (that is faith) see what earthly eyes do not see.  Sacraments are not hocus pocus magic or slight of hand but the element connected to and used by God and His Word to do what He has promised them to do.  We do not make it work by our believing any more than we can prevent it from working by our unbelief.

To eat worthily means simply to eat with faith, trusting that this bread is Christ's body and this cup His blood as He says and promises by His Word.  To eat unworthily means to come without such faith to recognize, discern, or receive what God offers there.  The sacrament remains the sacrament but the unworthy have no means of receiving its grace.

I sometimes live in fear of what people in the pew actually believe about the real part of the Real Presence.  I know enough of what people claim to have been taught that this mystery is not lost only on the laity but confuses and confounds the clergy as well.  Yet, in the end, Lutherans resist the great temptation to explain the mystery and more or less are content to confess it.  No small amount of damage is done to our cause by our flawed attempts to explain it (such as the foolish pursuit of an expiration date on the presence of Christ in the bread and wine).  The idea that apart from the use there is no sacrament is not meant to place a time limit on Christ's presence but to insist that Christ is present there primarily to be received -- to be eaten and drunk in faith by the faithful.  While we may and should adore Him in the Sacrament (as we do during the Agnus Dei), this adoration is within the context of His intended use and not a substitute for that use (communing).  This was the Lutheran beef and not the issue of whether or not Jesus simply drifts away from the bread and wine after the service is over (as if the Sacrament is over when the "Amen" to the benediction is spoken and the Divine Service itself is over).

I have read a few thoughts about this on several blogs and forums of late and it seems that the issue of how "real" is the presence of Christ in the Sacrament of the Altar remains an urgent issue for Lutherans.... still...
Posted by Pastor Peters at 6:17 AM

Laity or Clergy, the urge to make everything 'explainable' lives in us. We just can't admit to our inability to answer questions about the mysteries of God.

I believe Luther or the BOC says something, in an attempt to explain this mystery, that Christ's body is there just as soundwaves exist, but we can't see them. Is this accurate, or am I making up memories?