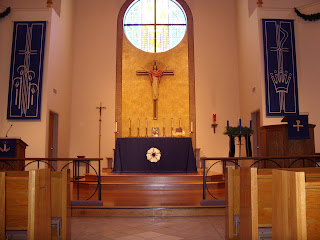 There was much discussion about the color chosen for Advent.  More classically, the purple for Advent distinguished the season from the violet and more penitential season of Lent.  Rose was used for the Third Sunday in Advent.  Then blue got into the mix and some ran and jumped upon the bandwagon and others circled the wagons to complain about this new intrusion into the old tradition.  In addition, the Anglicans had some tradition of using a Lenten array not of purple or of violet but unbleached muslin.  Blue was an old practice of using blue in Advent (the Sarum and Mozarabic (Old Spanish) Rites used it, but they didn't really exist anymore).  In the East, blue is one of the primary liturgical colors (but we are not Orthodox).  Others point to its ancient use in the Church of Sweden.

My point is not to present a long history of the colors here or to insist upon one practice or another.  The colors of the season were not written in Scripture or given to the Church with direct revelation to one of the Apostles.  The use of color evolved with the major choices laid down between the sixth and twelfth centuries -- with variants in different places.  (Though some wags insist the whole thing is a marketing conspiracy by Almy to get parishes to part with money!).

The color of Advent is a church usage about which differences should not cause problems.  It is precisely this latitude that adiaphora has in mind.  Though some of you might not believe it, I am not very fussy on this point.  It is a point about which people may disagree and this disagreement cause no problems at all.  My first parish used purple.  My present parish uses blue (although a deep indigo blue that distinguishes Advent from the lighter blue usually associated with festivals of the Virgin Mary).

I had a person wonder why we had blue and I have had people wonder why we do not have purple but I have never had a person ask why not the pink of Advent III.  So colors are not set in concrete but are part of the evolving tradition of the church.  There is nothing wrong with this but this is something wrong about insisting that one path or another be the only choice.  Actually, in this day and age, I am happy just to see paraments in use at all (or vestments worn by the clergy!).

Today, in the children's lesson the
DCE told us Blue for Advent was to
signify the royalty of our King.

Last year, the pastor told us that
Blue was to signify the joy of
Advent as opposed to the Purple of
the penitential season of Lent.

I can not wait until next year for
the significance of Blue in Advent
to be explained.

I confess, I had been wondering about Gaudete. I know a lot of ministers don't do it because they don't wear 'pink.' Silly, I know.

I want to see paraments and vestments. I just don't want to see the gray of Sweden... sort of fits with the theology of many, doesn't it?

You mention blue being used by the Orthodox, and that is true, we do use it. But we don't use it during the Nativity Fast (Nov.15th- Dec.24th). We use it during the summer starting with the Dormition Fast (Aug.1st-14th) and then for a period thereafter as well. Right now we are using dark red for the Nativity Fast. This is because the Typicon is kind of vague about the actual liturgical colors. All it says it that the penitential seasons such as Advent and Lent should have "dark colors" and that the festive seasons like Easter should have "bright" colors. That's it. That's the main reason our liturgical colors are not as standardized as the Western colors are. We have a great deal of variety in local usage. I am sure there are some Orthodox somewhere that are using Purple now, since it is also a dark color and is appropriate for a penitential season. Even in the Russian tradition, there are variations in the liturgical colors. There is even a St. Petersburg "use" and a Moscow "use" and the two don't always agree.

You got that right, Anonymous X, all this is just theologising whatever one is doing or prefers.

Blue in fact does not signify royalty, purple does, which is one of two reasons why it is the traditional colour for Western Advent, the other being its connexion with repentance.

These days, "tradition" is whatever from tradition one does not pick and choose from, but not tradition itself. Picking and choosing from various "traditions" is a modern novelty brought on by the "liturgical movement", whose scholars, lacking any usable skills like air conditioning repair, delight in assembling such pastiches.

The fact is, neither colours, nor paraments, nor anything about the liturgy at all is written in Scripture or given to the church with direct revelation to one of the Apostles.

The fact also is, that adiaphora, which is not a Christian concept but borrowed from the Stoics, allows for variation between traditions, but creating pastiches in the present day from various traditions is no tradition at all and violates both adiaphora and the various traditions, just another dressing up and playing church according to what one likes.

Picking and choosing from traditions has been what the church has been doing since the beginning - until medievalism and Roman authority reigned it all in. But this did not happen until a few hundred years before the reformation.

Blue paraments came about because we Lutherans saw them in a Gaspard, or Almy catalog and thought it was a pretty color for Advent. As lame and vain as that may sound its probably better and more honest than justifying one's personal preferences via the feasts of the Theotokos from the Byzantine rite.
Rose has been a part of the rubrics of the post 1969 roman rite. But it is differentiated from pink, which is sometimes used in lesser festivals, but as I understand it is not an accepted liturgical color in the canon. For Lutherans rose is the color for the candle on the advent wreath lighted on Gaudete, (though I have seen it lighted on the 4th Sunday of Advent as well) and as far as I know has never been considered a liturgical color per se, in which we have vestments and paraments in that color. But I suppose if you can arbitrarily decide to have blue for advent you can have pink paraments on Gaudete if you want. Maybe someone will come up with a nice tartan chausible for the feast of St. Andrew.

Just a note on the pink/rose thing: Nobody, even the preconciliar Romans, think it is mandatory. It is permitted but not mandated. Violet is fine if the parish does not have rose, which it may not due to financial considerations.

Funny thing in this is that Roman Catholics don't use paraments at all anymored. The only color is in the vestments. Lutherans and Episcopalians are the only ones who generally dress the altar.

Quote: Blue paraments came about because we Lutherans saw them in a Gaspard, or Almy catalog and thought it was a pretty color for Advent.

So what about the Swedish tradition? They had blue before there was a Gaspard or Almy. Do we discard this tradition because of the condition of the Swedish Church today?