In a post on Reformation Day, former Lutheran and now Roman Catholic priest Fr. Longnecker posted the picture below with the two brief comments: 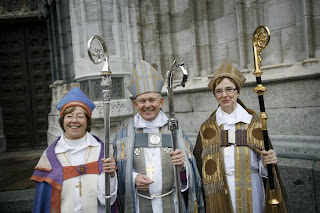 In celebration of Reformation Day I thought readers might like this photograph of the heirs of Luther:

That would be Lutheran bishop of Stockholm Eva Brunne on the left. Eva is in a 'registered and blessed' homosexual partnership. She and her 'partner' have a child conceived through artificial insemination.

I remember how in seminary I was forced, over my objections and with realistic threats of expulsion from the faculty, to go to a Lutheran church on reformation and sing as part of a choir “A mighty fortress is our God”.

The people in the photo and others whom we might append to the little joke of Fr. Longnecker are a scandal to Lutherans and a scandal to orthodox Christianity as a whole.  We all know that dressing up as a bishop does not make one a bishop. FWIW these Lutherans are the closest to Roman apostolic succession among Lutherans but it shows that Confessions without enforcement and bishops without teaching authority of the Confessions are empty and meaningless.

As far as Fr. Zuhlsdorf's painful admission of the ultimate cruelty of having to sing "A Mighty Fortress" in a Lutheran Church on Reformation Day, let me just say this.  Half of the hymnal Gather and much of the content of other Roman Catholic hymnals and missalettes is so vacuous and empty that I would think it a cause for celebration to sing words that confess the true faith (whether the singer is Roman Catholic or Lutheran).  We sing the words of countless Roman Catholic authors because of what the words say (or do not say) so it will not kill him to sing catholic words from the pen of Martin Luther.  I am thinking about sending him a box of tissues, however, as a gesture of kindness.
Posted by Pastor Peters at 5:30 AM

Well Judas H Priest OSB, when I graduated from a Benedictine university the recessional at graduation Mass was "A Mighty Fortress Is Our God".

As to the Halloween picture -- which is what it truly is, not Reformation -- sure shows how to get out of our problems in LCMS we gotta dump the congregational polity for episcopal polity, and have that "historic episcopate" as the authority that keeps us on the right track, huh!!

Father Longenecker was raised as an evangelical, not a Lutheran, became Anglican and from there went to Rome.

Whatever apostolic succession Swedish Lutherans had has long been lost since they broke communion with Rome and now ordain women and gays.

should correct that to bless openly gay partnerships.

I believe that Longnecker claims to have once been Lutheran...

"Fr. Dwight Longenecker is an American who has spent most of his life living and working in England. Fr Dwight was brought up in an Evangelical home in Pennsylvania. After graduating from the fundamentalist Bob Jones University with a degree in Speech and English, he went to study theology at Oxford University. He was eventually ordained as an Anglican priest and served as a curate, a school chaplain in Cambridge and a country parson.

Realizing that he and the Anglican Church were on divergent paths, in 1995 Fr. Dwight and his family were received into the Catholic Church."

Perhaps you are thinking of Marcus Grodi, the former Presbyterian/Lutheran pastor.

My response to Fr. Longnecker and Fr. Zuhlsdorf is 'do you really want to go there?' A Catholic priest pointing fingers at a sexually debauched sector of Lutheranism? Apparently they do not have anyone in their families, or know of anyone who has been molested by a priest and the long term harm it does. Physician, heal thyself.

A Reformation Hymn Written in 1883 by Pastor C.J. Rehn

Let Luther's heirs come forth this day,
With hymns of exultation.
A mighty host in vast array
Sound forth this proclamation;
God's Word and Luther's doctrine pure
Shall now, and evermore endure.
Let all the world take notice!

With Luther's spirit, stalwart, bold,
May God our hearts inspire.
Now to his doctrine firmly hold
With strength that will not tire.
God's Word and Luther's doctrine pure
Shall now, and evermore endure.
Rejoice and sing God's praises!

Now seize the moment! Take your place
Within the line of battle.
And this our watchword by God's grace
Amid the foe's vain prattle;
God's Word and Luther's doctrine pure
Shall now and evermore endure.
Our vict'ry is accomplished.

Be not deceived, Oh faithless ones
By empty outward union.
But learn again as Luther's sons
True concord and communion.
God's Word and Luther's doctrine pure
Shall now and evermore endure.
Unite us all as brothers!

Oh blessed day, break forth in light!
And call us to remember
That we confess God's truth aright
And never dare surrender.
God's Word and Luther's doctrine pure
Shall now and evermore endure.
So sing our song of triumph.

It would appear at least one of the entities appearing under "Anonymous" is RC. Indeed, from an RC perspective, it doesn't matter if ecclesial unions have officers they call bishops or not, since they aren't real bishops anyway.

Not the point. Though it may be hard to tell sometimes from all the Catholic stuff that appears here, this is a Lutheran blog, and my reference was to a position taken by some Lutherans re the problems we have in our synod (another thing which by RC lights isn't a synod at all), namely, than an episcopate, an office of bishop, would be a solution and the historic solution whereas what we sometimes call "congregational polity" is not.

It is over having or not having an episcopal polity, not over whether that episcopate would be valid.

What is it with these female Scandinavian "bishops" that wear their mitres on the backs of their heads? Looks uninformed, sloppy and frumpy. The male bishop in the center of the picture is the only one with the common sense and style to wear it properly.