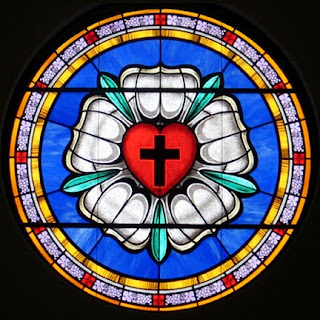 Private Biblical interpretation has weaseled its way in the back door of the house called Lutheran and now most folks in and outside that tradition believe that what drove Luther and what was the fruit of Luther's reform was the principle of private Biblical interpretation.  To read Luther is to know that this was an abomination to him and caused not a little angst at the end of his life.  Luther did not revolt in order to get married and he did not start a revolution so that each of us could look at the Bible and decide for ourselves what it said or taught.

No less than former Lutheran and then Roman Catholic Louis Bouyer suggests that most folks in and outside of Protestantism misunderstand the real principle behind the reformation of Luther.  According to Bouyer, "the true fundamental principle of Protestantism is the gratuitousness of salvation"–sola gratia. He writes, "In the view of Luther, as well as of all those faithful to his essential teaching, man without grace can, strictly speaking, do nothing of the slightest value for salvation. He can neither dispose himself for it, nor work for it in any independent fashion. Even his acceptance of grace is the work of grace. To Luther and his authentic followers, justifying faith . . . is quite certainly, the first and most fundamental grace."

Again, according to Bouyer, the main thrust of the doctrine of sola fide was to affirm that justification was wholly the work of God and to deny any positive human contribution apart from grace. Faith was understood as man's grace-enabled, grace-inspired, grace-completed response to God's saving initiative in Jesus Christ. What the Reformation initially sought to affirm, says Bouyer, was that such a response is purely God's gift to man, with man contributing nothing of his own to receive salvation.

In other words, it isn't as if God does his part and man cooperates by doing his part, even if that part is minuscule. The Reformation insisted that God does his part, which includes enabling and moving man to receive salvation in Christ. Man's "part" is to believe, properly understood, but faith too is the work of God, so man contributes nothing positively of his own.  Bouyer has a better handle on Lutheranism than many Lutherans.

What is even more remarkable is that many look at the Roman Catholic Church today and assume that Luther's reforms actually took -- only it required about 400 years or so to get them in place.  The mass in the vernacular, the Bible translated into the language of the people, the use of hymns, etc. are often seen as the evidence that what Luther wanted was mostly obtained -- except for the infallibility of the Pope.  Except that Luther did not expect that the vernacular would displace Latin as the language of worship, nor was the Bible in the language of the people all that relevant at a time when most could not read.  Hymns had always been there but mostly sung by choirs by the time of Luther.


Lutherans, Roman Catholics, and Protestants alike often fail to see what was Luther's main point -- justification by grace through faith alone.  It might shock some Lutherans, Roman Catholics, and Protestants that Luther was prepared to jettison all other complaints if the bishops would allow the Gospel to be preached in its truth and purity.  In this way Luther pointed to the material principle of the Reformation -- justification by grace through faith alone.  Sadly, some Lutherans and not a few Protestants have left this in the dust in their pursuit of a religion which bears little resemblance to Luther's faith and has little in common with the one, holy, catholic and apostolic church of the creed.  And all because of that right of private Biblical interpretation which allows the individual not only to decide which truth is true but to define that truth -- even invent it.  Luther would hardly know what to think of the situation you find in Christianity today.  Some of us living today have the same problem.
Posted by Pastor Peters at 6:00 AM

Martin Luther said that ALL OF
SCRIPTURE POINTS TO CHRIST. This
means that Christ is the sole content
of Holy Scripture. Everything in the
Holy Bible is focused on Christ
who was the promised Messiah of the
Old Testament and the fulfillment
of that promise in the New Testament.
Our justification by faith in Christ
is the content of the gospel message.
There is nothing we can do for our
salvation, but believe in Christ.

Just one thing -- Bouyer didn't believe it. The day I take my clue on Lutheranism from a person who after three years as a Lutheran pastor converts to the RCC after reading the so-called Fathers will really be the day.

And why shouldn't the confusion about VII happen -- Bouyer was enormously influential at Vatican II, worked closely on the new Roman liturgy and ecumenism, and along with the future BXVI and others a co-counder of the conciliar journal Communio.

My guess is the passages come from his The Spirit and Forms of Protestantism, written in 1956. Just two years later he would write a book on good old John Henry Bleeding Cardinal Newman, who was also a member of his order.