The pain of being an ELCA bishop in Minnesota... 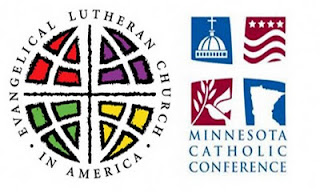 It seems the ELCA bishops of Minnesota and their Roman Catholic counterparts have been meetings rather informally for, what, thirty years or so.  This is not "official" dialogue but a friendly gathering in which they discuss things of interest or importance to both.  As far as I know there is no record of their discussions nor is their any public pronouncement at the end of their retreat.

What is of interest was passed on to me by a reader of my blog (HT to Robert).  Apparently the GLABT folks got wind of the meeting and are insisting that the ELCA bishops boycott the meeting in protest over the homophobia of the Roman Catholic bishops in Minnesota.  It seems that there is no end to the trouble that follows those ELCA folks.  For Missouri they are too ecumenical, for many Lutherans they are too captive to the GLABT agenda, for Rome they are lacking apostolic succession, for the Episcopalians they do not have flashy enough copes and miters, and now for the GLABT folks they are not bold enough to tell their friends they are homophobic... Ahhhhh... the pain.

You can read it all below:

The Rainbow Sash Movement is calling on the Minnesota Evangelical Lutheran Church in America (MELCA) Bishops not to meet with the Catholic Bishops of Minnesota this week, as they have for nearly 35 years, and if they do to condemn the sin of homophobia. The MELCA Bishops represent 1,145 congregations and more than 800,000 ELCA members in Minnesota.
As Gay/Lesbian Catholics we recognize that the Minnesota’s Catholic Bishops under the leadership of John Nienstedt, the Roman Catholic Archbishop of Minneapolis and St. Paul is promoting homophobia within the Archdiocese. While this ecumenical gathering claims to have common ground as its purpose; we are not so naïve to believe that such a meeting could not be used in the public square as being supportive of the Catholic Bishops war on Gay Marriage.
We are calling on the Evangelical Bishops to condemn the public aspirations of the Catholic Bishops to promote homophobia as an acceptable behavior when it comes to the legitimate aspirations of GLBT people seeking equality in the state of Minnesota. Not to do so might be seen as a sign of subliminal agreement and support for the Catholic Bishops opposition to Gay Marriage.
Should this meeting take place the Rainbow Sash Movement is than calling on Bishops of the six Minnesota synods of the Evangelical Lutheran Church in America (ELCA) to publically condemn the sin of Homophobia in direct Theological language. To do anything less would be tantamount to remaining silent in the face of violence that is directed at the GLBT Community, and in particular at LGBT teen suicide rates among our young.
In our opinion, It would also draw into question MELCA support of diversity within the larger body of Christianity, and their recent statement “to advocate for the common good of all people in the state,” issued by the ELCA Saint Paul Area Synod. The Rainbow Sash Movement is calling on all of the participants at this meeting to enter into a “Call to prayer , Conversion and Action around Issues of Sexuality”.

Posted by Pastor Peters at 6:06 AM

Rainbow Sash Movement is a (guess what?) Catholic organisation, btw. (There is a separate group by the same name in Australia.) The name derives from putting on a rainbow sash at the start of Mass, going up for Communion that way, and if denied returning to the pew and standing in protest thereafter.

"the Catholic Church and the teaching of the Church concerning true marriage as an indissoluble bond between one man and one woman, open to life, and the family and society founded upon it. The leaders of the "Rainbow Sash" movement intentionally confuse the faithful regarding the Church's clear admonition to respect all persons, including those with same sex attractions, and her absolute prohibition of homosexual sexual activity."

It would appear that this movement is not supported by the Catholic church.

According to Wikipedia the Rainbow Sash movement in Australia is ecumenical.

Being a Minnesotan, your post caught my eye. I don't think that this is much of a concern. There is a pretty wide variance of opinion within the larger group. The ELCA is an advocate for toleration, and, to others outside the fold, this is puzzling. The small minority here is aggressive in its efforts in a self-congratulatory campaign. "Publicly condemn the sin of Homophobia"? Are you kidding me?