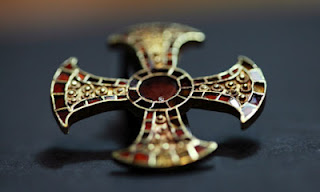 One of the earliest Anglo-Saxon Christian burial sites in Britain has been discovered in a village outside Cambridge. The grave of a teenage girl from the mid-seventh century AD has an extraordinary combination of two extremely rare finds: a ‘bed burial’ and an early Christian artefact in the form of a stunning gold and garnet cross.

The girl, aged around 16, was buried on an ornamental bed – a very limited Anglo-Saxon practice of the mid to later seventh century – with a pectoral Christian cross on her chest, that had probably been sewn onto her clothing. Fashioned from gold and intricately set with cut garnets, only the fifth of its kind ever to be found, the artifact dates this grave to the very early years of the English Church, probably between 650 and 680 AD.

In 597 AD, the pope dispatched St Augustine to England on a mission to convert the pagan Anglo-Saxon kings; a process that was not completed for many decades. Using the latest scientific techniques to analyze this exceptional find could result in a greater understanding of this pivotal period in British history, and the spread of Christianity in eastern England in the Anglo-Saxon period.

You can read it here or another source here --  both complete with video.  It is an amazing find. It gives great support to the impact of the Gospel as brought to England in the earliest days and it also gives evidence to the burial practice of the time.  Bed burial, whether cultural prior to the Christianization of England or not, certainly reflects the theological understanding of sleep as death.

I am oft reminded of Paul Maier's suggestion that archeology is the best friend of Biblical Christianity -- the more we find, the more secure and impressive the factual record of Scripture is found to be.  We don't need it but it does not hurt.  I simply could not help but pass this on...  especially during a week of facts upon which rest the foundation of our faith and the hope of our redemption!
Posted by Pastor Peters at 6:00 AM

Archaeology is certainly Christianity's confirmator. So sad that in the very country these things were discovered, the church no longer believes.

Archaeology may validate Christianity, but what about ancient writings? Do ancient secular writings exist that validate Christ's rising from the dead. Surely many high ranking Roman citizens must have seen him walking around 4+ days after His crucifixion.