A Tale of Two Mormons 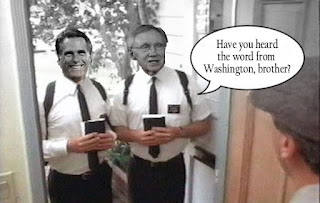 I certainly do not want to go on record as defending Mormonism but it did strike me funny the other day how Romney is being portrayed as "weird" for being a Mormon who pretty much heeds his church's positions on things while Harry Ried, another Mormon, is not "weird" even though he is a Mormon.  Happily for the media and liberals, Ried does not adhere in his public views as a Senator to the teachings of his church body.  He is, for example, pro-choice, even though Mormons are official pro-life.  So I guess the best religion is the one you disagree with and what makes the religious weird is when they not only agree with but attempt to adhere to the religious teachings of their churches (whatever they may be).

The question may be continued -- would Romney the Mormon be more palatable to Christians if he were a "bad" Mormon like Ried?  Here I guess is Luther's point about better an honest and able Turk than an incompetent and lying Christian... Personally, I have more respect for Mormons, and any other religious for that matter, when they are true to their confession than for those who treat their convictions as a buffet table from which they pick and choose the bits and pieces of which they will adhere to at any given moment.  I am not endorsing Romney nor do I know if he upholds every aspect of Mormon faith and practice.  Only I point out how differently the media treats the Mormonism of Harry Ried compared to Romney.

Apparently the media thinks that the best Roman Catholics, Lutherans, Mormons, etc... are those who ignore what their churches teach and do not allow their religious beliefs to influence what they believe or think in the public sphere.  No matter what the religion, it is that disconnect that makes me MOST nervous about those who claim a faith (whatever that might be...).
Posted by Pastor Peters at 6:00 AM

Is it me, or does it seem Mormons seem to be very pragmatic when it comes to politics. Between Reid, Romney, and Huntsman, they seem to be open to any political stance as long as they are able to get into office.

If you don't believe/adhere to your religion, then you don't really have a religion. You just hang out with that group for social reasons, and in the case of politicians to have some kind of moral identity card to play. Instead of guilt by association (why doesn't anyone blame Nancy Pelosi for priest abuse) rather it is propriety by association (the Catholic church teaches morality and Pelosi is Catholic, therefore Pelosi is moral). I also think politicians use their religious identity to influence the weaker members of their group to their political positions which conflict with church teaching especially on public morality.

American politicians have always been
able to recognize the need for some
religious affiliation as a moral
shield. It doesn't look good on any
resume to put NONE next to religion.

Before Newt Gingrich declared himself
a presidential candidate, he became a
Roman Catholic. His "conversion"
was an attempt to cover his tracks
after 2 divorces and look honorable.

I have a hard time thinking that Mitt Romney became a Mormon for political reasons since it is almost universally considered a political negative.

I have been a member of the Church of Jesus Christ of Latter Day Saints (Mormons) for 42 year and I believe Mitt Romney is an evil sellout. He does in no way, shape or form represent or reflect Latter Day Saint beliefs, and as far as I am concerned, he has betrayed the faith. The actual language of the church policy on abortion leaves a small window for a woman to save her life or extricate herself from incest or rape situations. I have personally met both a person who was the product of incest( incidentally by mentioning this policy) and also a mother who was raped by a serial rapist who moved to protect her son from the stigma associated with being the rapist's son. I don't like abortion at all, and I believe far too little emphasis is given to the alternatives to an abortion, such as a c-section or adoption, which those who wish to keep abortion widely available try to keep out of people's minds.