Not on the sanctoral or ferial calendar 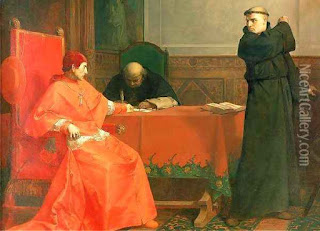 I have copied here a posting from a Roman Catholic blog because it records the confusion even Romans have with the two Cajetans.  I have oft heard Lutherans complain that the opponent of Luther was canonized for his opposition to the German monk.  Now, it appears, even a Roman Catholic publication has made the same case of mistaken identity.  So I post the whole thing here for your illumination.  Whatever they may have had in common, the Cajetan who opposed Luther is no saint but the founder of the Theatine Order is.  I am sure you were dying to know this.

” The saint who opposed Luther”?

Posted on August 7, 2012 by Schütz
Well, this is curious. Today [August 7] is the feast day of one Saint Cajetan, one of the “Spirituali” and a member of the Oratory of the Divine Love along with Carafa (who would become Pope Paul IV), Pole (who would become the Archbishop of Canterbury under Queen Mary) and Contarini (who would confer with Melanchthon at the 1541 Regensburg Colloquy) – the relationship between the four and their role in the early days of the Counter-Reformation would make a very good book. St Cajetan, with Carafa, was the founder of the Theatine Order, and his dates are October 1, 1480 to August 7, 1547 (which is why today is his feast day). You can find his Catholic Encyclopedia entry here and his Wikipedia entry here.

The one thing you will not find in his Catholic Encyclopedia entry is any record of his meeting with Martin Luther in 1519, because, as his Wikipedia entry says, Saint Cajetan “is not to be confused with his contemporary, Cardinal Thomas Cajetan”. It was the Domincan Cardinal who met with Luther, not the Saint. (Just as an aside, it is very interesting to note that from Tetzel to Cajetan to Eck, Luther’s opponents were almost all Dominican – which gives some support to the idea that the Reformation was, in its early days, an issue between the Augustinians and the Dominicans, much as later there would be conflict between the Dominicans and the Jesuits over the doctrine of grace; Pope Leo could have been quite correct in assuming that it was all a “squabble between monks”). Cardinal Cajetan was born in 1469 and died in 1534. His Catholic Encyclopedia entry is here. If one consults the his Wikipedia entry, one will find a similar warning to that found in Saint Cajetan’s entry: that “he is not to be confused with his contemporary, Saint Cajetan, the founder of the Theatines”.

Given this simple and repeated warning on Wikipedia, it is a little surprising that this article in the Catholic Herald does just that. To be fair, article itself only notes that Saint Cajetan “was, like his contemporary Martin Luther, deeply concerned by the worldliness and decadence he saw among the clergy.” But it seems that an editor made the error of connecting today’s Saint with the Cardinal who met with Luther in 1519, and hence gave the article the title “The Saint who opposed Luther” and illustrated it with a picture of Cardinal Thomas Cajetan OP.

One sometimes encounters the complaint that Vatican appears oblivious of facts that could be learned simply by consulting Wikipedia (the Williamson Case comes to mind). The Catholic Herald is not the Vatican, but the same holds true. A simple consultation of Wikipedia would have spared the venerable journal this embarrassing mistake. However, let he who is without sin cast the first stone. I have myself in the past confused the two. I won’t do it again!