Read the article and note how "Lutheran" comes up... 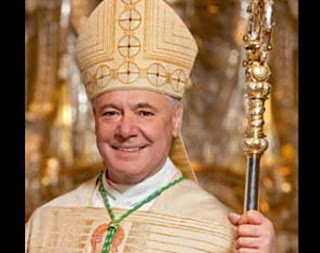 In May of 2005, Archbishop William Levada—who had headed the Archdioceses of Portland (Oregon) and San Francisco—was appointed prefect of the Congregation for the Doctrine of the Faith. In July of 2011, having reached the age of 75, Cardinal Levada duly submitted his resignation from that important curial post. Almost a year later, on July 2, the Holy See announced that Levada’s successor at the CDF would be Bishop Gerhard Ludwig Müller of Regensburg.

With these words the Catholic World Report introduces us to the Bishop who is prefect of the Congregation for the Doctrine of the Faith (arguably among the most important -- if not THE most important -- of the Congregations or Offices of the Roman Catholic hierarchy).  The introduction reveals a person well equipped for the great responsibilities assigned to him.  What is significant, however, is to read through the CWR article and see how "Lutheran" figures in the background and presumed future of this man and his new office.

Some have much of the mentions, others think it may be much ado about nothing.  It occurred to me, however, what irony it would be if Rome actually determined that the Augustana was indeed a catholic confession but at the same time could not find a Lutheran body that confessed what the Augsburg Confession said and practiced in accord with this Confession.  I for one have no doubt that what was presented in Augsburg is indeed a catholic confession.  My doubts and fears lies with those who have either deliberately violated its spirit and words or redefined them to justify their own indulgence with mainline Protestantism on one side and Evangelicalism on the other.  Even in Missouri, which is the last great hope for Lutheranism in the US, we have left unchallenged those Pastors and congregations whose stated beliefs and well documented practices are in conflict with the doctrinal standard every parish constitution affirms.  We have a long way to go and before we worry ourselves about how Rome might judge our Confessions, we need to rekindle confidence in their words and reform our own practices to conform to them.

Is Rome softening its stance on some issues from Luther's time? Regarding Lutheranism, what more can the Roman Catholic church say? I thought Rome judged the Lutheran Confessions 500 years ago.

Most members of non-denominational churches are former members of "mainline" churches. How does the church growth movement "grow" the church if in fact it has only succeeded in enticing existing church members to change denominations? Sheep stealing? You bet.

IF many Catholics are also quietly leaving the church for the non-denominational seeker-church down the street, then how is the Roman Catholic church responding?