a ‘behavior’ but now popularly an ‘orientation’ 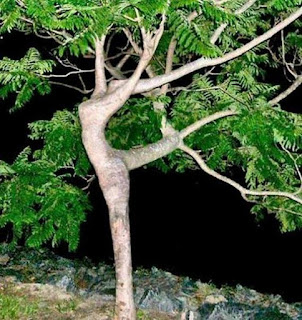 Absent some belief in a divine reason for and creation of the context and purpose of sexuality, we are left with either the notion that we are all sexual perverts and deviants or nothing is perverted or deviant except the compulsion of others.

Recently reality TV has provided an introduction to some of the strange paraphilias, once hidden and now on display,  ranging from arousal by stuffed animal toys (plushophilia), machines (mechaphilia) or even trees (dendrophilia).  TLC's "Strange Sex," in its second week, airs tonight with two new episodes @ 9p & 9:30p Central time. The show regularly airs on Sundays and re-airs on Mondays. For upcoming episodes, visit TLC's website.

These strange addictions are strange only because they represent a minority of people.  They are wrong only because belief in a Creator and a context have rendered them not only errant but opposed to their God-given purpose.  Without this religious and moral definition, we may still find some of these paraphilias odd but we have few legitimate grounds to restrict or prohibit them.

In the past, behavior has been the object of Christian preaching and teaching while the subject of inclination has been left for God to sort out.  Now we find ourselves tearing down all the barriers between inclination and behavior and substituting the idea of orientation.  Presumed in orientation is that the person will inevitably and act in accord with this orientation.  In the past, repression of desire was not seen as something evil but as the mark of a higher morality.  St. Paul over and over again addresses self-control as one of the key identifiers of Christ faith.  We do not give in to our passions but restrain them and control them.  Contrast this with the modern idea of sexuality in which youth is inevitably framed in sexual terms and we presume that no age possesses the ability nor should it be required to say "no" to that which is "natural" desire.  The job of the culture is then to provide for the safe expressions of these desires -- certainly in terms of disease but also in terms of the responsibility for the actions themselves.

Does God hate the homosexual any more than He despises any other?  Or does God despise the behavior itself -- the sinful behavior of all sinners no matter what it is?  We Lutherans are accustomed to confessing that we are by nature sinful and unclean.  It is our acknowledgement that not only our behavior is flawed but also our desires.  Nevertheless, we also cling to Jesus Christ and His atoning work as the basis for our confidence that we are loved by God and forgiven.  Implicit in this repentance is the admonition from God to go and sin no more.  The issue here is not whether we will sin any more but whether we struggle to restrain, suppress, and control the desires of the heart that give birth to sinful thoughts, words, and deeds.  This internal battle is the focus of the Christian life every bit as much as the devil who roars about us seeking to devour us.

Without this we are left with two real but depraved choices.  Either we are all sexual perverts or deviants or else there is no wrong or evil (except perhaps the compulsion of another against his or her own will).  This is the point that Christian faith and teaching present to the world.  Absent a notion of God and of divinely intended morality, we have nothing to prevent any of the paraphilias and our distaste for or prevention of any of them becomes merely a matter of personal taste.

The Christian point in this is not which things constitute perversion or deviant behavior but what hope there is for all and the power of this hope to offer boundaries and restraints for the unrestrained desire that can only enslave and ultimately consume us.  As long as sound like we are telling the world which sinners God loves and which sinners God hates, it will be about the sins and the difference will be arbitrary and artificial.  We come not to distinguish the sin but to confess together we are all sinful and unclean, all sexual perverts and deviants, by nature to be sure but also in active thought, word, and deed.  Yet even in this honest confession lies hope for the God who bids us to speak out loud our secrets has come to cleanse the sinner and to set us from the bondage which none can cast off.  Forgive us, renew us, and lead us that we may delight in Your will and walk in Your ways.  That, too, is part of our confession.

I am reminded of a couple of examples.  One is the old Jack Lemmon movie "Mass Appeal" in which a young seminarian confessed his sexual history with "Parisiennes and Parisiettes" and how he yearned to be free from the passions for each which had left him wounded and broken.  The other is a personal story.  One Sunday morning following the Divine Service a member asked me when we started communing known homosexuals.  "The same time we began communing liars, cheats, thieves, gossips, adulterers, and every other form of sinner," was my reply.  If we lose the distinction between inclination and behavior, we Christians are left with either a God who stands for nothing and loves everything or the sad state of perversions for whom there is no hope of redemption.  We must be careful here.

Our bodies are for the Lord, and the Lord for our bodies. We who have become united with the Lord by baptism and who are in the Church in Christ, are one Body with Him [Eph 1]. We are one spirit with Him and His Spirit. Our bodies are temples - bodily churches - of the Holy Spirit. Our calling cannot simply be defined by or pursue what is our desire. We have been given life within a new kingdom where sincerity, love,  faith, hope, and, yes, self-control are the higher values. This kingdom is not some far off reality but near to us and we to it. The challenge of each Christian is to set the heart after Christ - not only to believe, but to live out this faith in words and deeds shaped by the values and goals of the Kingdom.  We do this not as a people wearing our own righteousness of behavior but Christ's righteousness as our baptismal gift and possession. Living out this baptismal new life means self-control on the one hand, and perseverance in love on the other.

This is something God has been bringing me an understanding of. Sin is sin. And lust is lust. No matter whom or what we lust after, God does not look kindly upon it, but does not look more or less kindly upon one rather than the other.

It IS in fact a behavior that, if we put our faith in Jesus Christ and the Word of God is something that we knowingly need to practice self control with.

The other issue with this topic that I've ran across in the same context is that people of the homosexual orientation (as they see themselves) want to be treated equally as everyone else and not be looked at as a minority with limitations. But as they seek out equal treatment, they are drawing attention to themselves as being different and therefor creating the division between themselves and heterosexuals (as they see everyone else).

Bringing it back to your original point, if they were only able to see it, not as an orientation, but as a behavior that is one God does not condone, they would see that sin should not have special treatment or rights but be given to God because Christ has already paid for it and that we are to "Go and sin no more" or rather that we are to trust in Christ and live for His will.

Thank you for touching on this topic. I know it's not a popular one in the world in which we live but it is one that the world needs to hear and be confronted with.

We are all unaware of the depth of our own Sin...

Absolutely wonderful article - excellent and clear application of the Gospel!!!!!

With the amount of Law and the absence of the Gospel typical of so many Lutheran Pastor's blogs, especially on the topic of homosexuality, I was starting to think our Synod was becoming a liturgical evengi-bapti-costal denomination.

Post like this make me think there is still hope for our Synod to proclaim the purity of God's Word in both Law and Gospel as we are called to do.